British Airways and Avios, Finnair and Finnair Plus, Hilton Honors

Tomorrow, as part of our unofficial series of “reviews of new luxury hotels in European tourist spots operated by chains where you might have reward points or free night certificates“, I will be looking at the brand new Hilton in Tallinn, Estonia.  (EDIT:  our review of Hilton Tallinn Park is now live and is here.)

Tallinn is unfairly best known as the Finn’s cheap drinking destination. One of my best friends who is from Finland warned me of hundreds of Finnish stag and hen parties in Estonia’s capital. She also told me that taking the ferry from Helsinki is not a good idea – but we had already booked the tickets …..

Besides the cheap booze (relaive to Scandinavian alcohol prices), Tallinn is becoming an increasingly popular short break destination for the rest of Europe. With the opening of the new Hilton and also because Estonia was on my list of countries I wanted to visit, I made my way up to Tallinn.

Getting to Tallinn from London

…. is surprisingly tricky.  easyJet flies from Gatwick but there are only two departures per week on Monday and Friday.  Ryanair has four flights a week from Stansted but they leave at 6.45am.

I came back on easyJet on the Monday afternoon service which is conveniently timed at 4.35pm.  Going out on Friday evening, I decided to see how it could be done using Avios.

The easiest route is to fly via Helsinki on Finnair or British Airways.  As Finnair flies from Manchester, Dublin and Edinburgh as well as London, you don’t have any excuse if you live outside the capital.

There are connecting flights available from Helsinki to Tallinn on Finnair.  They do not show on ba.com as being bookable with Avios because they are operated by a Finnair subsidiary.  American Airlines does show them as being booking on AA miles so BA may be able to do it via the call centre.  AA wasn’t showing any availability for my dates so it was not an option – and it would have meant I didn’t get to see Helsinki. 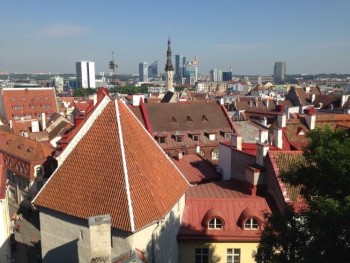 My trip started on Friday evening with a late (and delayed) British Airways flight from Heathrow Terminal 3 to Helsinki where I was going to spend the night at the Hilton airport hotel.

There isn’t much to say about the flight, except that this salmon in Club Europe was actually very nice. 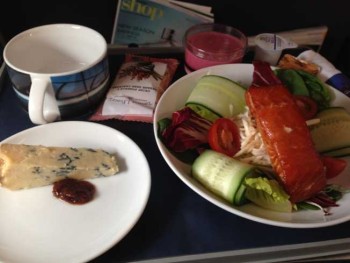 I arrived in Helsinki around 1am and made my way straight to the Hilton Helsinki Airport hotel. As I did not have a private sauna in my room (some rooms do – I was hoping that Rob’s Diamond status may have done the trick, but it didn’t), the hotel sauna closed at 10pm and I had an early start the next morning, I went straight to bed.  You can read Rob’s review of the Hilton Helsinki airport hotel here from his trip last year.

The hotel’s Executive Lounge was closed on Saturday and I had breakfast in the main restaurant in the morning. I was incredibly happy to see proper bread and a large selection of fish, cheese and hot dishes! 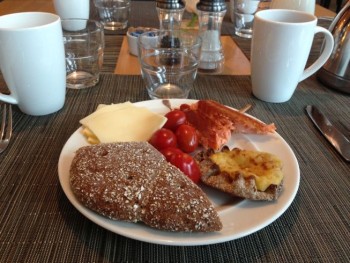 There is a newly opened train station at the airport with trains into Helsinki which is a quicker connection than the bus or a taxi. From the Hilton it is a 10 minute walk to the station. As you leave the hotel turn right and walk across the parking lot, turn left onto the main road, keep walking and from then on there are signs leading the way to the station.

Unfortunately arriving at the station doesn’t mean you have arrived at the platform: 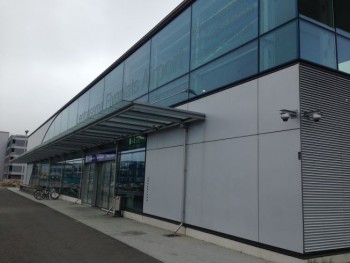 From the station entrance to the platform is another 7 minutes walk starting with a long way down (I took the escalator but the lift would have been faster). 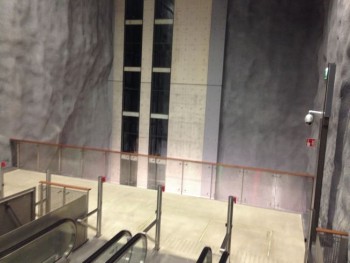 Then you have to walk through a tunnel – note the exposed rock on both sides: 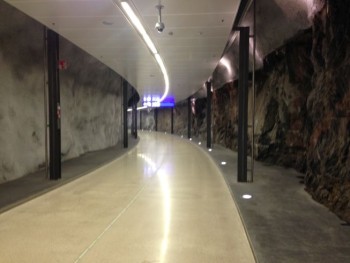 until you finally arrive at the platform. 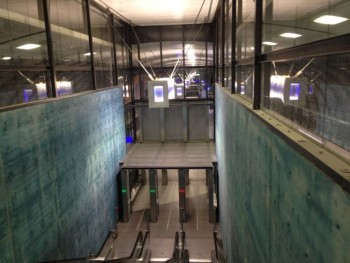 There is also an entrance directly from the airport.  Google Maps said walking from the Hilton through the airport to the station takes about the same time (good to know for a rainy day). There are two trains with different routes from the airport to Helsinki.  I trains take 34 minutes and P trains 28 minutes. 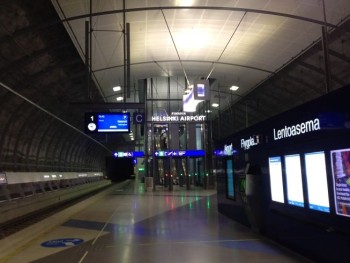 A ticket to Helsinki costs €5.50. The ticket machine only takes card payment. However once I boarded I found out that you can also buy tickets on the train. 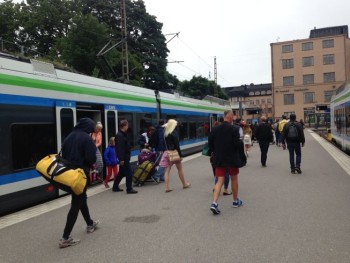 If you planning to head to Tallinn via Helsinki, you should really try to spend a day in Helsinki as well as it is a lovely city in the summer months.  Unfortunately I had to press on.

When I got to Helsinki I had 1 ½ hours until the departure of the ferry and decided to have a quick stroll through the city centre. Coming out of the station cross the road, turn left and then right and you will find the tourist information centre where you can get a map. 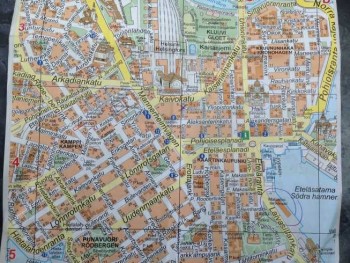 Unfortunately it was Midsummer’s Day and the shops were all closed ….. great timing.

There’s a pretty Russian style church in the city centre: 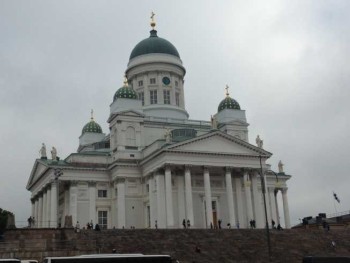 Around the corner from the church was a street market with typical Finnish crafts: 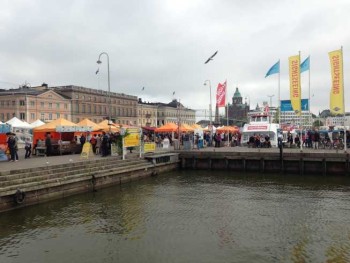 The terminal for Linda Line was only another 5 minute walk: 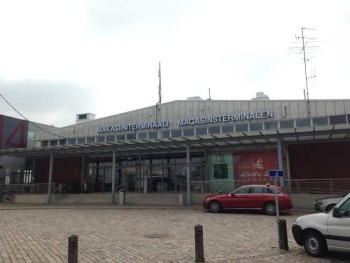 I reckon if you walk straight from the station to the terminal, you should arrive within 15-20 minutes. However if you do have a bit of time to spare, you should walk around and take in the city.

Linda Line is the quickest connection from Helsinki to Tallinn and also has the most central departure point in Helsinki.  It takes about 1 ½ hours from coast to coast. 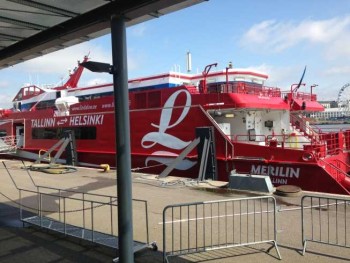 The ferry was very empty, probably because of Midsummer’s Day. My friend told me that the ferry is always overcrowded with drunk people who get even more drunk on the ferry and then continue drinking in Tallinn …… luckily there was none of that. 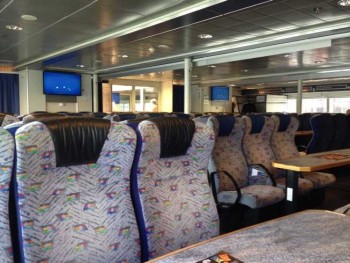 Included in my Linda Comfort Class ticket for €50 (booked online the week before) was a sandwich and a glass of wine but neither the sandwich nor the wine were very nice. At least there was unlimited free coffee and soft drinks.  A standard class ticket was €35 so the additional €15 is worth it if you would be buying refreshments anyway. 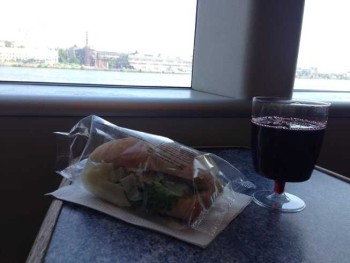 The ferry has a small duty free shop (alcohol and chocolate) and you can go onto the upper deck which is a pleasant spot when leaving Helsinki. 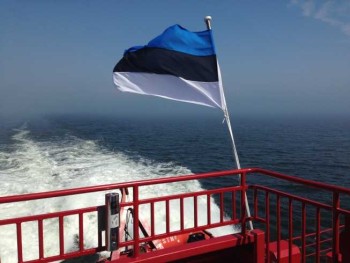 When I arrived in Tallinn taxis were waiting in line. It took about 10 minutes to get to the Hilton Tallinn Park, reviewed tomorrow, and the fare was €7.

As an Avios redemption this is a very pleasant weekend break.  Helsinki is 15,000 Avios return in Euro Traveller or 30,000 Avios return in Club Europe on a peak day, plus £35 / £50 in Reward Flight Saver taxes.  If you travel on Finnair you will pay the same amount of Avios but full taxes – £113 in economy and £126 in business return departing from London.

If you took a morning flight to Helsinki you wouldn’t need to stay there unless you wanted to break your trip.  With the Helsinki airport train, the ferry and the taxi from Tallinn harbour being very reasonably priced, it doesn’t add much to the cost of your trip and you get to see a second city.

Flying back on easyJet, Tallinn to London

I want to mention my return flight briefly.  It was very simple – a 10 minute taxi ride to Tallinn airport, two hours on easyJet and the train back to London from Gatwick. 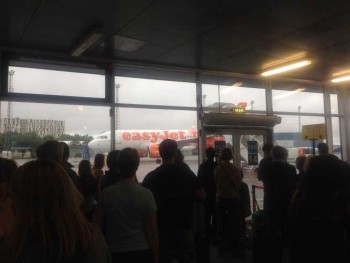 I was told that Tallinn airport is very small and boring which is why I only left the hotel about an hour before my flight. However the airport was actually very pleasant with cute cafes and a great play area for children. 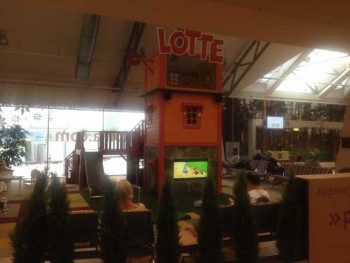 And if you are looking for an upside from Brexit: 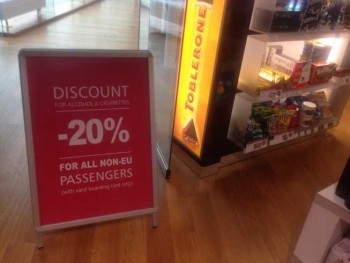 British Airways and Avios, Finnair and Finnair Plus, Hilton Honors