It was exactly a year ago that I launched Head for Points.   I had actually started writing it at the end of May, but no-one actually knew it existed at that point!  I wanted to run it for a few weeks in private to be sure that I could actually find enough to write about and enough time to write it.

It was July 2nd last year that I put a post on FlyerTalk announcing that it had launched.  Ironically, because there was five weeks of content for people to read on the first day, I got a huge number of page views on Day 1 – it then took me six months before I hit that level again!

The original version of the site looked like this, for readers who have joined since our relaunch in February 2013 and who never saw the old ‘yellow and black’ ad-free version: 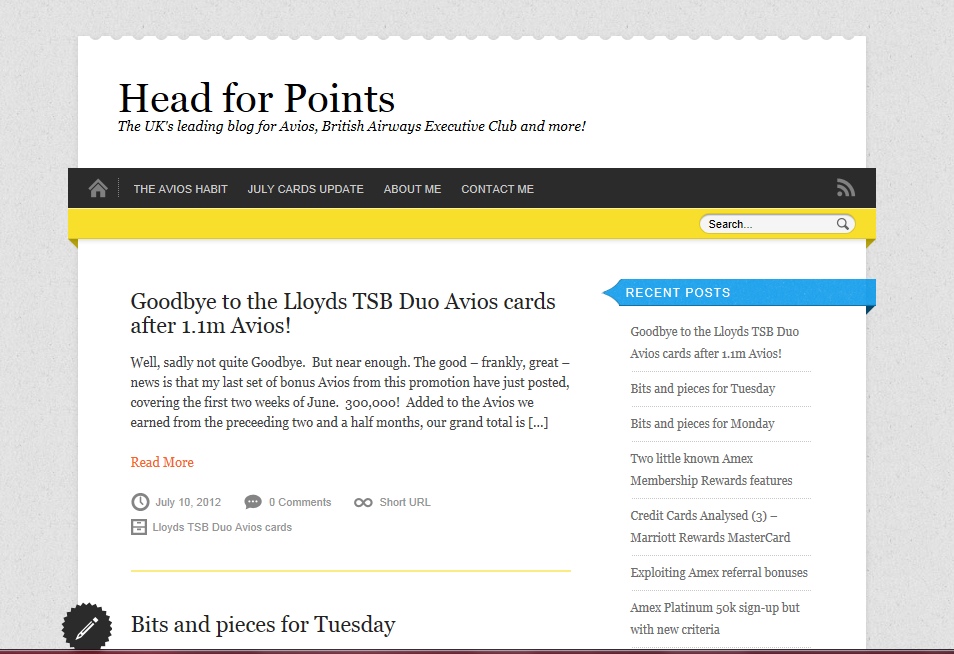 There are probably about 50 people who are responsible for how Head for Points looks today.  You may even be one of them, without knowing it!

A lot of the most interesting posts were also triggered by reader emails, which I always enjoy receiving.  It was a reader email that persuaded me to look into the 3V cards seriously, for example.  If you have an idea for a future post, or if you receive news of an interesting promotion by email which you think is worth sharing, please do forward it on to raffles [at] headforpoints.co.uk.  This is genuinely a collaborative venture, since with the best will in the world I can’t keep up with every loyalty scheme.

I hope you’ve enjoyed reading the blog and will continue to do so.  Thank you for your support so far.