There was a major protest in Central London yesterday by black cab drivers.  They believe that Transport for London should not have licensed taxi app Uber because only black cab drivers are allowed to charge passengers using an in-car meter which balances both time and distance.  Uber argues that the fares are not calculated by an in-car meter and so they are within the rules.

Uber has not taken this quietly, although I admit I was pretty surprised by their response. 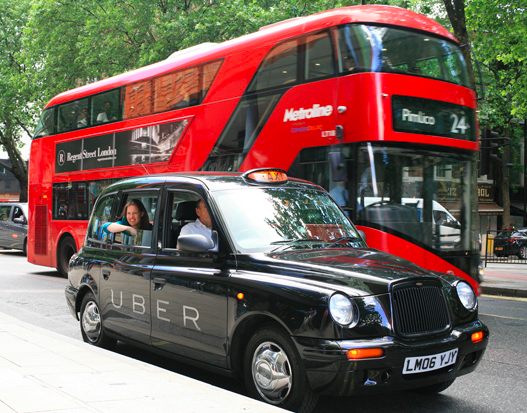 Yesterday Uber announced the launch of UberTAXI.  This allows you to call a black cab via the Uber app.

Is this a joke or not?  It is difficult to tell.  An ‘UberTAXI’ option has appeared in the Uber app albeit no cars are currently available.

One thing that makes me think it is not a joke is that I found a trade article which said Uber is only charging 5% commission versus the 10% taken by Hailo.  However, as most black cab drivers consider Uber to be their sworn enemy, I’m not sure than an additional 5% will make much difference.  It is difficult to imagine many black cab drivers signing up for this.

(To put this in context, when Hailo applied for a minicab licence recently to allow it to offer executive cars alongside black cabs, a large number of Hailo drivers quit in disgust.  These drivers have presumably been picked up by Get Taxi.)

The irony is that the main loser from all of this is probably Addison Lee.  The fact that AddLee is rarely mentioned these days is a symbol of how it has fallen.

The founding family cannily sold out for a reported £300m to private equity house Carlyle in 2013 and the company is presumably now carrying a substantial amount of bank debt.  We stopped using AddLee before that – after regularly spending £300 or so a year with them – because they decided to stop carrying child booster seats.

As part of its PR offensive yesterday designed to rub sand in the eyes of the protesting black cab drivers, Uber launched a £15 credit via HFP for new members.

If you download the Uber app on your iPhone or Android device and use the promotional code HEADFORPOINTS your account will be credited with £15.  This is enough for a decent ride in one of their UberLUX vehicles or a couple of trips in an UberExec or UberX car.

If you already have an Uber account, you could open another for your partner.  Remember that you will need access to a unique mobile phone number as they send a confirmation code as an SMS.  Mobile phone numbers which have already been used by Uber are not accepted.