Crossrail (aka the Elizabeth Line) runs directly past our office here at Moorgate and we have the daily joy of finding our way through the maze of closed streets.  My wife has it even worse – her office, which used to overlook the park which was Finsbury Circus, has overlooked a massive tunnelling site for the last five years.

What made all this disruption worse was the knowledge that Crossrail was not going to serve Heathrow Terminal 5.  The original plans, which you can see below, have trains branching off the mainline to Terminal 2/3 and then on to Terminal 4: 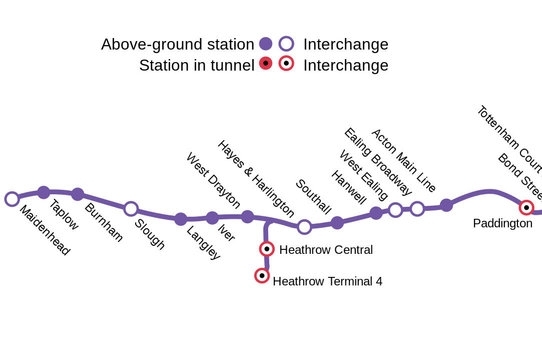 Heathrow announced yesterday that there has been a major last minute rethink.

Starting in 2019, there will be two Crossrail trains per hour running to Terminal 5.

In total, there will be 22 trains per hour from Central London to the airport.  In theory we could make it in 35 minutes from our office to Terminal 5.  This will comprise:

Discussions are underway on ways of creating additional train paths to allow a total of four Crossrail trains per hour to serve Terminal 5.  This is unlikely to be solved in the short term, however.

In other Heathrow rail news …..

From March 2018, Heathrow Express will become part of the Oyster payment system.  Anyone with a pay-as-you-go Oyster card will be able to touch in at Paddington or Heathrow.  You will also be able to pay using a contactless credit or debit card.

Don’t get too excited – fares aren’t going to get any cheaper.  You just won’t need to fiddle around with your credit card at the ticket machines.