The new generation of fuel efficient airlines, driven by the Boeing 787 ‘Dreamliner’, was meant to open up new possibilities for low-cost airlines to operate on long-haul routes. We haven’t seen much proof of it so far, until yesterday.

Norwegian, the, erm, Norwegian budget airline, has announced three new routes from London Gatwick to the US. 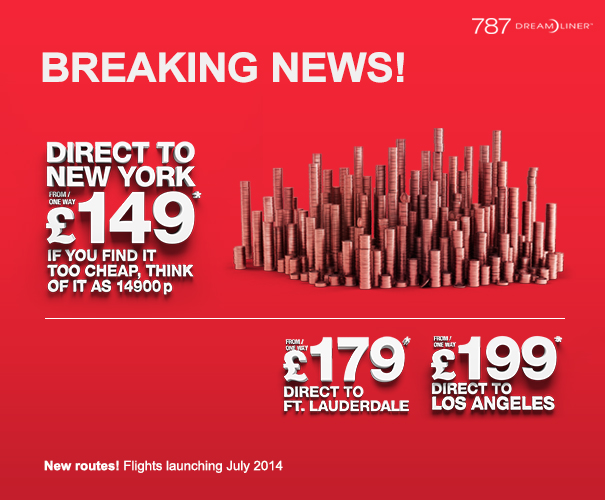 New York will cost from £149 each way

Fort Lauderdale will cost from £179 each way

Los Angeles will cost from £199 each way

Norwegian will, of course, charge you for ‘extras’. A checked bag will be £20, food and drink is chargeable, seat reservations will be chargeable. (There is a ‘set menu’ of one bag, breakfast, dinner and seat allocation available at £30 each way, which seems reasonable.)

Importantly, tickets are available at these prices. At the time of writing (3pm Thursday), EVERY flight to New York in August 2014 is available at £149 each way.  You can buy one-way tickets as well, if you want to mix and match with an Avios or Virgin Flying Club redemption the other way, perhaps coming home overnight on a flat bed.

Don’t forget that a ‘free’ flight on Avios in economy to New York next August will cost you 40,000 Avios plus £359 in taxes and charges …. compared to £300 cash on Norwegian.

(On the other hand, a BA Silver flying to Los Angeles on a cash ticket would be earning around 20,000 Avios if they flew BA. Throw in lounge access, free catering, free seat reservation etc and BA may still look like better value even if it cost £200 more.)

It remains to be seen how sustainable this model will be long-term. Even with a 787, you can’t make money on a 6 hour flight selling every seat at £300 return, especially given UK Air Passenger Duty. It will be interesting to see how BA and Virgin respond, though.

One hint on future pricing comes from the ‘premium’ cabin on these flights, which will offer a 46 inch seat pitch. This is far less attractive in terms of pricing compared to the competition – New York is coming out at £1,200 for instance. ‘Sale’ fares on legacy carriers from London in business class can occasionally be had for £1099 or a touch more. I can imagine those £300 return fares drifting nearer to £600 before you know it.

It is also worth noting that all three services – New York, Los Angeles and Fort Lauderdale – will be done using just one plane. You’d better hope there are no more B787 technical problems ….