For a few weeks now, Virgin Atlantic Flying Club has been running a special promotion in conjunction with Little Red.  Little Red is the Virgin domestic airline which is running services to Heathrow from Manchester, Edinburgh and Aberdeen.

In theory the promotion is simple.  If you fly Little Red, the cabin crew will offer to match your existing British Airways status to the same level in Virgin Flying Club.  You will also receive 10,000 Virgin miles f0r a Gold match and 5,000 Virgin miles for a Silver match.

Unfortunately the execution of this match has been poor.  I would have written about it earlier but I did not have proof that it works OK until last week. 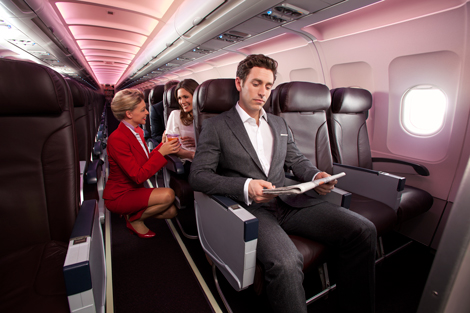 This is what happens.

The cabin crew announce on your Little Red flight that they will match your BA status (if you have your BA card on you) to the identical Flying Club level.  Needing to have your BA card with you is the first snag.

On request they give you a form to fill in.

Here is the second snag.

Both the form AND the cabin crew announcement imply – but do not state explicitly – that you must be a NEW Virgin Flying Club member.  There is no space on the form to write in your existing Virgin number.

This is weird.  After all, if you fly enough with British Airways to get Silver or Gold status, it is likely that you would have a Virgin Atlantic account even if it is rarely used.

I have an existing Virgin account, as did the colleague I was travelling with.  We both filled in the form but did not write our existing Virgin numbers on it (there wasn’t a box for it anyway).  The crew collected the form.

Two weeks passed.  Neither of us had heard anything from Virgin.  I emailed the Virgin customer services team at customer.services [at] fly.virgin.com to ask what was going on.  In that email, I specifically said that I was trying to match my existing Virgin account and provided the account number.

I attached a copy of the application form.  My colleague was a smart cookie and told me on the plane to take a photo of the form with my iPhone.  Luckily I listened to him!

Nothing happened for a few more days.  I then had an email from Virgin asking for a scanned copy of my British Airways Gold card.  I had one of those on my PC anyway so that went across within a few minutes.  10 minutes later I got an email saying the match was sorted – and it was.

In terms of Gold benefits, the key one for most people would be Virgin Clubhouse access when flying Virgin Atlantic in economy or premium economy.  You also receive lounge access when flying Little Red, although there is no Heathrow lounge at present until the move to Terminal 2 is complete in September.

I have no idea when this offer ends.  Every few days someone posts on Flyertalk that it is still active but there hasn’t been a report for a few days now (but neither has anyone said it has finished!). (EDIT – was still alive yesterday, see comments)

If you had time on your hands, this is not a bad deal.  A cash ticket on Little Red to Manchester would be under £100 return on most days.  You could use Avios to fly one way to save a few ££ and, if you had some, use Virgin Flying Club miles to fly the other direction.  The cost of the ticket would be offset by the 10,000 Virgin miles if you are Gold (it is more marginal for 5,000 miles if you are only BA Silver) and any benefits you get from the Gold card would be a bonus.

My tip is to fly FROM London on British Airways and the other way on Little Red.  You can then use the BA lounges at Heathrow.  At Manchester, Virgin uses the Aspire lounge which you can access using a Priority Pass or Lounge Club card and which is surprisingly pleasant.