Even that is a bit puny by Vegas standards.  This Wikipedia list of the largest hotels in the world features six Las Vegas hotels in the top 10.  The Mandalay Bay can only squeeze in to number 8. 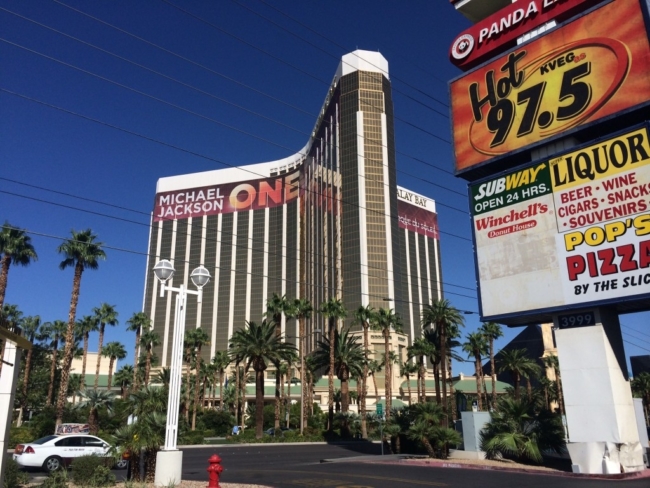 These hotels typically run at over 90% occupancy, and effectively 100% at weekends.  Can you imagine what it is like checking in, going to the breakfast buffet or getting a lounger at the pool in a property with over 4000 rooms?!

Add in the fact that I was only there for three nights and flying directly in from London, it seemed stressful.  There was an alternative, though.

The top five floors of the Mandalay Bay operate as the luxury Four Seasons  Las Vegas hotel.  It has its own separate entrance and its own quiet swimming pool (below) and restaurants.  An unmarked (well, almost unmarked) door gets you onto the casino floor at the Mandalay Bay. 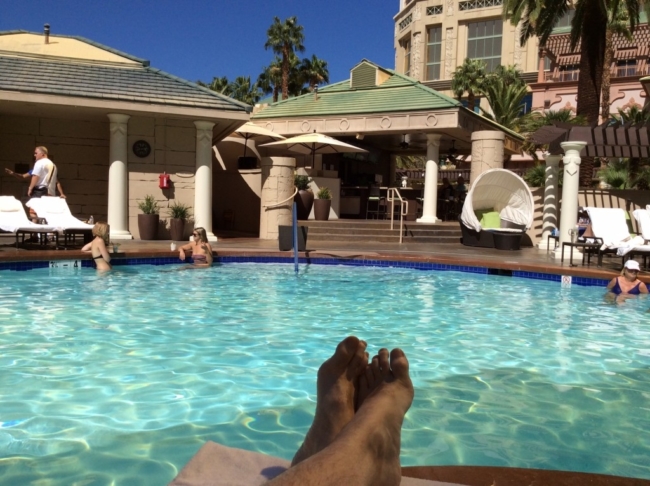 The key selling point of the Four Seasons is that it is like a ‘normal’ hotel! Instant check-in, instant check-out.  No problem getting a spot by the pool (they even remember your name).  No queue at the restaurant.  For Las Vegas, these things are unheard of!

The rooms have recently been refurbished.  My suite was impressively done, although it could have done with some additional lighting: 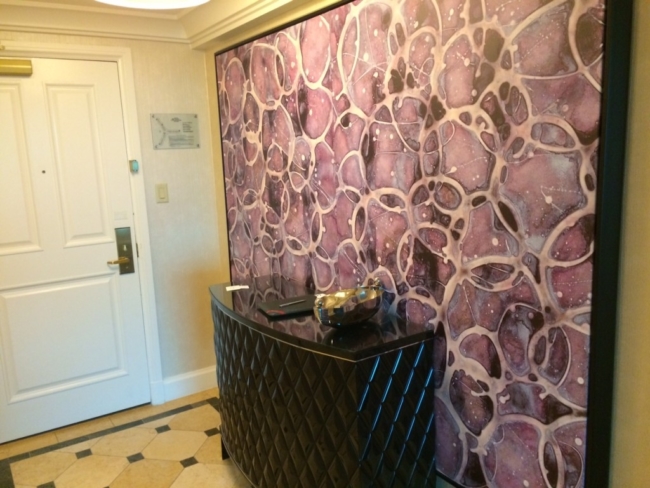 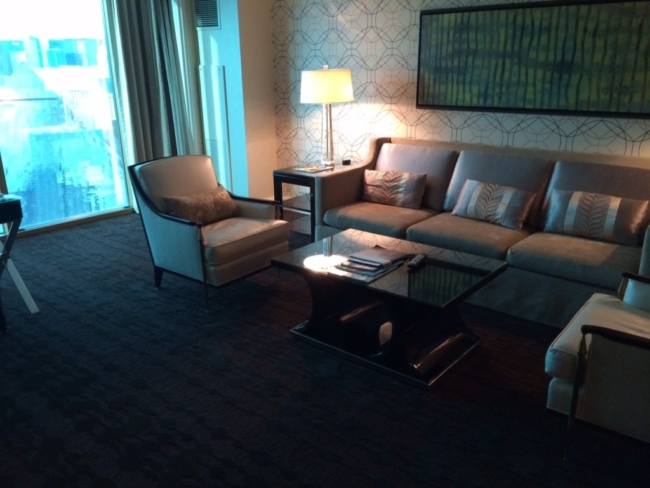 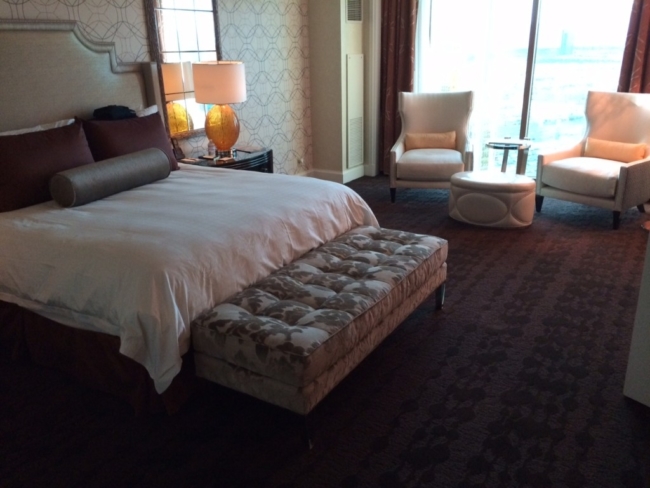 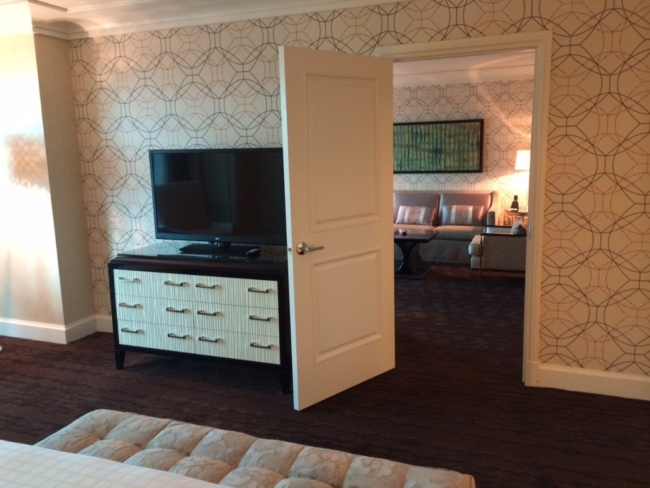 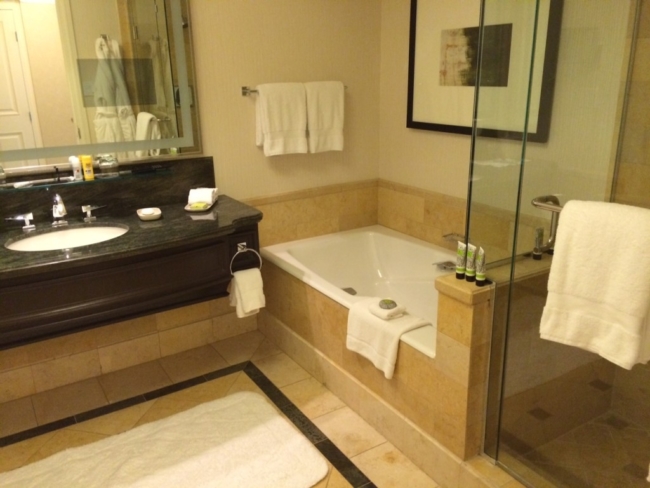 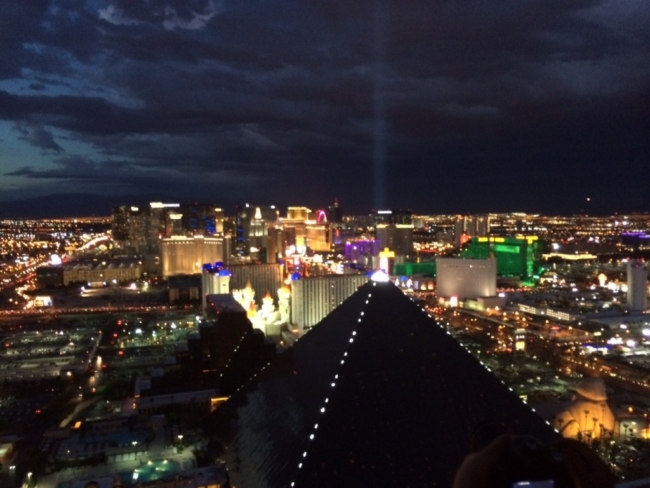 You can’t really fault the rooms.  However, it is a ‘Four Seasons Lite’ property – George V in Paris it is not.  The layout of the property and pool feels like a compromise because they had to share the available space with the far bigger Mandalay Bay.  The walk from the hotel lobby to the lifts is ludicrously long, for example.

Some other niggles could have been fixed.  The weather was hitting 35 degrees when I was there, but I didn’t get any free water in my room.  (I did a small bottle for free at check-in.)  They were happy to sell me overpriced water in the minibar though.

There is also, as with most hotels in Vegas, a $28 inc tax ‘resort fee’ added to your bill each day.  This is effectively an additional room rate charge – the hotel argues that it includes the hotel wi-fi, but Four Seasons wi-fi is usually free for suite guests anyway.

When I asked to use a computer for a few minutes, I discovered that the Four Seasons Las Vegas has no business centre (and this is effectively a business hotel for many of the guests).  I was directed to a wall-mounted terminal next to a pay phone which had to be used standing up and which cost $1 per minute.  Luckily I found a FedEx office in the Mandalay Bay where I could sit in a cubicle with a proper PC for 40c per minute.

Should you stay here?  I think you know in your heart if it’s for you or not.  For some people, part of the Vegas experience is being in a hotel with 3,000 rooms, walking through a casino to get to the lifts, having loud music playing in the pool area and joining hundreds of others for a monumental breakfast buffet.  I have done that myself in the past.

I may even have done it this time if I had been there midweek when it is quieter.  My main focus this time, though, was to be able to relax in the few quiet hours I could eke out around the conference.  The Four Seasons Las Vegas did the job from that point of view.

(If you want to compare the Four Seasons with the main Mandalay Bay property, Brian Cohen wrote a review of his room on his blog here.)

There is a Mandarin Oriental in Las Vegas now with no casino.   The Vdara boutique hotel, in the same complex as the Mandarin, is also casino-free.  The trade off is that rooms in the casino hotels are hugely subsidised – on the Sunday I left, the Luxor hotel next to the Mandalay Bay had rooms on hotels.com for £34 (plus resort fee).  The price gap between the casino and non-casino hotels means that peace and quiet comes at a cost.

PS.  I booked the hotel via hotels.com.  It had a ‘3 nights for the price of 2’ deal which was not available on the Four Seasons website.  I will get a further 10% back via their Welcome Rewards programme assuming I can get to 10 nights before they devalue their scheme.  The net cost was about 65% less than we pay for a similar sized room at Four Seasons Hampshire, which partially explains the ‘Four Seasons Lite’ nature of the hotel.