Back in August I wrote about ‘the luxury retail project’ – the plan to rebuild much of the south area of Terminal 5 as a destination for luxury shopping brands. 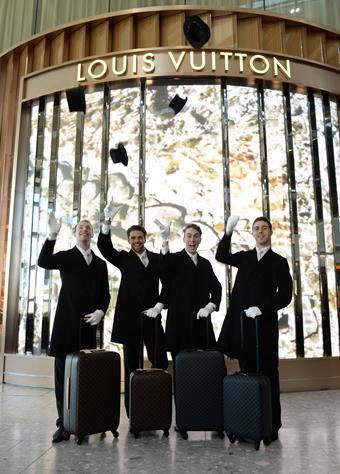 I was told that it was to be a relatively modest store focussing on travel goods.  Since it turns out to be 301 sq m, twice as big as my house, that seems unlikely.

I couldn’t get down there to see it, but according to Heathrow:

The Louis Vuitton Heathrow store is flanked by an articulated series of metallic striped glass ‘fins’ finished in bronzed anodized aluminum. On the entire perimeter of the façade are a sequence of hanging transparent units hung by Louis Vuitton belts, recalling the artisan heritage of the Maison, and allowing visibility straight into the store.

Inside, a considered open space makes the store’s offering of leather goods, women’s ready to wear and shoes, accessories, sunglasses, fine jewellery and watches easy to navigate. Look up to see 80% of ceiling surface crafted from suspended aluminum blades ranging from a gold oak brushed veneer to others clad in hand crafted bronze and gold wallpaper. A feeling of warmth is felt throughout, communicated by sumptuous beige leathers, polished plaster in light gold, smoked teakwood and antique brass metalwork.

So now you know!