This article is my review of the Business Class Studio aboard the new Etihad A380 aircraft.

London was the launch route for the Etihad A380.  When I flew it in late January, the aircraft had only been in service for a month and was as pristine as you can get.  Etihad has gone for a traditional layout with First Class and Pearl Business Class on the upper deck and Coral Economy Class on the lower deck.

Unlike Emirates, you cannot board from the lounge at Heathrow. Etihad uses Gate 10 in Terminal 4 which is directly opposite the lift to the lounge.

There are 70 seats in Pearl Business Class on an A380.  For comparison, Etihad’s Boeing 777’s only have 40 seats.  Business Class was less than 50% full but this could have been done on purpose – if the one and only A380 had teething problems, Etihad would have had to substitute a smaller aircraft. 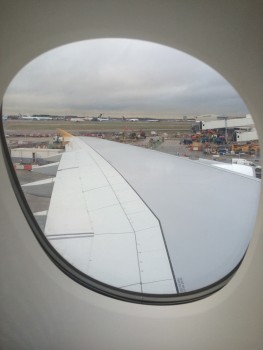 The layout is interesting with shades of the British Airways yin / yang approach.  Take a look at the picture below.  In the middle block, you can either a) face forward but sit very close to the person in the adjacent seat – albeit you can put up a screen divider – or b) face backwards but have a substantial amount of space between you and the other passenger. If you sit on the left or right hand side, you can either a) have a window seat and face forward or b) have an aisle seat and face backwards.

Note that – unlike British Airways – every passenger has direct aisle access without needing to step over anyone else.

I had seen the ‘Business Studio’ seat at World Travel Market back in November so it wasn’t a complete surprise.  As well as the A380, this seat is also being installed on the new Boeing 787 fleet.  Here is my seat – which extends into an 80 inch bed if required – and a view looking forward towards the huge 18 inch TV.  As with Qatar and Emirates, Etihad has a huge IFE selection although I did not spend much time with it. In terms of space and comfort, it is clearly a substantial improvement on BA Club World, especially for the solo traveller.  The difference between Emirates A380 and the Qatar 787 / A380 / A350 seat is less clear cut.   All Emirates and Qatar seats face forwards which some may prefer.  Qatar seats are in a herringbone layout so you are not facing straight forward – but no-one is facing backwards.

Having flown all three in the last six months, I would say that the difference between Qatar, Etihad and Emirates business class is minor compared to the gap between the Middle East carriers and the BA offering – as long as you pick the right aircraft type.  The Etihad A380 bar is something special as I will show tomorrow.

Etihad has a special page on its website devoted to the new Business Studio seat if you want to know more.

It is worth touching on service for a minute.  The Middle East carriers recruit from across the world.  There are a huge number of British cabin crew members working for Emirates, Qatar and Etihad but also a large number of other nationalities.  I have found in the past that this can lead to communication difficulties and it is not uncommon for the wrong food or drink to be brought or for crew to struggle to follow an English-language menu.

That was not the case with Etihad.  There was an exceptionally high level of service from every crew member I dealt with.  I have no doubt that Etihad has carefully cherry picked the initial A380 crew members but at the same time I also found the staff in the Heathrow lounge to be very responsive.

I did have two issues.  The first is that the aircraft did not have any Monday newspapers.  On boarding I was offered a copy of FT Weekend (published on Saturday) despite it being 8.45am on Monday!  The alternatives were the Sunday papers.  This might just about be acceptable for a 6am departure – although first editions are available in London from 10pm the previous night – but for a 9.15am departure it is not acceptable.

Etihad is also charging for wi-fi.  I know there are capacity issues on aircraft, but I still don’t like to have to pay even if it was ‘just’ $12 for 2 hours.  The good news is that there is no data cap – I bought 10MB on Qatar in October and it disappeared very quickly.  I have never used the Emirates A380 wi-fi but their website states that 10MB is free and 500MB costs a nominal $1.

In Part 2 of this review (click here), I look at the food and drink and the on-board bar, which is a totally different concept from Emirates and Virgin.