Here is some news in brief that accumulated whilst I was running around Stockholm (SAS), Toulouse (Airbus) and Heathrow this week – which accounts for the slightly disjointed flow of articles recently.  There are some very interesting stories from that trip to come next week, but for now:

KLM and Air France have launched a number of business class deals to the US and Canada (some flights are operated by their codeshare partner Delta).

Prices are certainly not dirt cheap but could work for some.  Toronto is the cheapest at £1,899 return – these are prices from the UK.

It is also worth checking the Air France link if you planning travel to the Middle East (£1200-ish) or Latin America (£1,500-ish).  Here is the new look Air France business class cabin – do check which aircraft currently have it before booking. 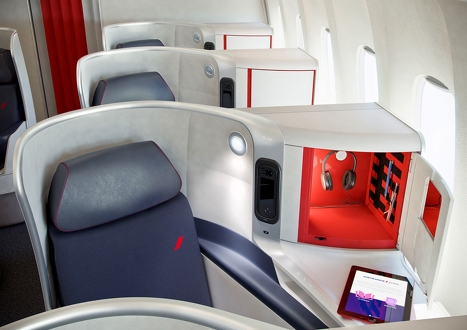 If North America is on your mind, it is worth remembering that British Airways is still offering exceptional Club World fares out of Copenhagen.

I won’t go into these fares in detail again here.  As an example, though, last night I priced Copenhagen to New York JFK at 9,624 DKK for August.  That is just £932 for a return Club World ticket.  It is well worth having a play around at ba.com to see what you can find.

If you are worried about ways of entertaining the children over the May half term holiday, South West Trains has brought back its ‘kids for £1’ offer. Adult fares are also capped at £12 as part of the offer.

Tickets are valid across the SWT network from May 18th to May 29th and must be booked a day in advance. Details are here.