It is that time of year when the newspapers are desperate for coverage to fill their pages during a quiet Summer.  British Airways is doing its bit with this story – one which, as the picture shows, involved creating a brand new British Airways Executive Club Gold card design from scratch! 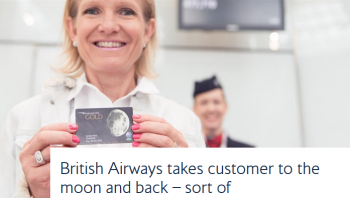 To celebrate 46 years since Neil Armstrong landed on the moon on July 20, 1969, British Airways has surprised one of its most loyal customers who has already flown enough miles to get there and back.

​ andra Reid from Kingston-upon-Thames, who was the most recent member of the airline’s loyalty programme, the Executive Club, to fly the 477,710 miles, was presented with the equivalent number of Avios points at Heathrow Terminal 5 ahead of the anniversary of the landing this week.

The 55-year-old marketing executive clocked up the miles visiting destinations ranging from Corfu, to Cape Town to Amsterdam.

Mrs Reid said: “I know I fly a lot, but I was really quite shocked when British Airways contacted me to say I’d reached the moon and back. It’s a really lovely way to be thanked for my loyalty and I’m now deciding where to go next with the Avios they gave me – they tell me I can get a first class return ticket to Australia or take the whole family to New York. Either way, I’ll be staying on this planet!”

James Hillier, from British Airways’ Executive Club, said: “We are always looking at ways in which we can thank our most loyal members and personalise their travel experience, so we’re delighted to surprise Mrs Reid. It’s no mean feat given that you need to spend 40 days or 955 hours in the sky to hit this landmark.”

However, Mrs Reid still has a long way to go to catch up with one very local BA jetsetter who has flown 6,741,868 miles alone – the equivalent to 23 return trips to Australia. 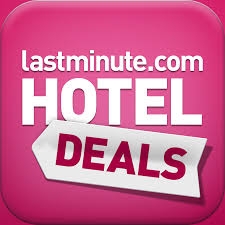 Until 10am today, lastminute.com is having another sale on its ‘Top Secret’ hotels in London.  It is not as good as the last deal, where they had rooms for £29, but there may be value to be had.

The offer page is here.  You can often work out the hotel by pasting parts of the description into Google.  Alternatively, do a dummy booking – options for booking restaurant tables etc are often given during the booking process which give the game away.