In order not to appear to be unduly criticising British Airways again (see my main article today!), I will assume that this is a genuine improvement to services and not a cost cutting move …..

From the end of next week, hot food is to be removed from Euro Traveller on ‘Band 4’ short haul flights.  There will now be no short haul routes serving warm meals down the back.  This includes:

The new cold meal – which we should assume is an improvement on the old hot meal – will be served in a box and not on a tray.  Again, I don’t want to suggest in any way that this is a downgrade as I’m sure there are good reasons why eating out of a box is preferable to eating off a tray.

Club Europe will continue to receive a hot meal but the side salad is to be removed.  Difficult to spin that bit in a positive way, to be honest, unless a lot of customers were accidentally spilling the dressing onto their clothes or something …. 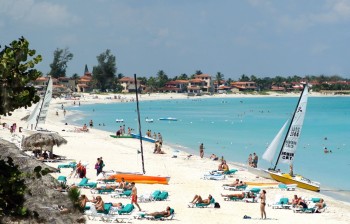 Virgin Atlantic announced a raft of changes for Summer 2017 yesterday.

The most interesting is that, from April, Virgin will fly from Gatwick to the Cuban beach resort of Varadero, photo above.  There will be one flight per week to complement the existing two flights to Havana.

The other changes are:

Gatwick to Montego Bay reduced from three to two flights per week in May, June, September and October

Manchester to Barbados moving from one 747 flight per week to two flights on smaller A330 aircraft, with an additional third flight during the Summer school holidays

Remember that these changes are for 2017 and do not impact schedules for this year.