This is Part 2 of my review of the new JW Marriott hotel and resort in Venice.  Part 1 of our JW Marriott Venice review can be found here.

As I said yesterday, we spent three days at the JW Marriott resort in Venice over the August Bank Holiday.  Our Junior Suite cost 35,000 Marriott Rewards points plus €110 per night.  It was our second trip in two years and a few key changes had taken place as the hotel beds in.

This island isn’t huge.  You can walk around it in 10 minutes.  Bicycles are also available.

(In theory you are meant to pay the rip-off €39 per day ‘resort fee’ to use the bicycles but, as they sit unlocked outside the hotel, I really wouldn’t bother.) 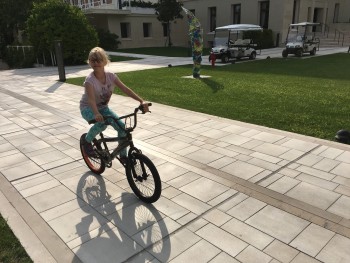 My biggest problem last year was that the hotel had 266 rooms and 40 sun loungers – and even those were split across two separate locations.  It was a joke.

This year the hotel has added some decking in the grounds and added another 75 loungers adjacent to the pool.  They were never all full during our stay so that is one problem solved. 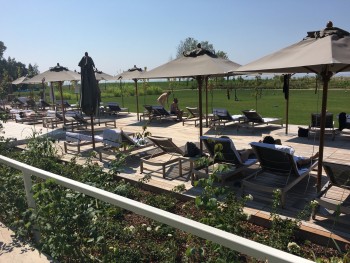 Let’s talk about the pool.  This is probably the worst kids pool ever built in the context of what could have been done.  I cannot understand what Marriott and the architects were thinking.  You have a WHOLE ISLAND to play with and you build a pool which is ludicrously narrow.

It gets worse.  As well as being far too small (the InterContinental Geneva pool I reviewed last week is 3x as big and that is in the middle of a hugely expensive city!) it is far too deep.  No child under 13 can stand in it.  There is no shallow end. 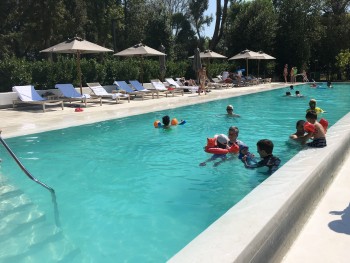 There are only about 15 sun loungers which directly face the pool.  As your kids can’t stand – and there is no lifeguard – you need to watch them at all times.  You can’t watch them from a lounger, though, because those go very quickly (usually to people with no kids).  Adults are forced to stand around the pool watching their kids.  It is a farce.

There is a bar and restaurant by the pool.  We had huge problems with food and service here but these could have been isolated events.  At the weekend they sell ice cream but during the week they don’t, for no logical reason at all (in August the hotel is equally full every day I imagine).

The kids playground has been improved this year with a mini parkour course: 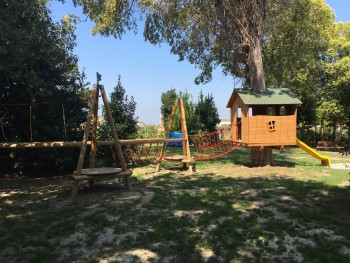 Anyone who visited in 2015 will remember that it had the worst kids playground ever built, and I’ve seen a few in my time …..

Up on the roof at JW Marriott Venice

The JW Marriott Venice roof terrace in the main building is the most successful part of the hotel.   But, yet again, they score an own goal.

On the roof is a paddling pool with great views towards Venice.  You can see how deep it is here: 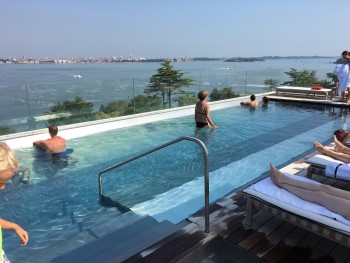 The restaurant and bar on the roof is impressively buzzy.  I should warn you that they have a huge problem with insects up until around 8pm, however, and most people choose to eat inside as you can see from the photo. 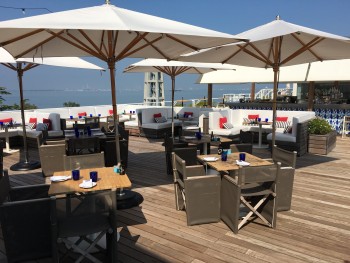 There is a lot to see on the island and, to be fair, we didn’t experience it all because of the children.

Here is the lobby bar.  Again, I was very impressed by the design: 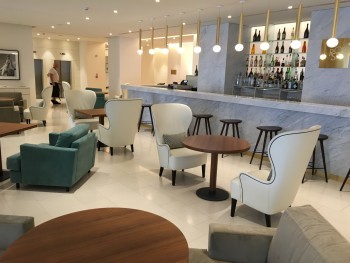 Dispensa is the hotel cafe.  It opens fairly late to stop you getting breakfast here instead of paying the chunky €29 (?) breakfast charge in the restaurant: 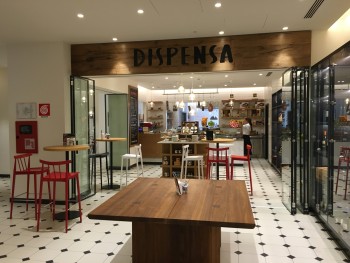 Breakfast in the restaurant is impressive, with prosecco daily.  You pay extra for cooked to order items, however: 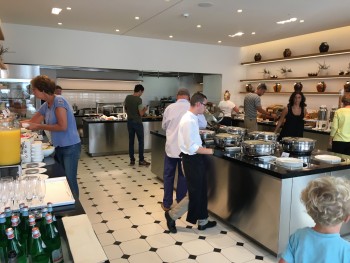 I popped into the JW Marriott Venice spa briefly.  It is classy but expensive and I wouldn’t be surprised if it was the best option in the city.  It has a small indoor and outdoor plunge pool which looks good: 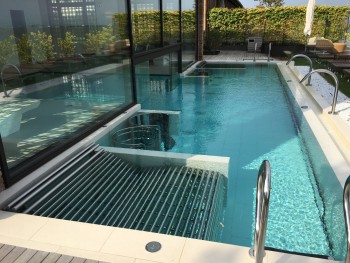 This is the garden of one of the suites in the cottages in the grounds: 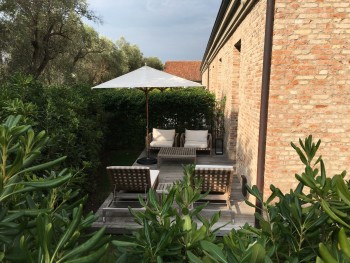 There is a fine dining restaurant in the grounds which now has a Michelin star: 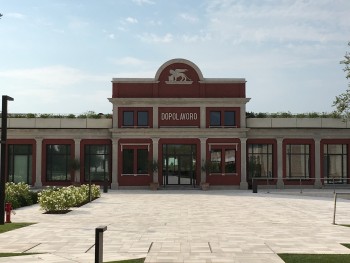 And there is a chapel if you want to get married: 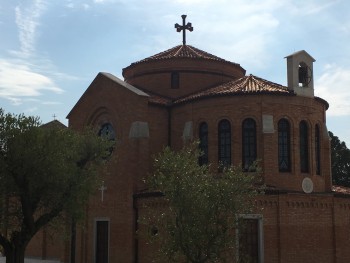 The JW Marriott Venice hotel shuttle boat runs every 30 minutes.  The frequency has been reduced from last year but it does run every 30 minutes without a break until after midnight.  I had a look at the timetables for the Kempinski and the Excelsior hotels and they run a worse schedule. 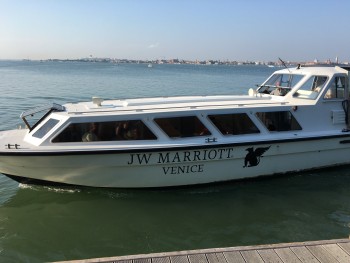 The boat takes 39 people.  If it is full, you will be waiting 30 minutes for the next one although that was never an issue for us.

Venice is a great place to come in August.  You don’t need to spend much time in the centre with the cruise ship crowds.  You can happily pass your days at the JW Marriott or take a taxi across to the Lido where the beach is impressive, and then pop into the city for a couple of hours in the early evening when it quietens down.

There are a lot of things about the JW Marriott Venice I like.  The design and furnishings are very well done – this is probably the thing that swings it for me.  The grounds are large and well tendered.  The rooftop bar and restaurant is cool.  The spa looks great and there is a fine dining option.  Having a Junior Suite with a balcony this year was a major improvement to our experience.  The shuttle service to St Marks was always punctual.  Breakfast is impressive.

It just falls down around the edges.  The outdoor pool is far too small and too deep for children.  The lack of loungers around it is a major failing.  The kids playground and kids club remain underwhelming.  Banning children from the rooftop paddling pool this year is stupid.  The service at the pool was farcical but we may have been unlucky.  The spa is overpriced.

For 35,000 Marriott Rewards points plus €110 per night for a €500+ junior suite, the JW Marriott in Venice was a very good deal indeed.  I doubt I would come back and pay full price – I would like to try the Cipriani or Kempinski, and the Excelsior on the Lido should be good when refurbished – but it is a good points option.   It is one of the very few places in Europe where you can get something aspirational for your Marriott Rewards points.