Norwegian has big plans to expand out of Gatwick, and the airport will be the first to experience an expanded Premium cabin.

In a clear bid to attract business travellers, Norwegian is pulling back from an exclusive focus on opening new routes and will instead focus on increasing frequencies to existing cities.

Gatwick will be the home for the 10 brand new 787 Dreamliners which will enter the Norwegian fleet this year.  These feature 56 seats in the Premium cabin which is 21 more than the current planes. 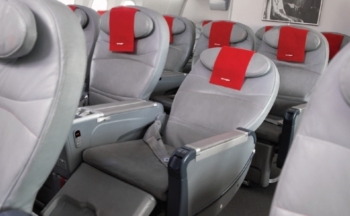 It has also announced plans to fly from London to South America and Asia, with possible flights to Tokyo, Shanghai and Beijing, once the airline receives access to the Siberian flight corridor.

In 2019 eight brand-new single-aisle Airbus A321neo LR will be added to Norwegian’s fleet with plans to serve the US East Coast and Midwest.  These are the same aircraft that Aer Lingus is buying to also use on the US East Coast.

The press release about the changes is here.  My review of Norwegian’s Premium seat is here.