Loganair, the airline which operates flights to the Highlands and Islands of Scotland, primarily from Glasgow, Inverness and Edinburgh, has launched its own loyalty programme.

The airline is probably best known for its service from Glasgow to Barra, where the plane lands on the beach and the flight times are adjusted to the tide table – see photo below.  Loganair will also be flying from Carlisle Lake District Airport from next month, to Dublin, Belfast City and London Southend. 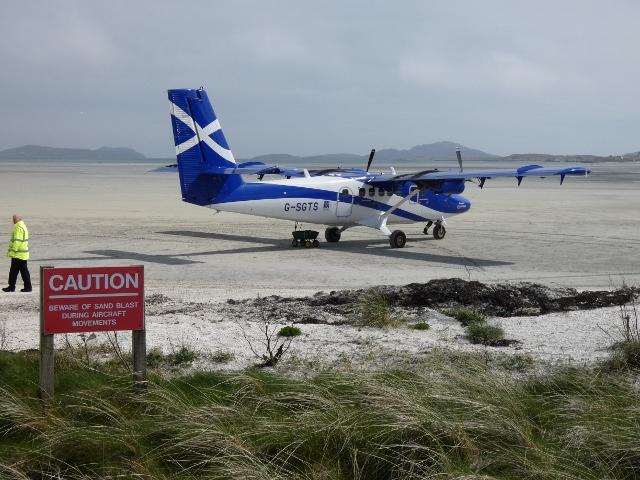 Now, is it worth joining Clan Loganair given that Loganair and BA have a codeshare deal?  Potentially yes.

What do I collect?

How do I collect points?

As the chart below shows you earn either 250 or 800 points per segment depending on whether you book a Fly/Fly Flex or Fly Flex + rate.

You can retro-claim points for any Loganair flights taken since 16th October 2017.

How do I spend points?

On this site you can check availability for redemption flights.  Tick “Redeem Clan Points”.

Taxes and charges are still payable.

How much are my points worth?

There is no easy answer to this.  What I can say is that, because Loganair generally operates niche routes without any direct competition, flights can be expensive.

Whilst redeeming airline miles for economy flights is usually a bad deal as the taxes and charges make up a very high part of the ticket price, this is not always the case here.

What happens when I book a Loganair codeshare with BA?

If you book a Loganair flight via ba.com you will not earn Loganair Clan points. You will, however, earn your usual Avios.

These are the current Loganair flights with a BA flight number:

Loganair flights from Inverness, Aberdeen, Edinburgh and Glasgow to the Highlands and Islands

Loganair flights from Glasgow, Inverness and, erm, Norwich to Manchester

It is worth noting that you cannot book these flights on a stand-alone basis with a BA flight number. They need to connect to another British Airways operated or coded flight. If you try to book Edinburgh to Sumburgh on ba.com, it tries to sell you Edinburgh – Heathrow, Heathrow – Aberdeen, Aberdeen – Sumburgh!

You cannot spend Avios on Loganair flights, even the codeshares.

If you don’t use Loganair often and can book your flight on BA, it makes more sense to do so and collect Avios.

However, if you fly Loganair a lot and are able to redeem your points for one of the more pricey routes, it’s worth signing up to Clan Loganair.  The sign-up page is here.