This is my review of the St Regis New York hotel.

Except …. it isn’t.  Three weeks ago I wrote a popular article about how I tried to maximise the $50 per day ‘destination fee’ at St Regis New York by incurring as many qualifying spurious charges as possible.

I promised a full review of the hotel but I came to realise that it simply wasn’t realistic:

My status got me $55 per day of free breakfast, so it was hard to get a feel for whether the food – which runs to $125 for their top omelette – is good value if you need to pay for it

Whilst my room was 60,000 points, any bookings after January 2019 will be 100,000 points on peak dates which massively changes the value proposition

If you were thinking of paying $1,100 per night – although it is often in the $700s – this is clearly a major shift from using 60,000 points and I think you’d be using different parameters than mine for judging the St Regis

I’m therefore just going to give you a few impressions and let you decide for yourself whether you’d want to try a standard room, which I haven’t seen.  Click the photos to enlarge slightly.

…. let’s cut to the chase.  I wasn’t hugely impressed.   And that’s despite all the perks above.

In terms of location, the St Regis is right in the centre of it all and I had no complaints.  Very close to Central Park with MoMA just a few minutes walk, the hotel is on the corner of Fifth Avenue and East 55th.  The entrance is tucked away on East 55th.

Let’s start with my suite.  Obviously having a 95 sq m suite for three nights was great, especially as I was working for much of the time and appreciated the space.  However, the suite was simply two rooms knocked together.  This was weird, although not unusual in my experience.

I put a one minute video of my Madison Suite on Instagram.  You can see it here.

I had two identical bathrooms, which means two baths, two showers and four sinks, but neither was particular large.  (There was some novelty in starting to brush my teeth in one bathroom and walking to the other to rinse.)  I didn’t like the brass fittings either: 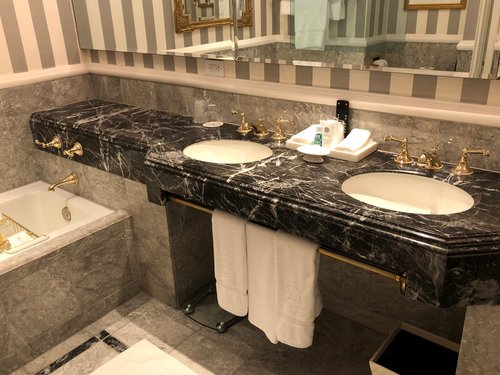 The look was too ‘heavy’ for my tastes, although I did admire the silk wall coverings in the bedroom: 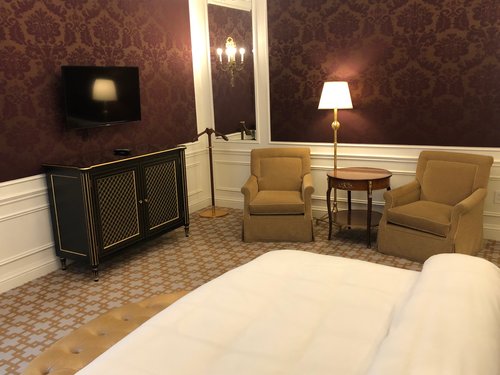 Whilst you can’t see from the pictures, there was no view from the windows even though I was on the 14th floor.   This was the living room – there is a decent desk in the foreground, albeit without built-in power sockets because it is a ‘real’ desk. 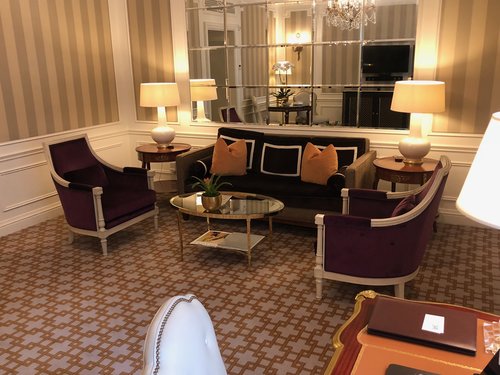 Oddly, what I REALLY loved was the corridor walking down to my room from the lifts.  There was something very classy about it due, again, to the silk wall coverings which the picture doesn’t quite bring out: 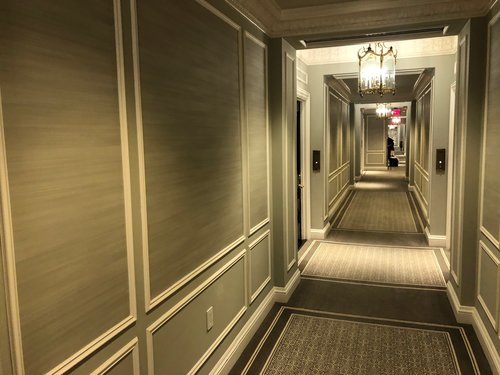 Where the hotel really fell down, I felt, was in general service standards and the lack of public space.

Let’s start with service.  It’s never a good start when the check-in clerk has to explain how you are being legged over for a $50 per night ‘destination fee’.  It must be hugely embarrassing to say it to those who do pay $1,100 per night on a peak day.  Note that no-one opens the door for you here – although there are doormen – and no-one escorts you to your room or shows you the facilities.

We then come to the fabled St Regis butler service.  In theory you get a butler for the duration of your stay. However, and this point is made over and over again if you look at other reviews, no-one explains what they can do.

When looking through the hotel guide I saw that I could order some coffee on arrival, so I did: 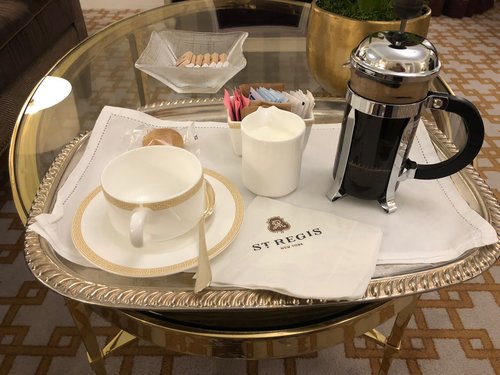 There is no coffee maker in the room.  The following afternoon I tried again but was refused.  I can have a free coffee before noon from the butler, but after noon I must call room service and pay roughly $20 for a cup ($8 tray charge, the cost of the coffee, 18% service charge, local tax).  It would probably have been cold on arrival too.  Day 2 and Day 3 I learned my lesson and ordered when I woke up, but having to get dressed purely to receive the coffee was something I could have avoided if I’d had a Nespresso machine.

The hotel even messed up billing. I had booked each night separately but the hotel knew this and had already linked them when I arrived. Each morning, however, I woke up to find a bill under the door for the previous night.  Random amounts of money were also put on hold each day on my credit card.  They had managed to put together a coherent combined bill at the time of check-out.

One other thing.  On Day 1, the restaurant was convinced at breakfast that I was called Mr Martin.  No idea why.  I was called this for the entire meal, by people who went out of their way to drop the name into the conversation.  On Day 2 and Day 3 I wasn’t addressed by name at all, by anyone.

Here is a library shot of the breakfast room at St Regis New York, which becomes a restaurant in the evening: 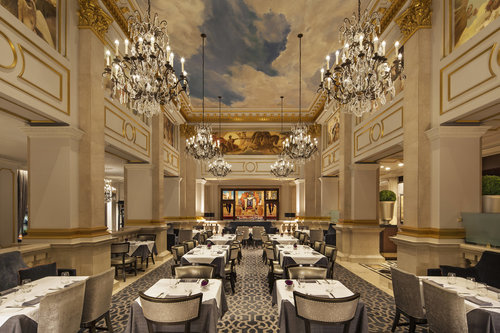 It is remarkably small with only about 20 tables, and it has to cope with a lot of outsiders coming in for a business breakfast meeting.  Now that elite members get free breakfast at St Regis – which only started in mid August – it may prove too tiny to cope.  On my third day I had to wait about 10 minutes which was not exactly premium.

Prices are huge, portions are huge.  Say ‘yes’ to the guy who offers you a glass of orange juice as you sit down and that is $15 + 18% service + tax on your bill, per person, before you’ve even got comfy.

Suffice it to say that there is no buffet here and everything is silver service and a la carte.  Served very slowly.  Whilst I got seated immediately on my 2nd day I had to complain after 10 minutes that the staff had totally ignored my presence, despite the small number of tables.

Again, this is a library picture of the small St Regis New York bar – the King Cole bar – just off the dining area.  It isn’t very big and, again, a lot of non-residents use it.  You will end up in here purely to spend your $50 daily food and drink credit that comes with your $50 destination fee.  There is a bar menu and I ate here twice in the evenings to get through my credit. 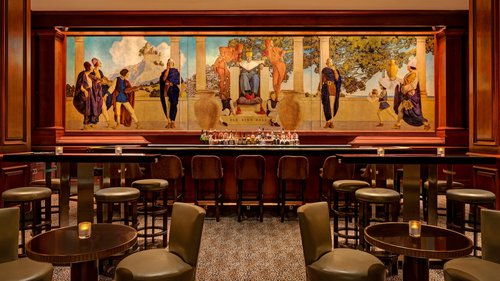 That’s about it.  You see, the hotel lacks public space.  It’s not the The Savoy or Claridges in London, or the currently closed Waldorf Astoria in New York.  If you’re not in your room there isn’t much other space to occupy.

In the basement is a small display of hotel memorabilia.  No-one ever sees it because it is in a corner few people even pass.  A sign confirms it doesn’t even belong to the hotel and is on loan. 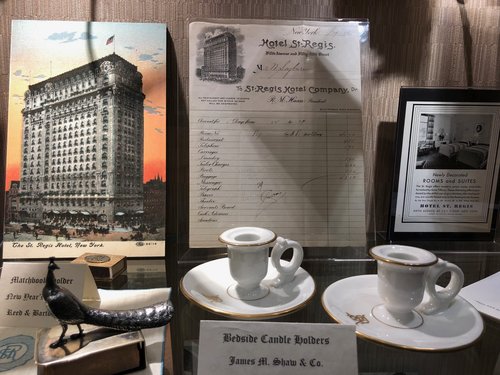 Lack of coherent ownership is an issue here.  Some floors, amazingly, were sold off as timeshare units so there are fewer hotel rooms than you think looking from the outside.  The portion of the hotel fronting Fifth Avenue, which contains retail, was sold off for a whopping $700m a few years ago when New York shop rents peaked.

You’re probably expecting me to say that I wouldn’t stay here again.  Except, potentially, I might.  Just once more.

Until December I can book for 60,000 Marriott Rewards points per night for a date in 2019.  That is a bargain compared to, say, 80,000 Hilton Honors points for Conrad New York (my preferred option) or 70,000 IHG Rewards Club points for The Barclay or InterContinental Times Square.  My best chance of an upgrade is at the St Regis too, although the Conrad is ‘all suite’ anyway.

There is ‘something’ about spending three days enveloped in all this.  Even though it consistently wound me up, I was always interested in what came next.  It is NEVER going to become my favourite New York hotel but I could do it once more, for 60,000 points, and I probably will.

The St Regis New York website is here if you want to find out more.