This is my review of Air France’s short-haul business class on an A320.

With Air France soon bookable using your Virgin Flying Club miles, once the various authorities give their approval to the Virgin / Delta / Air France / KLM transatlantic joint venture, I thought I’d take a look at what Air France long-haul has to offer as a redemption.

I booked myself a one way Business Class flight to Dubai.  Since I cannot use my Virgin Atlantic miles on Air France just yet, I transferred 42,500 American Express Membership Rewards points to Delta SkyMiles and booked from there (taxes were £321).

Transfers from Amex to Delta are INSTANTANEOUS which, as I wrote in this article, means that booking is stress free as there is no chance of losing your seats waiting for the points to arrive.

Taking Air France meant a connection in Paris.  At Heathrow, Air France uses Terminal 4.  Despite being the Cinderella terminal it is in decent shape although very quiet.  At 6.30am on a Tuesday the premium security channel was virtually empty and I was through in no time. 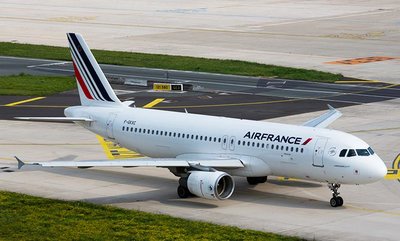 I reviewed the SkyTeam lounge in Heathrow Terminal 4 in this article.

Over the last couple of years I have been deliberately trying other ‘legacy’ short haul airlines in business class, as well as paying for ‘front row’ benefits on low cost carriers such as Vueling and easyJet, to see if anyone is offering anything special.  I continue to be disappointed.

There are a few reasons for this.  One is that the seating is very similar across airlines, even on the budget carriers.  Secondly, I always take a bulkhead seat so I don’t get caught out by BA’s tight leg-room in rows 2+.  Thirdly, especially as breakfast, I find the BA food to be more suited to my British tastes.

Let’s take a look at Air France short-haul business class seating.  As you can see, there is a decent amount of leg room in Row 1.  This is a PR picture: 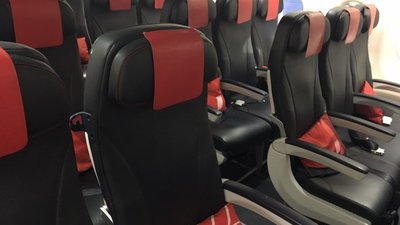 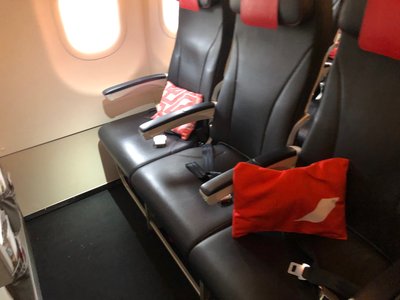 At least on my aircraft, the D-E-F seats had about 1cm more room than A-B-C.  The bulkhead on the A-B-C side has a window in it, however, which you may prefer to staring at a blank wall.

Do not sit in 1C.  I should have learned my lesson by now.  1C sticks out halfway into the aisle, more so (it appeared) than on other airlines.  Air France let me board first because I was in Business Class but this meant that everyone else on the aircraft banged into me whilst boarding.  It wasn’t good.

The middle seat is kept empty as you would expect.  There is no table covering it, unlike in Club Europe (although BA is removing these on new aircraft) and because the arm rests don’t swing out it seemed like a lot of wasted space.

The meal was the biggest oddity.  I’m really not sure what Air France is doing.  Take a look at the picture below. 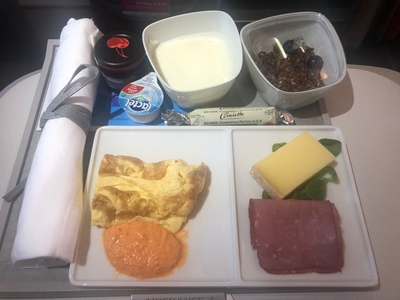 Bottom left we have chilled plain omelette with piquillo cream.

Bottom right we have one solitary piece of pastrami and a chunk of cheese.

Above that is a pot of chocolate granola with blueberries.  This does NOT come with milk and the crew gave the impression that I was the first person to ever ask for some.  They had little idea what to do and eventually turned up with seven sachets of UHT milk which I poured over it.  Impressively one sachet had gone off and the contents had turned solid.

Top left is a pot of quark.  The guy next to me thought it was yoghurt and poured his granola into it.  This is wrong, because quark is technically cheese.  The Air France menu card makes it clear that quark is part of the main meal and the granola is the desert.  My quark was also looking a bit odd and had to be replaced.

There was nothing about my Air France Heathrow to Paris flight to convince me that it is better than British Airways Club Europe.

This is nothing against Air France in particular – I would say the same about Lufthansa, SWISS, Vueling and easyJet who I have also flown in the past year.

The only thing that would make me choose this flight over a BA one is that Terminal 4 and the SkyTeam lounge are quieter than Terminal 5, at least in the morning.  The SkyTeam lounge was so empty that it actually felt creepy, however, and anyone with First Wing / Fast Track access at T5 is likely to find the overall BA experience more cheerful.

My trip was about to improve.  The next part of this series will look at one of the Air France lounges in Paris and the Air France Boeing 777-300 long-haul experience which isn’t at all bad.

The Air France website is here if you want to know more.