On Monday night we were invited to the Virgin Atlantic offices in Crawley for the A350 cabin reveal.  Since Rob was on a family holiday in Scotland, I went down to take a look. Here’s my impression of what happened during the event, as well as a quick overview of the new economy and premium economy seats, which we didn’t cover in our full-write up of the new Virgin Atlantic Upper Class suite.

On a side-note, I live-blogged the event on our Instagram page – and you can check out a highlights reel on our story.

Virgin Atlantic now has an official website up for the A350 which you can find here.

At the launch party

I was invited to join them at The Base, their crew training facility in Crawley.  They had a mock-up of the new cabin which they will use to train crew safety and cabin service on the new aircraft and seats.

I was in “Boarding Group 1”, which meant I was one of the first people to get the tour of the new aircraft. 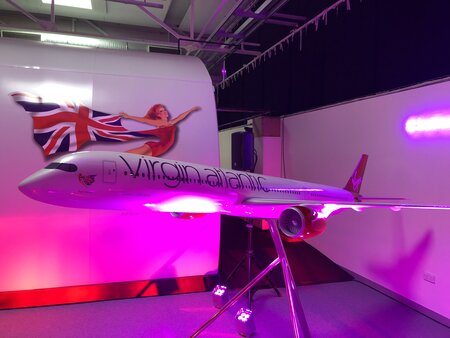 We were first shown a video introduced by Head of Customer Experience, Daniel Kerzner, explaining some of the design inspirations they took for the A350:

Virgin has always been good at marketing itself and this video is no exception.

After we’d watched the video we were escorted into the mock-up cabin itself, entering via the new “The Loft” space, which all passengers (including economy) will see when boarding. This is a good marketing tactic for Virgin Atlantic, as I’m sure they’ll hope it will drive some upgrades and contribute to Virgin’s brand image.

The Loft replaces the bar area.  It has a higher capacity than previously as well as allowing passengers to remain during turbulence, thanks to integrated lap belts. 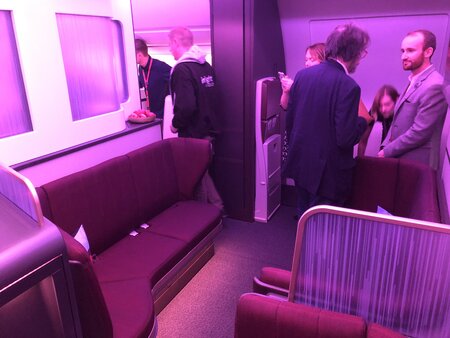 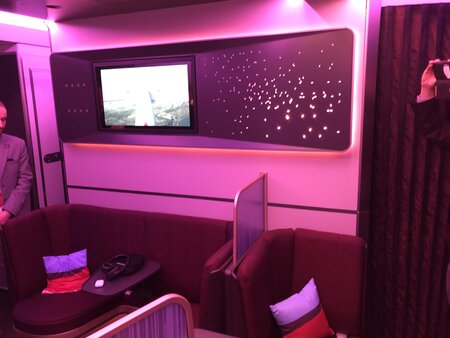 The area is beautifully designed, and particular thought has been put into the lighting which makes this feel more like a high-end hotel than a cabin bulkhead. There is even a gold-plated “chandelier”: 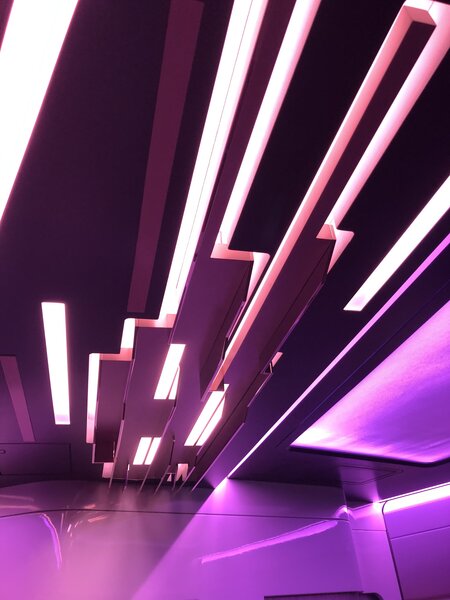 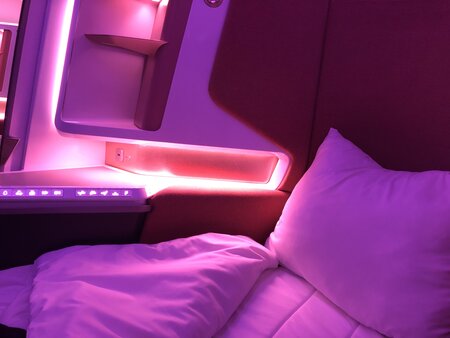 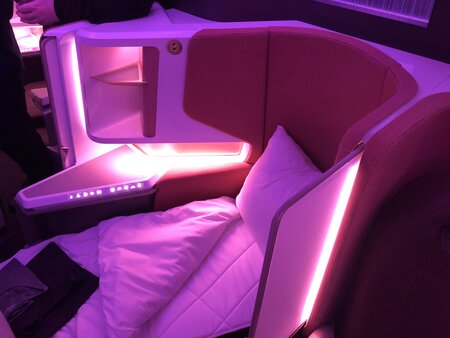 I was very impressed by the textures, colours and lighting that Virgin has introduced into the new cabin. It feels a lot more like a hotel experience than a grey plastic aircraft cabin thanks to this, and is a big upgrade on current generation cabin interiors. 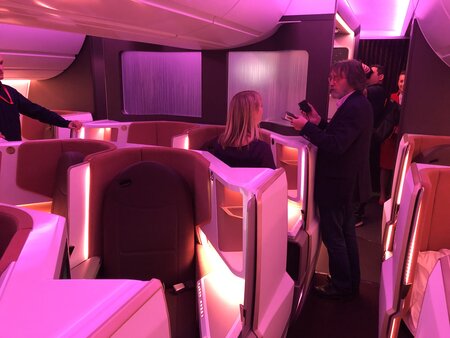 After the cabin tour we were escorted to a room with various Virtual Reality experiences, as well as economy and premium economy production seats.

Textures are also an important part of the economy and premium economy cabins and help to differentiate them from the bland, off-the-shelf seats that many other airlines use.

The economy seat was developed using custom-designed textiles which I think look and feel great. It is based on the Recaro CL3710. I had quick sit down and the seat felt comfortably, though of course the true test will be on a long flight. 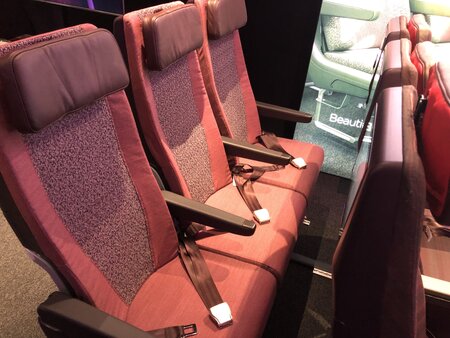 Most economy seats will have 31″ legroom, whilst Economy Delight will have increased space at 34″. The new economy seat also has an 11.6″ entertainment screen which is larger than the current Upper Class screen. 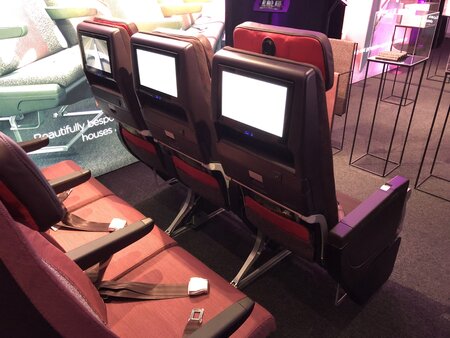 There will be 235 seats in economy, in a 3-3-3 configuration. This is the standard on the A350 and affords economy passengers an inch or more of seat-room versus the Boeing 787 thanks to the A350’s wider cabin.

In premium economy (Virgin Atlantic calls this simply “Premium”), there will be 56 seats in a 2-4-2 configuration. This is comparable to World Traveller Plus on British Airways’ new A350. They chose the Collins Aerospace MiQ seat.

The seats are “inspired by luxury handbags” and made of deep-stitched leather and have a 7″ recline: 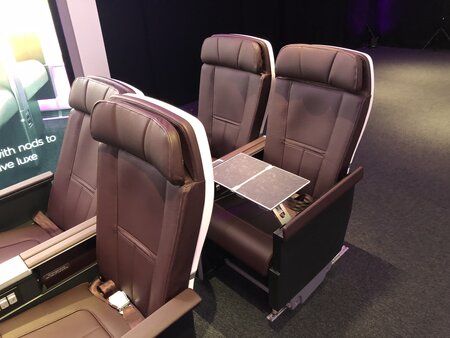 As with other premium economy seats, the tray table folds out from the arm-rests. However, it looks like the seat makers have managed to make the mechanism lighter and smaller when I tried it out. The tray tables are beautifully textured to give a slightly more luxurious feel.

Virgin didn’t tell us the seat pitch for Premium, which makes me think that it could be less than its competitors. However, the seat-back screen will be an impressive 13.3″.

After our tour of the cabin mock-up and VR-model, we were also shown various crew training features such as an A350 emergency exit door demonstrator. They even let us try it out, though there was no inflation of emergency life-raft, only a projection of it occurring! It is amazing how easy it is to operate the emergency lever. A child would be able to do it.

Later in the evening, Shai Weiss, the new CEO of Virgin Atlantic, gave a few words whilst looking like Steve Jobs in jeans and white trainers! 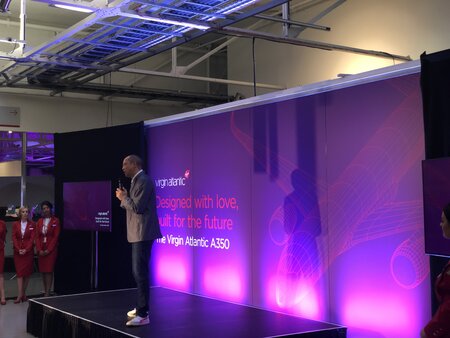 And I spent the rest of the evening enjoining the free food and booze, as well as a wonderful 15-minute oil back massage. Heavenly…

All in all, I am very impressed with Virgin’s new A350 cabin. From a design aesthetic, it seems to beat British Airways’ new Club Suite reveal which seemed a bit grey and drab – although we have only seen it via VR. Of course, with Virgin’s privacy doors in Upper Class only closing half-way, it remains to be seen whether this is enough for privacy or whether it’s more of a gimmick.

Thanks to the Virgin Atlantic team for letting me come along.  We look forward to trying out the new seats later in the year.