If you weren’t lucky enough to get tickets to the ICC Cricket World Cup matches via Emirates Skywards, Heathrow has launched a competition to win a pair of tickets for the England v Australia match at Lord’s on Tuesday 25th June.

You can enter here.

The last time the Cricket World Cup came to the UK was in 1999, so this may be your last opportunity to see England play in the World Cup at home for some time.

The competition is part of Heathrow’s ‘Sport is Great’ campaign, in partnership with the GREAT Britain campaign, which includes installing a giant replica Cricket World Cup trophy outside Terminal 3.  There are also augmented reality experiences in each terminal all summer that allow passengers to place themselves in iconic British sporting venues and loft the winner’s trophy. You can find out more on the heathrow.com/sport page.

After the Cricket World Cup, Heathrow will continue its campaign with promotions linked to Wimbledon and the restart of the Premier League, details of which are still to be revealed. 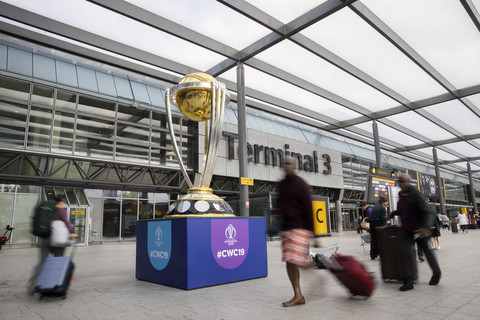 The ICC Cricket World Cup 2019 is expecting at least 100,000 fans from around the world to fly into the country for the Cricket World Cup, contributing to a projected 11.5 million passengers travelling through Heathrow over the Summer period.  You have it easy – if you live in London and you win the tickets, all you need to do is get the tube to St John’s Wood.

You can enter the competition to win tickets to see England play Australia at the Cricket World Cup here.  The closing date is 11th June.

PS.  Heathrow is also running two new promotions to coincide with the ‘Sport is Great’ campaign.  These are:

‘Beer and Burgers’ meal deal, starting at £12.95.  Available at London’s Pride, La Salle, Perfectionists Cafe and Wondertree in T2; The Curator in T3; The Commission and Prince of Wales T4; and Pilots and Gordon Ramsay Plane Food in T5.