Bjorn Kjos, the founder and major shareholder in Norwegian, stood down as CEO yesterday after 17 years.  He is being replaced on an interim basis by the CFO, Geir Karlson.

There is an interesting barb directed at Kjos in the final line of the statement issued:

“Bjorn has played an unprecedented role in Norwegian’s success. His vision of offering affordable fares for all, combined with his enthusiasm and innovating spirit, has revolutionized the way people travel for pleasure and for business, not least between the continents. Bjorn is definitely one of the most influential European entrepreneurs of our time.” 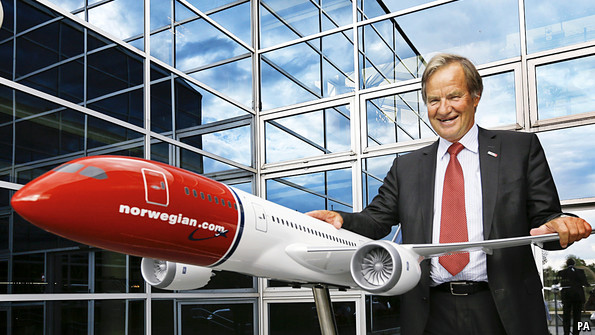 “We have to ensure that Norwegian is well prepared and positioned to handle volatile markets and unexpected events. It is crucial that we continue to deliver on our cost reduction initiatives and that we constantly ensure that we have a route portfolio that yields profit. It is also important that the new CEO develops an organization that embraces continued improvement and operational excellence.”

Norwegian was given a financial lifeline back in January when Norwegian shipping tycoon John Fredriksen (who, fact fans, owns the house with the biggest private garden in London after the Queen – it is just off Kings Road) backed a NOK 3 billion rights issue.

Fredriksen did not do this out of charity, however.  We have seen Norwegian taking a more aggressive approach to its network, including cancelling the London Gatwick to Las Vegas service and asking cabin crew to take unpaid leave.  His hand is also likely to be behind the departure of Kjos.  With the low-yield Winter season getting closer, the airline needs to make sure it is well prepared.