This is part 2 of our review of the Upper Class Suite on the new Virgin Atlantic A350.

Part 1 of our A350 Upper Class Suite review can be found here.

As a reminder, I travelled to New York as the guest of Virgin Atlantic on the official media flight to celebrate the A350 launch.  As well as providing my ticket, Virgin Atlantic paid for two nights accommodation and organised social events for the entire party. 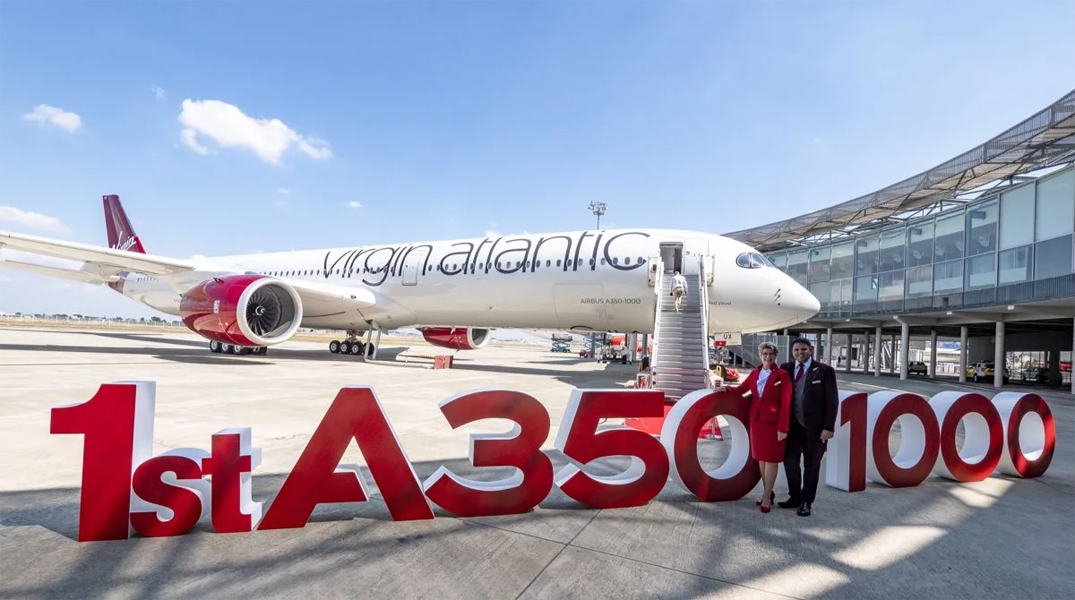 Virgin Atlantic has, very wisely, decided to fit the tail and belly cameras on the A350. The tailcam is especially useful for those sitting in the centre pair with no view outside, since you get a view of the outside world.

Even from a PR perspective the camera is a godsend, allowing passengers to watch what is going on at the gate. On our arrival into JFK it turns out the aircraft was parked on the wrong spot thanks to incorrect markings. We spent about 30 minutes waiting for the ground staff to figure out the problem. At one point there were 17 people milling about under the aircraft.  Being able to watch airport snafus, and even the queue for take off, keeps the passenger informed of their progress and makes flying a less frustrating experience.

Virgin Atlantic already has fleet-wide wi-fi so it is not surprising that these aircraft come fully equipped.

Each seat comes with two USB ports as well as a universal plug socket and aux socket, which is great. These are tucked away under the shelving unit and down the side, next to the privacy door. The ones under the shelves are a little hard to spot but it is an otherwise convenient place. 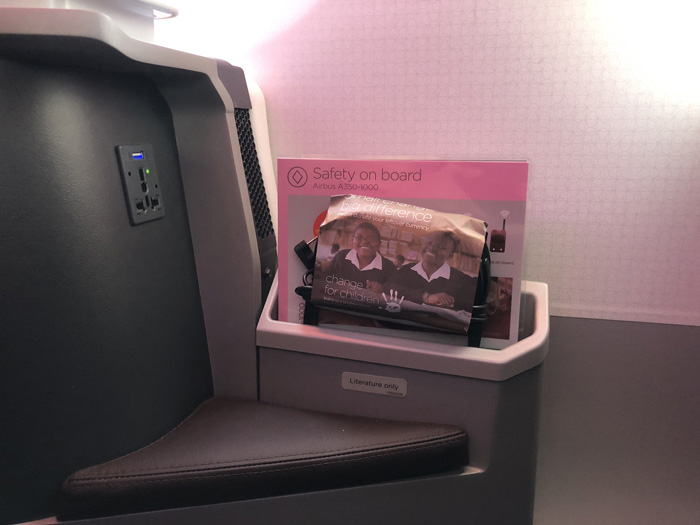 We were given free wi-fi access on our flight to test it out and it worked averagely well by in-flight standards.  I was able to browse social media, emails and web pages without any problems, although I did have to re-connect midway through the flight.

Wi-fi connectivity comes in at £20.99 for the entire flight although there are incremental packages starting at £2.99 for messaging.  This is generally inline with the market, although Qatar Airways charges just $10 for its high speed ‘Super Wi-Fi’ on London-Doha and offers all passengers one hour for free.

To be honest, I don’t understand why the market continues to accept charges for wi-fi, especially in premium cabins.  I know why the airline does not want passengers hogging the bandwidth for gaming or videos, slowing down speeds for those who want to work, but this does not explain why Business Class passengers should pay.  Some airlines consider themselves generous for giving First Class passengers free access.

The loo with a view 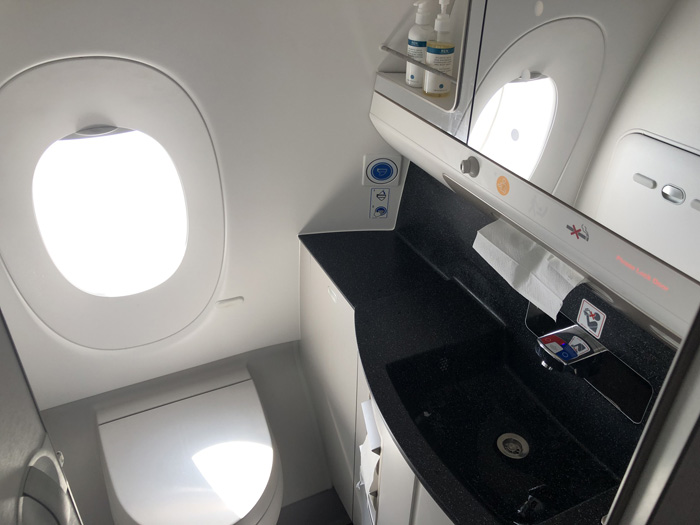 This is the best toilet you’ll find anywhere in the world! The two forward Upper Class bathrooms both have a window overlooking white, fluffy clouds.  (I didn’t check the other bathrooms so this be aircraft-wide.)

Toiletries are supplied by Ren.  There is nothing special about A350 loos in terms of size, unlike on an A380.

The biggest problem the new Upper Class seat is facing is build quality. We were on the first A350 delivered to Virgin, which had been in commercial service to New York for a week. There were already signs of wear and tear.

Safran, the seat manufacturer, has a bit of a reputation for these issues – Cathay Pacific experienced similar problems with its own A350s (see this article) which are also fitted with Safran cabins. The build quality is poor.  The British Airways Club Suite feels far more solid and less plasticky. The privacy screen, in particular, is difficult to operate: it needs a big tug to shift.

Talking to the VP of Customer Experience at Virgin Atlantic, the airline is aware of many of these issues and is working through them as quickly as possible.  According to him, the second and third delivered aircraft have already seen changes and other changes will be retrofitted as soon as possible, including to the tray tables.

What is the best seat?

There are, fundamentally, three variations of the A350 Upper Class Suite across the cabin. If you are sitting next to a window you are facing towards it (always a bonus) with your entertainment screen in front of you. To your side is a small console with two shelves, personal reading light and plug and headphone sockets. The tray table, which folds down and slides across, is next to the aisle. 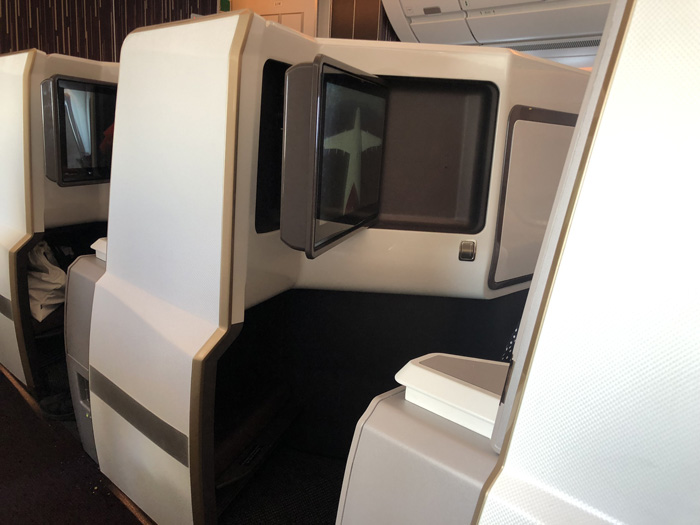 The centre pair of seats is the opposite: you are facing towards the aisle so that your head is in close proximity to your neighbour, although obviously separated by a partition.  This is, I believe, a deliberate decision by Virgin Atlantic due to the high proportion of coupled leisure passengers it carries.  The tray table is on the inside whilst the IFE screen is on the aisle side.

The third variation is only present in row 1, and is clearly the best seat on the entire aircraft. These seats have a slightly wider ottoman/foot-shelf, which creates a larger surface when in lie flat mode. The screens are also engineered to pop out in a different way.

How does the new Virgin seat compare to the British Airways Club Suite?

As it stands, although it is still early days, Club Suite is a superior product. It feels sturdier and the design is slightly more functional, with vastly more storage than the new Upper Class seat which has virtually none.

The BA suite also has an excellent tray table that is flexible and allows for easy egress and exit into the seat.

The seat isn’t everything, of course.  Where Virgin Atlantic does beat British Airways is with the ‘Loft’ lounge, which is a great space, and their excellent use of textiles and colour.  It is hard to deny Virgin Atlantic doesn’t have style, as this new cabin proves.

Despite the issues with seat build quality, Virgin appears to have cut fewer corners than British Airways, choosing to install the tail cam, adjustable air vents and mood lighting.

You also need to factor in other Virgin Atlantic plus points – ‘drive through’ check-in at Heathrow Terminal 3, the excellent Clubhouse lounge, the unfailingly cheerful crew and the food and drink (given that BA’s improved Club World food offering is not yet fleet-wide).  I will touch on the food and drink in a follow-up article tomorrow.

The picture below is a PR shot …. we didn’t get a red carpet welcome. 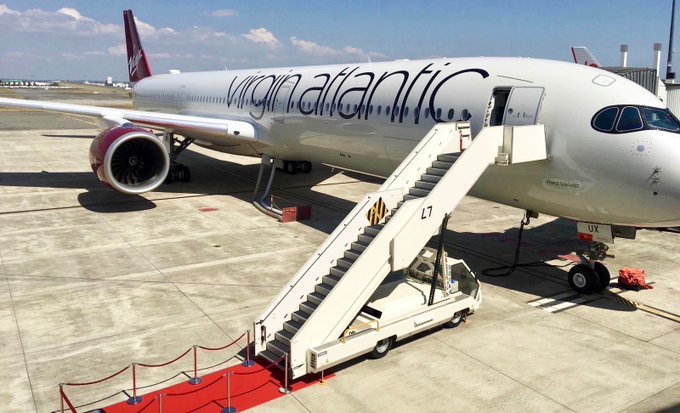 Is this seat the fleet-wide future of Virgin Upper Class?

Virgin Atlantic has been hesitant to comment on whether this exact seat will appear on their existing Boeing 787 fleet or their A330neos, which are coming from 2021. Having now seen and tried the seat, I can understand why.

Whilst it is a clear improvement compared to the existing Upper Class Suite there are still issues. Many of these come down to the Cirrus NG product by Safran.  Whilst it looks flashy, the problems are within the bones of the seat – the lack of storage, inconvenient tray table and privacy screen.

Thankfully, Virgin Atlantic appears to be rectifying these problems as quickly as possible and the A350s should have different tray tables and other modifications by the end of this year. Whilst this is good news, it’s a shame that these issues were not identified sooner.  We look forward to taking another look in a few months when the changes have bedded in.

Looking forward to 2021, I suspect that any future aircraft will most likely be fitted with an evolution of this seat, improving upon the current design.

The other option would be to take the Delta One suite that Anika reviewed here – remember that Delta has a 49% stake in Virgin Atlantic – and modify it to their needs.

Alternatively, the outstanding new ANA seat is apparently also available for licence according to discussions Rob had at the launch last week (see his article here) ….. if Virgin Atlantic chose that particular model it would almost certainly have the best business class hard product of any European airline.

Thank you to the Virgin Atlantic team for inviting us and for their hospitality throughout.