Last year, Abellio Greater Anglia signalled it would be removing First Class from Stansted Express with the arrival of its new rolling stock. It is part of a fleet-wide investment that sees it replacing every single train in its network.

(As someone who lived in Norwich for four years I can only say it is high time. The old trains were very, very old fashioned and I once spent the two hour journey between London and Norwich in a train where the heating had entirely broken.)

The new trains are now arriving – test running started on 25th October – and, bar the scrapping of First Class, represent a clear improvement. You can see a reader photo sent in above.  Stansted Express and the London-Norwich routes will receive the same rolling stock, although Norwich will have a first class carriage. 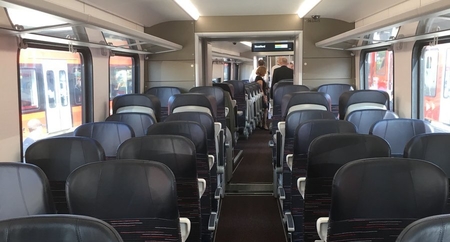 The new Stansted Express trains are longer at 12 walk-through carriages, with low floor boarding, free WiFi, power and USB sockets. It also looks like they have LCD information screens.

Whether or not the trains will be a success will probably depend on two things:  the amount of luggage storage availability as well as the comfort of the seats. Lots of recent train introductions including the new GWR trains have been criticised for seats that are too firm.

If you are a regular Heathrow Express user, remember that new trains are also on the way on that route.

We met with Heathrow Express on Monday and they told us that the new rolling stock will not now be introduced until March.  Whilst the incoming trains are newer and are being refurbished, Heathrow Express admitted that, as they were not built to order, it will be difficult to retain the current high standard of interiors.  First Class is also dropping to 2-1 from 1-1.