Whilst we haven’t covered it, there has been quite a bit of discussion in recent days over easyJet’s plan to leave all middle seats empty when it resumes flying.

The airline believes that its plan will reduce the risk of coronavirus transmission on board.  In reality, I think that easyJet knows that it won’t be selling more than 2/3rd of its seats for quite a while and that this is simply easy publicity to reassure people.

If it does reassure you, it possibly shouldn’t.

We have been here before, with SARS.  In particular, the infamous (if you’re a clinician) case of Air China flight 112 from Hong Kong to Beijing in March 2003.

The flight length was three hours, which is worth bearing in mind as you read on.  Until this flight, it was assumed that mass infection would require a minimum flight time of eight hours and that only passengers within two rows of the source were at risk.

Take a look at this image.  This is taken from Flyertalk.  I can’t find the original source but there is an identical seatmap – just not as easy to follow – in The New England Journal of Medicine here. 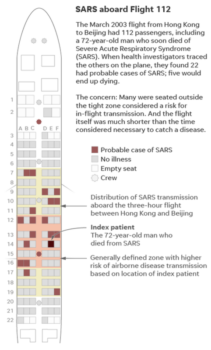 What you can see from this seatmap is that, in Row 14, was a 72 year old man with an active case of SARS.  He later died.

The general view at the time, as shown in the pink area, is that anyone who was sitting within two rows of an infected person – in front or behind – was at risk.

To put this in context, total global deaths from the 2003 SARS outbreak totalled 774.  This single flight accounted for 0.65% of global deaths, excluding the original infected passenger.

All 22 infected people developed symptoms within two to eight days of the flight.  None had any known additional exposure to anyone with SARS.  Whilst some of the infected passengers were travelling together, only one of the 22 cases developed so late (eight days post flight) that it could potentially have been due to secondary infection. 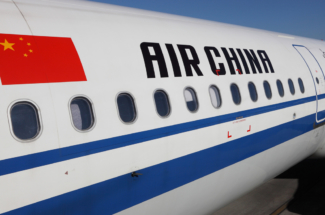 It isn’t that simple of course …..

The New England Journal of Medicine report is worth reading, because it also looks at two other flights taken by known SARS carriers.

One flight, which had four known carriers on it, only led to one additional infection.

A second flight, with a passenger who was not showing symptoms at the time of travel, led to no additional infections.  This flight was carrying 315 passengers on a Boeing 777.  74 passengers were interviewed directly to confirm they had no symptons and enquiries were made into the health of the others.

You should not assume that it is unavoidable that an infected person will infect others whilst travelling.

Here is a relevant paragraph from the report above about Flight 112:

There was no significant difference in risk between persons seated in an aisle seat and those seated in a middle or window seat (6 of 39 [15 percent] vs. 12 of 72 [17 percent]; relative risk, 0.9; 95 percent confidence interval, 0.4 to 2.3). Two of the 20 passengers who became infected (and whose seating assignments are known) were seated within 0.9 m (36 in.) of the index patient.

There are, of course, other potential ways in which passengers could have been infected – during or immediately after boarding, after disembarking at immigration or baggage reclaim, or moving around the aircraft during the flight. 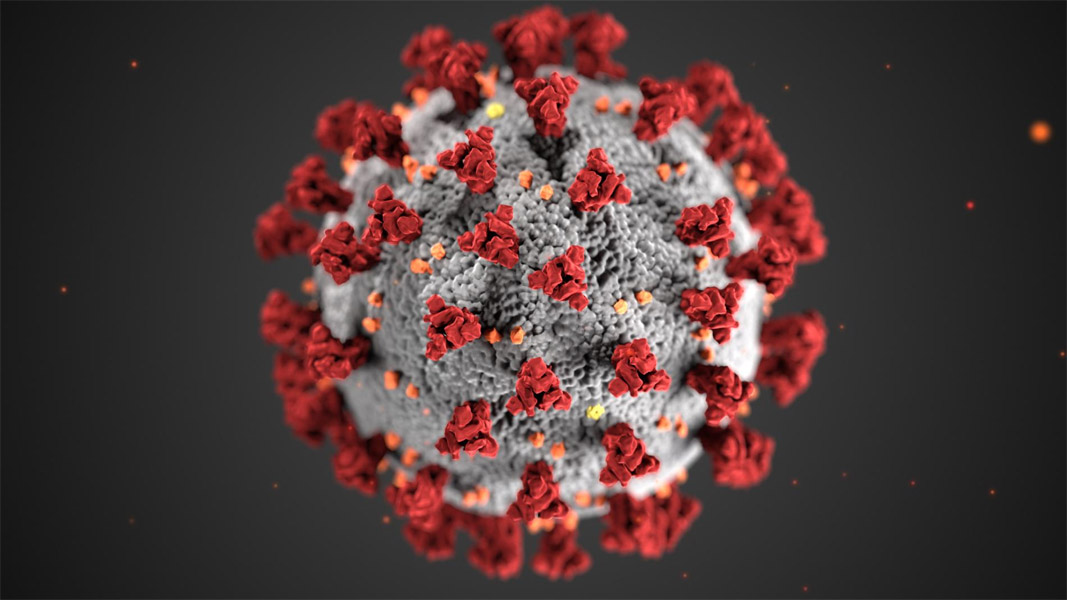 The good news, to some extent, is that Flight 112 has become infamous simply because it is so rare.  The passenger involved is believed to have been a ‘super spreader’ who was substantially more likely than average to infect others.

The New England Journal of Medicine report concludes that:

It seems likely that the overall risk to airline passengers is quite low. As of May 12, 2003, the WHO reported that 35 flights were under investigation because a patient with symptomatic SARS had been on board, but only 4 of these flights were deemed to be associated with possible transmission.  Aircraft ventilation systems are believed to be highly efficient at keeping the air free of pathogens, which they do by exchanging the air in passenger cabins every three to four minutes and passing the circulated air through high-efficiency particulate-arresting (HEPA) filters designed to filter out all particles larger than 0.3 µm by 1 µm.