Today’s ‘My Favourite Hotel’ revew is the Fugitives’ Drift Lodge in KwaZulu-Nata, South Africa, which is reader Paul’s favourite hotel.

Unless there is major news breaking, we hope to run one article in this series per day for the next few weeks.  There will be a deliberate mix of European and worldwide properties, super luxury and mid market, branded and independent.  You can read all of the published reviews to date here. 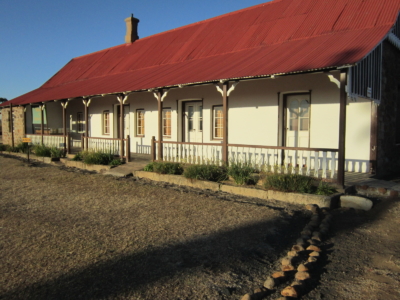 Over the years travel has given us connections with a lot of history – from the cave art at Uluru to the iconic skyline of New York City.  Nothing has been quite as powerful as the immersive experience at Fugitives’ Drift Lodge in The Battlefields Region of KwaZulu-Natal, South Africa.

Owned by the Rattray family, the Lodge serves to honour the memory of the 1879 Zulu War.  Specifically, it focuses on the Zulu victory at Isandlwana and the British Army stand at Rorke’s Drift as researched by the late David Rattray, and kept alive through the use of the Zulu tradition of oral history.

Our road trip from Durban was a form of preparation for what was to come.

Following Audley Travels’ directions, we drove through many miles of majestic landscape, along dusty roads scattered in places with pot holes the size of small craters.  We passed many small settlements seeing women washing clothes in muddy ponds and carrying water on their heads in plastic containers of all shapes and sizes along with crowds of schoolchildren, immaculate in pristine uniforms, white shirts and blouses gleaming in the intense light, returning to their clay and straw rondavel homes. Every now and then, standing slightly aside from the main settlement, a single toilet; a striking touch of modernity.

Having dipped our toes in something entirely new, after five and half hours we finally arrived at Fugitives’ Drift Lodge and instantly became part of the extended family.

Our accommodation was a two bedroom two bathroom cottage close to the main dining area. It was perfect for us, comfortable and homely, although we spent very little time there as we had compressed our visit to two nights with one full day focussed on visits to the main battlefields.

We welcomed the chance to explore the extensive grounds around the lodge by taking a short trek with one of the “gappies” (gap year students) to hear about Lt Coghill and Melville and their attempt to save the Regimental Queen’s Colour after the battle of Isandlwana.

In keeping with the principle stated on the Lodge website that “family is very much at the heart and core of Fugitives’ Drift”, evenings were a communal affair. Drinks and snacks were enjoyed around a fire pit, then dinner at large tables in the dining room surrounded by memorabilia from the Zulu War. 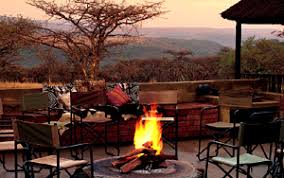 Hosted by members of the Rattray family, conversation was convivial. One night we learned the importance of avoiding the “Dagga Boy” or solitary old buffalo and the next we shared a table with a descendant of the Zulu King Cetshwayo kaMpande, a key figure in the history we had come to hear about.

Throughout our stay food, drinks and level of service were first class. Not only did the team know our names from first introductions, they also remembered our likes and dislikes and took time and trouble to make sure that we were all happy – well fed and well watered. 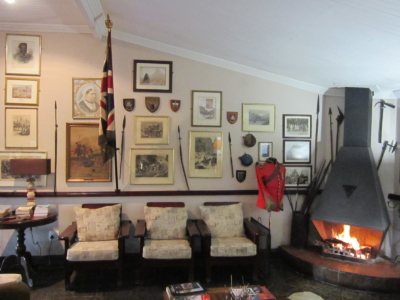 The second day was a unique experience, and one to be treasured. Our itinerary for the day was a visit to the battlefield of Isandlwana in the morning and a visit to Rorke’s Drift in the afternoon, mirroring the events of 22nd January 1879.

When we gathered after breakfast for the trip to Isandlwana we learned that the four of us were the entirety of the party, and that Douglas Rattray would be our guide. On the journey to the battlefield Douglas filled us in on the background to the Zulu war of 1879 so we were well prepared when we arrived at Isandlwana.

Normally chairs are set out on the plain and the stories told there, but as we were a small group Douglas invited us to climb up the hill, for a magnificent view of the battlefield, to listen to the immensely moving stories of battle. 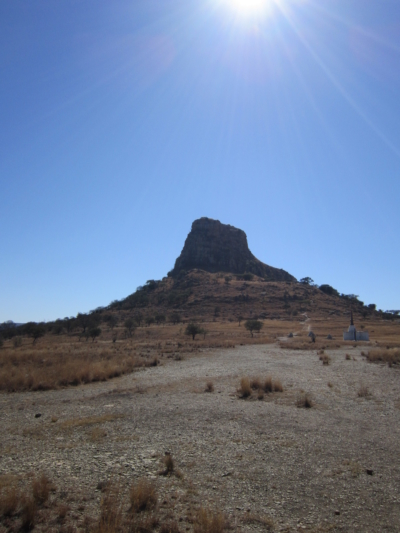 Settling in some way up the hill, we heard about the Zulu victory. Across the plain, white stone cairns mark the last stand of groups of soldiers. And as the tale was told, we were right there with those soldiers on that hot dusty plain facing an enemy with better strategy and tactics.

In our imaginations we heard those Zulu voices and saw the warriors on the ridge surrounding the British encampment. It was terrifying and heart-breaking and utterly unforgettable. 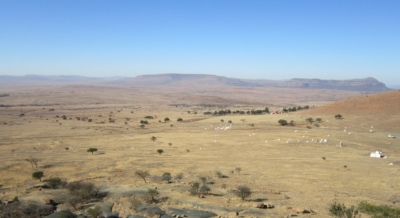 After a buffet lunch back at the Lodge overlooking the Buffalo River Gorge, we moved on to Rorke’s Drift this time with Andrew Rattray as our guide. 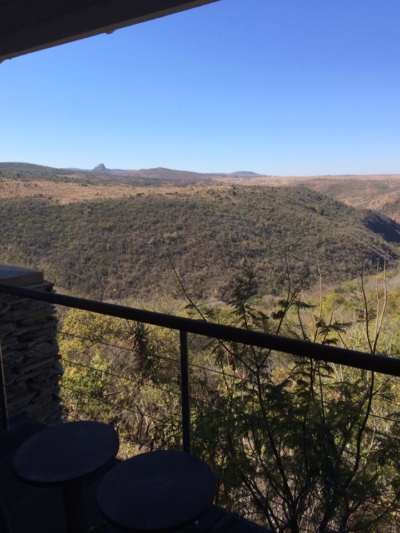 Here we heard of the reality of the engagement portrayed in the film “Zulu”. Once again the words made us become part of the small group of soldiers defending the supply post and hospital, finally down to a space about the size of our rear garden. The final words of the tour were the lines from Binyon’s “For The Fallen”, “At the going down of the sun” recited just as the sun set. Quite a moment. 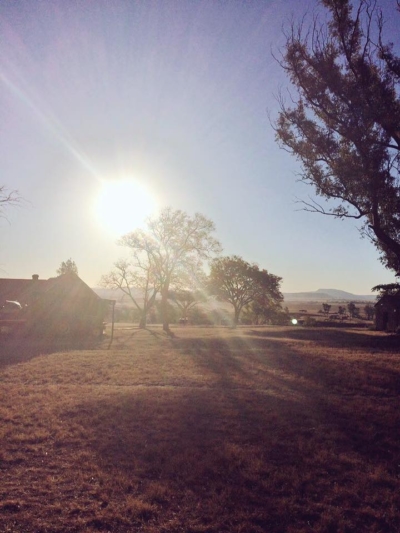 Our South African adventure has now been four years ago, and I believe that the Lodge has continued to enhance its offering with new and refurbished accommodation and additional trips.  The tariffs include accommodation and meals, but exclude drinks and tours and the conservation levy that supports local schools and communities.

A visit to Fugitives Drift provides an opportunity to learn some of the history of the Zulu people and the British soldiers they encountered.  It encourages you to walk in their footsteps and to touch a part of history that would otherwise be left in dusty books on forgotten shelves.

The Fugitives’ Drift Lodge website is here if you want to find out more.