This is my review of Lufthansa’s short haul business class on a flight from Hamburg to Frankurt, and my review of the Lufthansa lounge in Hamburg.

After checking out of the Radisson, I took the 45 second walk back over to the main terminal in Hamburg for my Lufthansa flight to Frankfurt, and then on to New York.

Despite having family in Germany, we always fly with BA if possible, using Reward Flight Saver redemptions. 18,000 Avios plus £40 tax for Club Europe is a modest improvement on Lufthansa’s 45,000 miles (yes, that is not a typo) plus £130 taxes for business class London to Hamburg!

Come June, Lufthansa won’t even fly London to Hamburg as all European LH flights which do not go via Frankfurt or Munich are being transferred to low-cost carrier Germanwings.

It is therefore a couple of years since I last did Lufthansa short haul business class.

This flight (Hamburg to New York, via Frankfurt, one way) was 85,000 Miles & More miles plus £210 or so of taxes. This is not, by a long way, the world’s greatest deal in terms of miles required. However, in terms of the quality of the LH First Class product and the fact that I would have a few hours to spend in the First Class Terminal in Frankfurt, it was worth the splurge.

The first thing to note is that LH lounges, except First Class ones, are dire. Hamburg, to be fair, is not a LH hub, so you should really compare it to BA’s Manchester lounge, for example. However, the grey decor and rows of black chairs do not raise the spirits at 7am on a Sunday. The breakfast selection was very poor, and I was hugely grateful that the Radisson had upgraded me and thrown in a free breakfast. 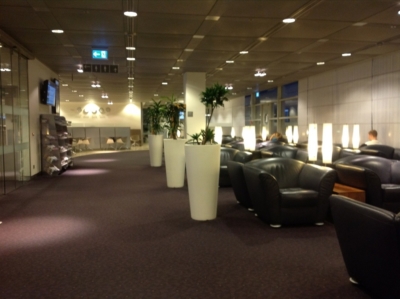 On board the Airbus 319 for the short hop to Frankfurt, things did not improve. Lufthansa uses ‘space saver’ seating, with narrower and harder seats than you normally find. BA also has a few short haul planes like this, but you can normally avoid them. Pitch is not great, and I forced to move from my usual Row 2 position into Row 1 to get some legroom.

The seats in business class are also no wider than those in economy, unlike BA. Again, the grey colour scheme does not improve your mood.

And then breakfast arrived. This is a business class breakfast, remember. I shall say nothing, except that I was again eternally grateful to the Radisson for that upgrade!

I arrived promptly into Frankfurt after a very uneventful 45 minutes. Now, if I had flown from London, the plane would have parked on a remote stand and passengers would have been bussed to the terminal to undergo passport checks. Except for me, who would have had a private car sent out onto the tarmac to whisk me to the sanctuary of the First Class Lounge!

However, as this was a domestic flight, we parked at a gate and I left the plane with no fanfare at all! I should have headed for the First Class Lounge, but as I had a few hours I decide to exit Terminal A and walk over to the dedicated First Class Terminal ….