Virgin Atlantic launched its new Little Red domestic flights at the end of March, serving Manchester, Edinburgh and Aberdeen. These are operated using Heathrow slots which British Airways was forced to give up when it acquired bmi, and are operated by Aer Lingus on behalf of Virgin.

I flew up to Manchester and back, using British Airways outbound and Little Red on the return. I have Silver status with both airlines, so my experiences are based on that. A non-status member may score the two airlines differently.

So, who wins out?

BA sent me an email pre-departure with a direct link to print my boarding pass. I got no email from Virgin and the online check-in process was far more protracted than BA’s. I could not pre-select a seat on Virgin when booking (a BA Silver can do this) and even at check-in I could not have an exit row as I was not a Gold.

(EDIT: a Comment below suggests that I should have been able to pick a seat at booking, even without having Virgin status. I may have been victim of an IT snafu! This would be an improvement on the BA policy which does not allow seat selection without status. However, as I have Silver with both airlines, it would not have impacted my decision to give the point to BA because BA gave me an exit row.)

Terminal 5 is a 5-minute longer journey on the tube and Heathrow Express than Terminal 1 – although this is offset by the longer walk at Terminal 1 along those depressing corridors. (BA and Virgin both use Terminal 3 at Manchester so there is no difference here.) 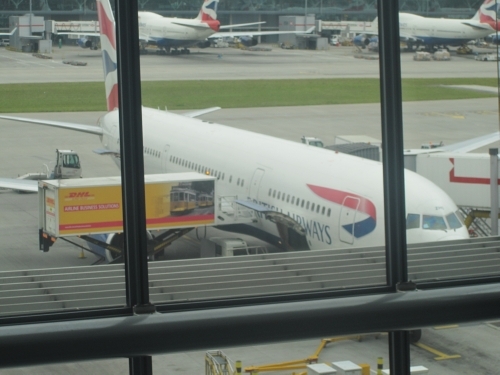 BA operates from the new Terminal 5, Virgin is in Terminal 1 which will be demolished when Terminal 2 opens next year. It took me just 7 minutes to get from the Underground platform and through security to the British Airways lounge in Terminal 5 – and it is a very nice lounge, despite the recent catering issues.

Virgin does not give lounge access in Terminal 1 to Silver card holders. With a Priority Pass, or a Virgin Gold (or if connecting from an Upper Class flight) you can enter the windowless dump that is the Servisair lounge. That said, if you do not have BA status then there is no alternative lounge at all, as Priority Pass does not have a facility in Terminal 5.

A BA Silver gets access to the BA lounge, which is terminally dull. A Virgin Silver has no lounge access.

A Virgin Gold can access the Escape lounge in Terminal 3 which is very nice indeed. You can also access this with a Priority Pass (as I did) – but then a BA flyer could also use this lounge if they had a Priority Pass! I have therefore awarded the point to BA, on the grounds that a Virgin Silver gets no lounge access, even though I really liked the Escape lounge (photo below). 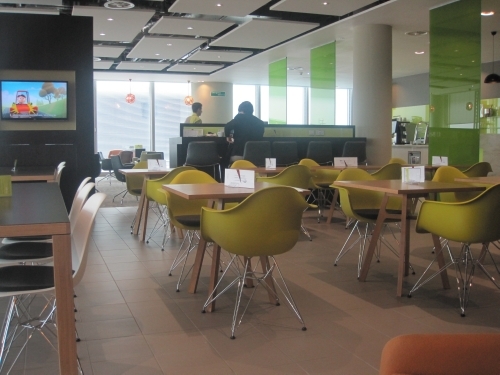 My BA Silver card let me use the Fast Track lane at Heathrow and board immediately with no queueing. At Manchester, my Virgin Silver card got me nothing, but the shockingly light load of 30 passengers meant boarding was easy.

The BA flight to Manchester was 30 minutes late due to a late inbound aircraft. The Virgin flight left exactly on time.

BA allowed me to pre-book an exit row seat. Virgin, despite my Silver status, did not. Laughably, Virgin also blocked off the first 6 rows (36 seats) for Gold and Upper Class passengers – of which there were NONE on my flight. Row 7 was the first occupied row. The Little Red seat pitch in a normal row was a little tight, but the arm rest did come up (unlike BA’s) and the headrest on the ‘space saver’ seating was VERY comfy. Virgin would have won this one if I had got an exit row.

The Little Red planes have been refurbished with new seating and rather snazzy purple ambient lighting. The ‘space saver’ seats are comfy, but with no in-flight magazines. The pathetic passenger loads (30 on my flight) means that you have all the personal space you want! The BA flight was a lot fuller and was in typical condition for a BA A320. 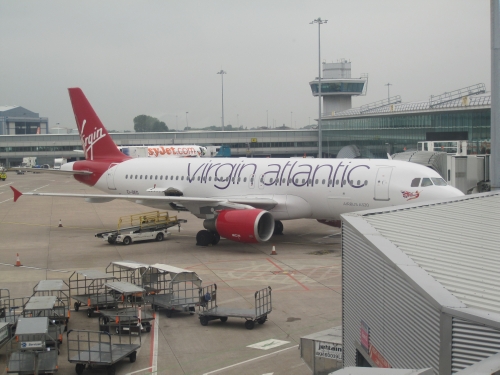 Virgin has cleverly dealt with the issue of Little Red using Terminal 1 and Virgin Atlantic using Terminal 3. A dedicated bus meets each Little Red flight, and you are driven directly from the airbridge across to Terminal 3. With BA, you have an 85% chance of your connecting service operating from Terminal 5, with no need to transfer.

That said, whilst I would avoid Virgin like the plague from Heathrow if you have BA lounge access, the Little Red flight from Manchester was pleasant enough and I would happily use them again. 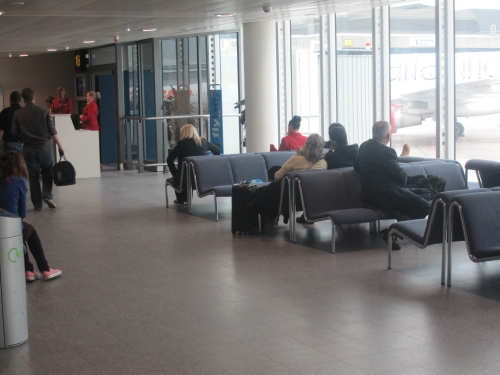 I have heard numerous reports about Virgin’s low loads on these flights (see photo below of the huge crowd I had to wade through in order to board at Manchester ….). However, Virgin is obliged to operate them for (I think) three years or face losing the slots.

Given the $20m price for a pair of Heathrow slots, Virgin has plenty of incentive to see out the three years and then sell the slots or use them for long-haul operations.