According to this survey from US consultancy IdeaWorks, you will have the best chance of getting a seat on airberlin than with any other major global airline! 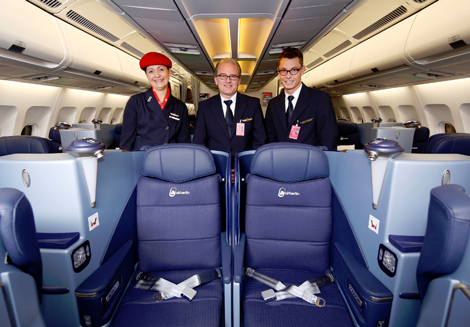 Obviously such surveys should always be taken with a pinch of salt, but the results are interesting nonetheless.

During March 2013, IdeaWorks searched for award availability for a randomly selected flight on 25 different airlines.  An average of 300 searches per airline were carried out – this was a serious bit of research.

Travel dates searched were June to October 2013 (ie 3-7 months ahead) using “top routes” for each carrier.

A seat was counted as “available” if two Economy seats were available on ANY flight on that particular day on the route searched.

The key here is the searching of economy seats – if the survey had looked at two business class seats the results would have been different.

British Airways scored 66% availability.  This is a drop of 13% from 2012.  (Remember, with an average of 300 searches per airline, these results are statistically valid.)

This is presumably down to low short-haul availability.  One upside of BA’s high fuel surcharges on long-haul Avios seats is that seats are not so tricky to get (although in many cases you’d be a mug to redeem for them instead of paying cash).   Short-haul availability is – at least as far as I have seen – fairly tight on some routes except for 2-3 weeks in advance.

Ironically, this is the opposite of what the survey found overall.  On searches for flights up to 2,500 miles, it found availability in 85% of cases globally.

The most astonishing result was for US Airways.  The survey could only find 2 Economy seats on 4% of long-haul (2,500+ miles) routes operated by US Airways, a truly shocking figure.

It is worth noting – as I have written anecdotally on Head for Points before – that Lufthansa / Swiss / Austrian has substantially better availability.  The survey found 2 Economy seats on 82% of the routes they checked, a full 17% higher than British Airways.

My personal view is that British Airways has lost the plot a little when it comes to award availability.

Let’s take my own experience over Easter.  Three weeks before Easter, we bought 4 Club World return tickets to Dubai in a BA sale, for school holiday days, for £1,200 each.  When we used these tickets, we earned back a substantial amount of Avios points and OnBusiness points for future use too.

An Avios reward flight on the same route would have been 80,000 Avios points + £500 of surcharges, with no points earned back.

If they were so desperate to fill the seats that they were selling them at £1,200 each, they should have put them up for Avios rewards.  (BA would have got in £500 of cash in surcharges, got 80,000 Avios off its liabilities and saved itself from paying out more Avios and OnBusiness points on a cash ticket.)

And yet, reward flights to Dubai over Easter in Club World remained unbelievably tricky to get, no doubt frustrating many loyal BA flyers in the process.

We also now have the weird situation of Avios seat being opened up at the last minute, allowing people who have (expensive) cancellable tickets to cancel them and rebook a reward seat instead!  Again, it makes little sense – there are few people who are looking to book a holiday on Avios with 3-4 days notice.

Even the ‘guaranteed availability’ for BAEC Gold cardholders is a bit of a joke, requiring double Avios points and refusing to accept American Express 2-4-1 vouchers.  Would any Gold member really pay 640,000 Avios plus £2,000 of tax to take four people to Dubai in Club World?

Some change needs to come, because the current system isn’t really working well for anyone.