It has been publicised for a while that IHG Rewards Club will be offering free internet to all of its members – even those at the basic level who have just signed up – from January.  (Gold and Platinum members already receive free internet.)

Ric Garrido of Loyalty Traveler recently interviewed Don Berg, who heads up IHG Rewards Club.  The key thing which slipped out during this conversation is this:

IHG will offer free internet to all IHG Rewards Club members in all of its hotels from January – even if they are not a guest. 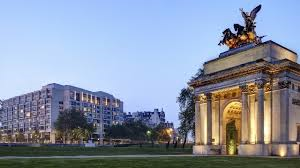 This is a pretty radical departure, albeit something that Radisson tried a few years ago for Elite members (and then dropped).  Fundamentally, as of January 1st, you have a choice.  You can either take your laptop down to Starbucks, or you can take it to the lobby of your nearest Holiday Inn, Holiday Inn Express, Crowne Plaza, Indigo or InterContinental hotel!

(As the InterContinental Park Lane – pictured above – is two tube stops from me, this could work out nicely!)

There is a lot of other interesting stuff in the interview.  Importantly, it seems that IHG’s IT is powerless to stop people registering for multiple promotional codes, and that IHG is happy for them to continue to be stacked (or, alternatively, finds it cheaper than the IT cost of fixing it).  I signed up a friend recently and he got 35,000 points on his first stay ….

On a separate note ….

I have predicted a few times on Head for Points that IHG’s new way of counting points for status (ie no longer counting bonus points) would leave to a massive drop in Platinum members next year.

I assumed that this was the plan ….. slash the numbers and then improve the benefits.  However, no improved benefits have been forthcoming – Platinum will now be very hard to earn and still won’t get you much!

Someone at IHG is now panicking a little.  A lot of Platinum members who will not requalify have been targeted by IHG, offering them another year of Platinum if they do three stays between now and the year end.  One person I know had only 9 nights this year, well short of the 50 nights required, and still got it.

I still feel that this is very unfair on non-UK and non-US IHG members.  You can, after all, get Platinum for free in the UK by paying £99 for the IHG Rewards Club Black Visa card.  Outside the UK, you now need to spend a crazy $6,000 in IHG hotels …..