Of all the stories I wrote last year, the one which you would most expect to be an April Fool is probably this one – that Emirates and easyJet have formed a partnership to let you redeem Skywards miles on easyJet flights.

Yet, oddly, it is true!  If you can’t find a First Class Suite from London to Dubai available, you can redeem for an economy easyJet ticket from London to Ibiza instead!

Even more oddly, Etihad has felt it must retaliate!

The airline has formed a partnership with Flybe to allow you to redeem Etihad Guest miles on Flybe flights.  Details are here. 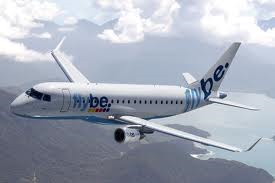 This is wrong in SO many ways I find it hard to describe!

For a start, taxes are not included.  Flybe has a VERY, ahem, ‘flexible’ policy on taxes.  The underlying taxes number is huge.  So huge, in fact, that their cash tickets often have a negative base price in order to bring down the end price to the consumer to an acceptable level.

(Flybe’s own rewards scheme actually contains this warning about redeeming your points:  “Discounted web fares may occasionally be available at a lower cost (including taxes & charges) than equivalent reward flights.”)

We then move on to the miles required.

The miles needed varies depending on the cheapest ticket currently for sale in the Flybe system for that flight.  For a UK domestic flight, this can be as much as 22,300 miles.  Plus the taxes – which, as I mentioned above, can be higher than a cash ticket anyway.

For comparison, I flew someone FIRST CLASS on Etihad from Abu Dhabi to Istanbul recently.  That cost me, IIRC, 32,000 miles plus £13 tax, one-way.

I suppose this may be of some use to some people – especially for short notice flights (albeit that Flybe needs 14 days notice for a redemption) where the cash equivalent is huge.

However, for most people, a more effective route of redeeming on Flybe would be to cash in their Etihad Guest points for cash, via PointsPay and use that money to buy a Flybe ticket.

You get 0.41p per Etihad Guest mile with points pay.  Factoring in the fact that Flybe redemption seats come with added taxes, using PointsPay to ‘buy’ a normal Flybe ticket is probably a better deal.

More on the Flybe partnership can be found here.  If you want to take a look at the Flybe route network you can find it here.