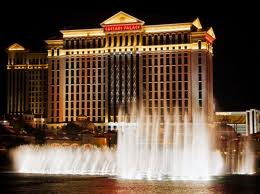 If you stay at any of the above properties, you will earn 2 Starwood points per $1 charged to your room.  You will also earn ‘nights’ towards earning Starwood elite status (capped at a maximum of 10 per year from Caesars properties, and they do not count towards SPG lifetime status) although oddly it will not count as a ‘stay’ if you earn status on the basis of stays.

That’s it, basically.  Starwood elite benefits are not recognised by Caesars, so you won’t receive late check-out or an upgrade.

You can ‘double dip’ with Total Rewards, the Caesars loyalty scheme, and earn credit in both schemes for your stay.  However, for a UK resident making a one-off trip to Las Vegas, I doubt you would want to bother with that.

As Starwood elite benefits are not recognised, there is no reason to purposely stay at a Caesars property in Vegas – unless you need the extra nights to requalify for SPG status.  That said, if you have picked one of these properties anyway then you might as well take the points.

It is also possible to redeem SPG points for Caesars rooms.  The redemption rates are very poor, though, and it would not be a good use of your Starwood points.  Loyalty Traveler has run through the numbers on his blog.