As I explained on Monday, I was flying out to Amsterdam for the night to test out the Hotel Tonight ‘last minute booking’ app.  I had earned some credit from signing up and from referring a few HFP readers and I wanted to try it out.

I did have a kind of plan.  I had been watching Hotel Tonight for a couple of weeks and I knew roughly what hotels they featured in Amsterdam.  I had also picked my preferred target for the night.  I guessed that trouble was brewing, though, when I checked cash prices last Friday and saw the top five-star hotels coming in at £600 for Monday night!

HotelTonight loads its offers at ‘9am local time’.  I assumed this was ‘hotel time’ so at 8am, on the train to Gatwick, I fired up my phone – to be told to come back in an hour.  It seems that ‘9am local time’ means 9am in the country you are in – this is a bit odd, frankly, as anyone living in France, Germany, Netherlands etc gets a 1 hour head start on booking Amsterdam hotels. 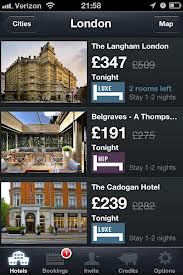 At 9.15 I was in the British Airways lounge at Gatwick.  Before I go on, let me explain what I needed.  I am a family guy in my 40’s.  My plans for a night in Amsterdam involved getting a meal in my hotel, watching TV and working on the blog in a comfortable room.  I was not after a ‘crash pad’ which I would hardly see after a night of hard drinking and other stuff ….

These were the offers at 9.15am London time:

‘Vondel’ – ‘Hip’ quality rating, 15 square metre room – rejected on room size and TripAdvisor reviews.  They warned that some rooms are in the basement and have massive noise issues from the hotel kitchens etc.  I was pretty sure this is where my room would have been.

I rejected the above pretty quickly.  This was not necessarily the fault of HotelTonight – on a busy day, there is less distressed inventory to be had and it will still fetch a good price.  In some ways HotelTonight is more useful on very busy nights as you know the hotels they feature will be available – if you’re willing to pay.  The hotel I wanted to book for the night was not there at all.

Half an hour later, The College Hotel appeared.  This was better – 29 sq m rooms and £155.  A quick look at TripAdvisor found many complaints about major falls in service levels and, more importantly since I wanted to work, that the rooms were very, very dark.

I could have gone with the College and, if it had been there at 9.15, I probably would have.  In the 30 minutes before that hotel popped up, though, I had started looking at other options using my hotel loyalty points.   Some of these options looked a lot better.

Starwood has ‘last room availability’ so I tried them first.  The Pulitzer was sold out so that was off the list.  Perhaps luckily as I have had bad experiences there twice before.

Hilton had the brand new Waldorf-Astoria.  At 80,000 points this seemed like a serious hit even with a cash rate of €595 – and at 28 sq m (before any Gold upgrade) the room was smaller than the College.  The standard Hilton was not a contender at 70,000 points (€299 cash).  The Doubletree by the station would have done at 50,000 points if I was desperate.

I moved on to IHG.  I finally got lucky.  The InterContinental Amstel, one of the finest hotels in the chain, was available.  There is a picture below.  For cash, they wanted €729 for a 35 sq m room.  For points, it was only 40,000 – only 5,000 points more than you would pay for some Holiday Inn Express hotels in London! 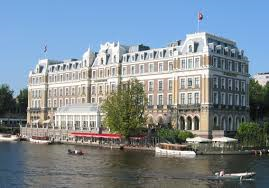 I also have InterContinental Ambassador status, which meant (as long as they honoured my benefits on a reward stay) 4pm check-out and an upgrade.  I stayed at the Amstel about eight years ago so I knew the location was good for the Rijksmuseum – the only bit of sightseeing I definitely wanted to do.

HotelTonight got the push.  I still have my credit and I hope to use it over the next few months.  I booked myself into the Amstel – review to follow – and then also decided to give the pretty poor BA First Class lounge the elbow as well.  I wandered downstairs to No 1 Traveller – more on that tomorrow …..

(PS.  There is an ironic postscript to this story.  At 6pm, in the Amstel, I took another look at HotelTonight.  The hotel I was hoping to get – Banks Mansion – was now available.  It wasn’t even at an inflated price, just the usual £170.  If they had loaded this at 9am then my night would have been very different.)