This article is my review of the new Hilton St George’s Park – better known as the National Football Centre.

Two weeks ago, immediately after my children finished school, we headed off to Thomas (the Tank Engine) Land as a treat for my three year old.

Thomas Land is based at Drayton Manor theme park near Tamworth (which is near Birmingham).  Drayton Manor is ‘Alton Towers-lite’ – there are a number of high-end rides for teenagers and adults but the site is surprisingly small.  You can walk from end to end in 10 minutes. 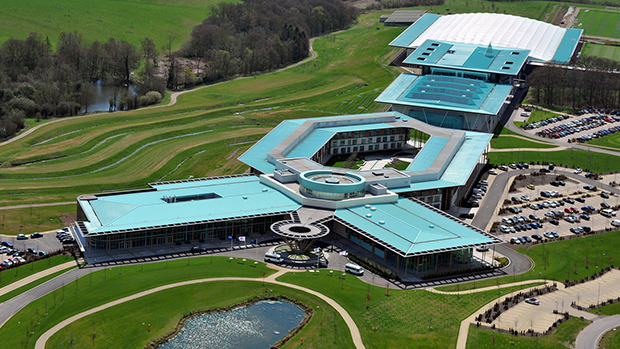 Because we would be coming up from London, we decided to make a long weekend of it.

The Football Association spent £100m developing St George’s Park.  Because the hotel is an integrated part of the complex – visiting players need somewhere to stay, and as you read this Messi and his Barcelona colleagues will be training there – it is not run on a commercial basis.

You could not build a hotel this impressive (in Burton upon Trent) and charge the modest prices that Hilton asks if you were trying to make a sensible return on your investment.  It was, by far, the best Hilton-branded hotel I have ever visited in the UK. 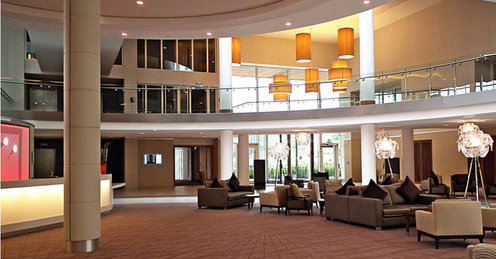 This is a BIG hotel in every sense.  Some of the photographs in this review are library pictures because my iPhone camera couldn’t produce anything decent given the scale of the rooms and the lighting issues that come from huge amounts of glass!  I also forgot to take photographs of our room before our kids had trashed it …..!

Above is the Hilton lobby.  You can see what I mean by ‘big’.  This is the suite we booked: 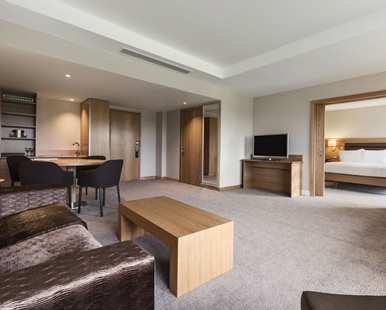 The sofa became a sofa bed for our 6-year old and we had an additional rollaway bed for our 3-year old.  It was well equipped – there is a big working area to the right out of shot, two TV’s and two bathrooms (and two sinks in the main bathroom). 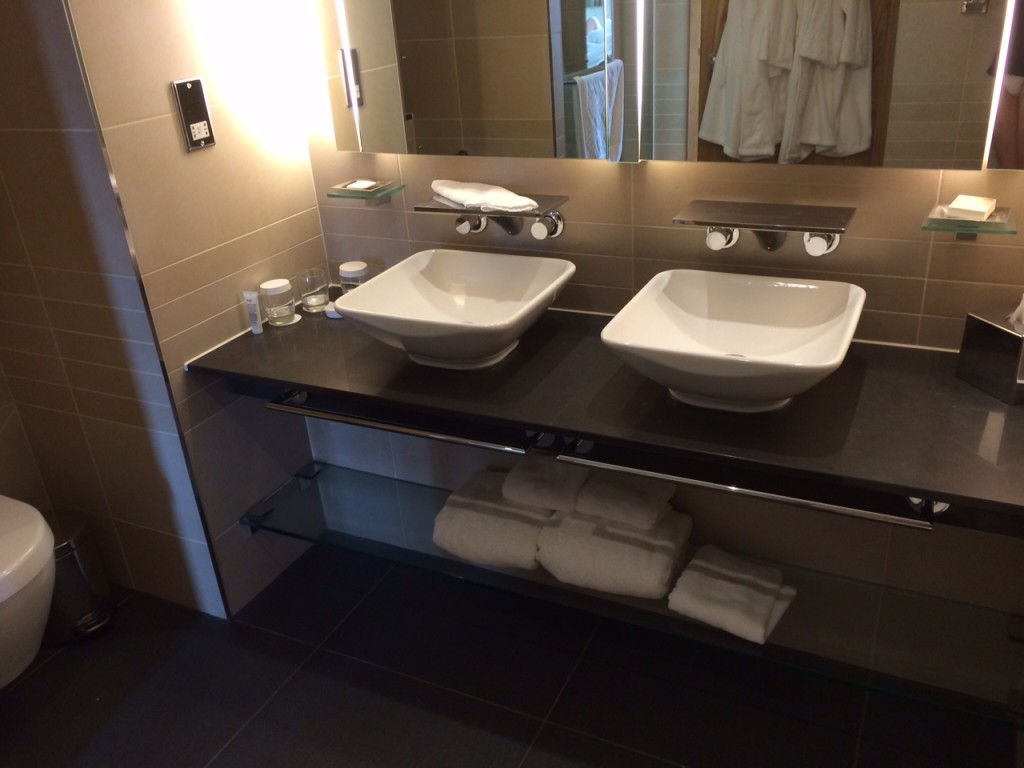 Our suite looked out onto open countryside (the top left part of the aerial photograph at the top): 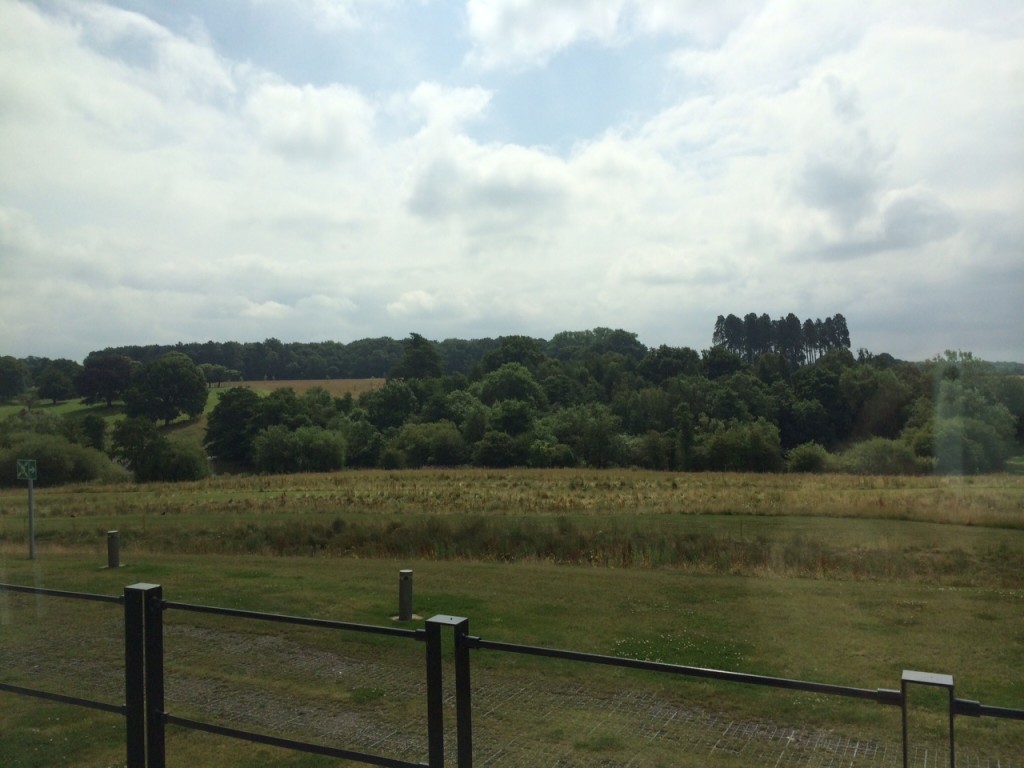 Rooms on the other side of the corridors overlook the central courtyard.  You should be aware, though, that whilst this hotel is IN the countryside, it is NOT a countryside hotel.  If you are expecting country pursuits, you’re in the wrong place.  I’m not even sure how much of the surrounding countryside is accessible.

This is what passes for in-room artwork! 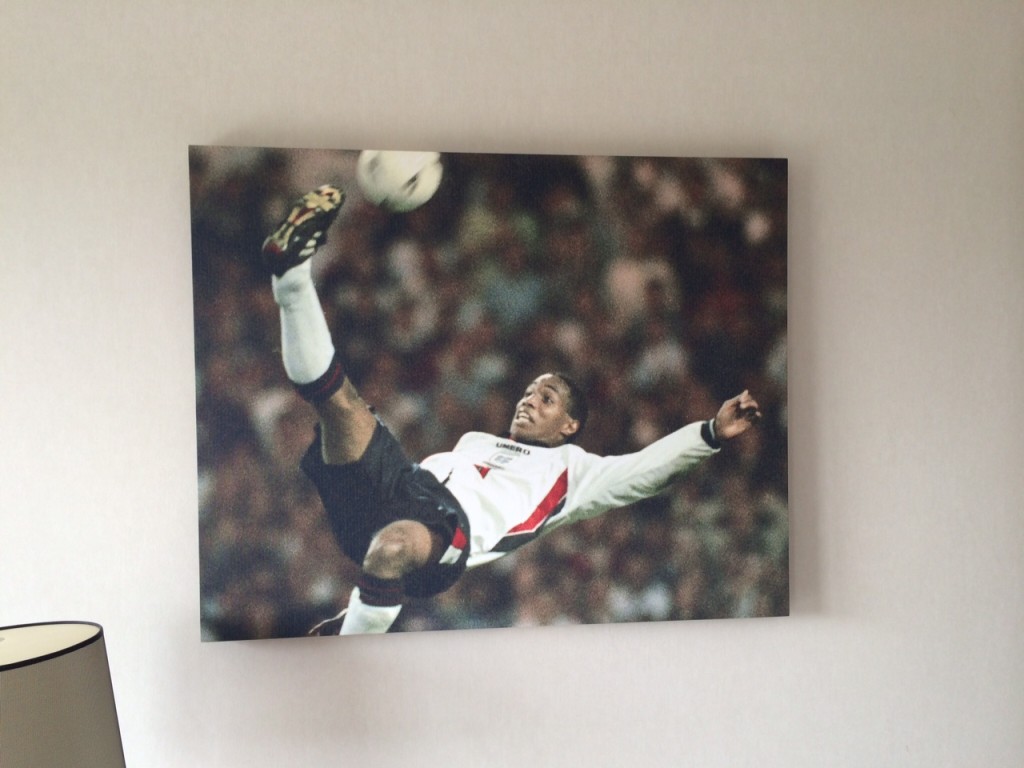 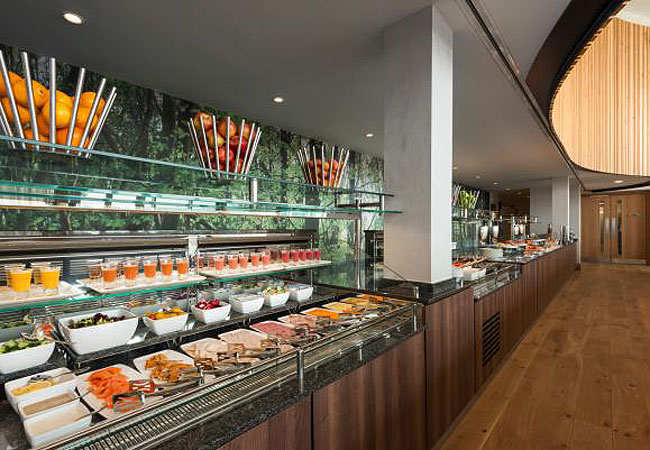 This is just part of the breakfast buffet at Hilton St George’s Park.  Because the hotel is being permanently used for Football Association events, you have an impressively healthy spread.  My wife – brought up on a German breakfast regime far healthier than the traditional British one – thought it was the best breakfast variety she had ever seen in a UK hotel.  This includes places such as Four Seasons Hampshire!

What you don’t see from this picture is the glass curtain wall that runs the entire length of the breakfast room (restaurant in the evening) and which offers huge amounts of light and views over the countryside. 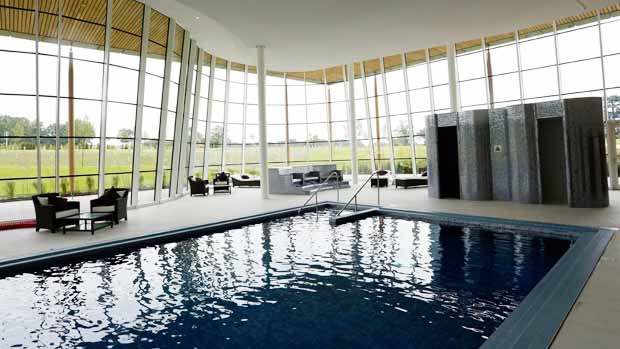 This is the hotel pool.  Whilst there is no childrens pool, it not too deep at 120 cm.  There is also, out of shot here, a jacuzzi which is part of the main pool – being at normal water temperature, it is OK for kids to paddle in if no-one is using it.  Children are allowed in the pool between 9am and 7pm at weekends and between 9-12 and 2-7 during the week.

It also had something that I have never seen before in a hotel.  In the photo above, to the right of the central pillar, are a series of jacuzzi foot baths!  There are three of them in a row, each has one cold bath for the right foot and one hot bath for the left foot.

The two showers you see above are also not standard showers. The one of the right is actually full of ice should you want an ice ‘rub down’.  The left hand side is a traditional shower, albeit one that plays birdsong as you shower.

The hotel also an executive lounge, not pictured.  This is only open for two hours each day, between 6pm and 8pm.  The positive news is that there is a decent selection of snacks laid out and a lot of alcohol – on the Thursday night they had left out 11 bottles of wine.  We went there one evening on a day when we had a large lunch and there was enough to keep everyone happy.

In terms of pricing, we paid £167 per night for our suite.  This included lounge access.  Because the hotel does not serve breakfast in the lounge, you are also entitled to free breakfast in the restaurant.  (As Hilton Gold, I would have got breakfast for at least two of us for free anyway.)

The total bill was just over £500 for three night.  I got £100 cashback from American Express via their current ‘£50 cashback for £250 Hilton spend’ promotion by splitting the bill over two cards.  I also get 25,000 Hilton HHonors points, worth about £80.

If you want something cheaper, there is also a Hampton By Hilton at St George’s Park but I didn’t visit that.

Apart from Drayton Manor / Thomas Land, the hotel is VERY close to the National Forest Adventure Farm (literally five minutes drive) which we visited on our first afternoon.  The National Memorial Arboretum is also within 15 minutes drive – it is free to visit and has a decent self-service restaurant if you want to pop in for a meal and a stroll..  Lichfield, an attractive medieval city with an impressive cathedral, is also close.