British Airways sent out an announcement recently regarding the pricing of ‘extra seats’, often known as ‘comfort seats’.

The archetypal user of an ‘extra seat’ is a musician with a priceless cello or violin, a bride-to-be with her wedding dress (see photo below!), an ex-skier with a foot in plaster or a critically obese individual. 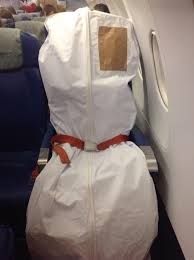 Until last month, you could book an ‘extra seat’ for the ex-tax price of a standard cash seat.

Because of BA’s crazy ‘taxes and charges’ this would often be as little as £5 on a short-haul flight.

You may be wondering why, if you could pay so little to book an empty seat next to you, more people did not do so.  Apart from the fact that British Airways keeps them low key, the airline is woefully poor at administering them.

You can only book an ‘extra seat’ by telephone.  Once done – and you need to find an agent who can do it, which is not always easy – you cannot relax.  Because of the way they are treated in the system, you remain reliant on the ground staff at the airport to block out your additional seat properly and to not move a passenger into it.

As of a couple of weeks ago, the minimum price is now £40 return for short-haul flights and £300 return for long-haul flights.   The price will be higher if the ex-taxes and surcharges price of the 2nd seat is greater than £40 / £300.

There is one more downside.  In long-haul economy BA can no longer guarantee that your seat will have armrests which fully lift (it is not clear which aircraft this refers to) which means that ‘people of size’ are wasting their money buying an additional middle seat.  British Airways put out a specific release last week addressing this as it is clearly causing some embarrassment at airports.

You can also no longer buy a spare seat for a double bass if travelling on a short-haul flight, as they will no longer fit due to the ‘enhanced’ legroom in the refurbished planes!