This is Part 2 of my review of British Airways A380 First Class.

Yesterday I ran ahead of myself by showcasing the tasting menu that I had on the British Airways A380 recently in First Class flying out to Los Angeles.  Today I will show you how the cabin looks.

All British Airways A380 flights leave from concourse C in Terminal 5.  As there is no lounge at 5C, you need to stay in the main terminal or use the lounge at 5B if you want to get off the train half-way.

You can still claim £15 of free Starbucks products if flying from Terminal 5C as compensation for the lack of a lounge but, at 9am, I couldn’t be bothered.  The idea of carrying a Starbucks mug or two all the way to Las Vegas and back did not appeal.  In retrospect, I should have got a small bottle of champagne (yes, Starbucks sells champagne in Terminal 5C) and drunk it in the poor Virgin lounge in Los Angeles.

First Class is situated downstairs.  I would say ‘in the nose’ but because the plane does not visibly taper much in at the front – unlike First Class on a 747 – that does not seem like the right phrase.  Club World and World Traveller seating is split between the lower and upper decks whilst World Traveller Plus is only to be found upstairs. 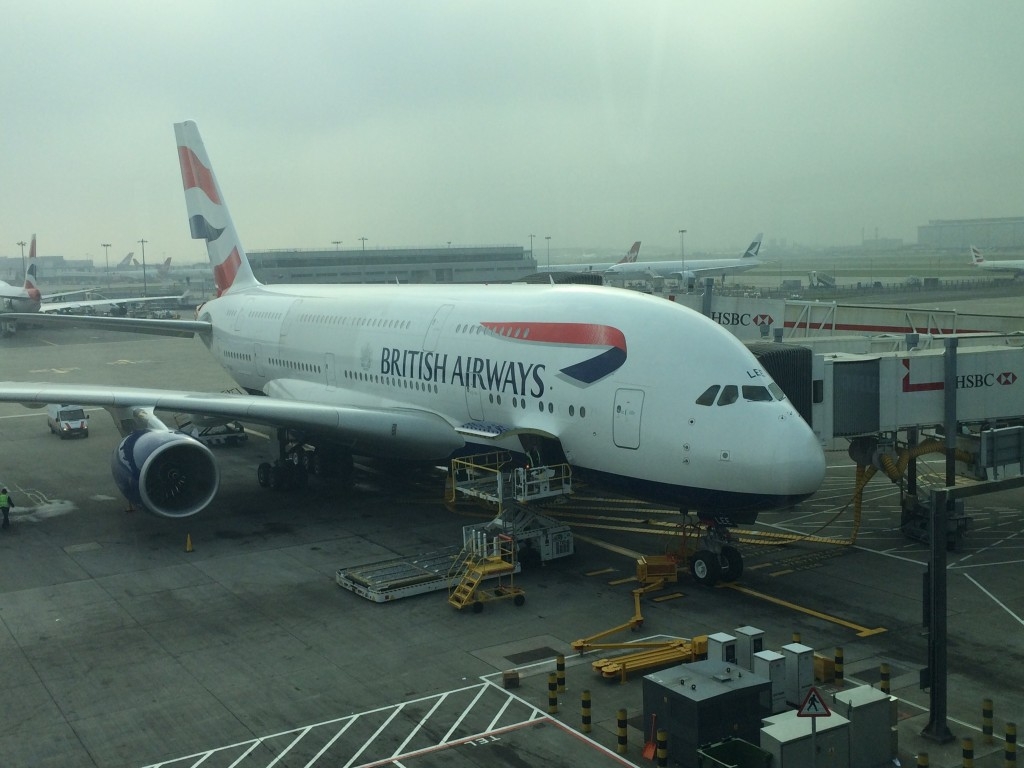 The first thing I noticed from Seat 2A were the stairs leading up.  Like Emirates, neither passengers nor crew (apart from the Cabin Services Director) are allowed to use the stairs – apparently crew cannot use them because the noise of footsteps disturbs First Class passengers.  Fundamentally, the front stairs are redundant and could be removed. 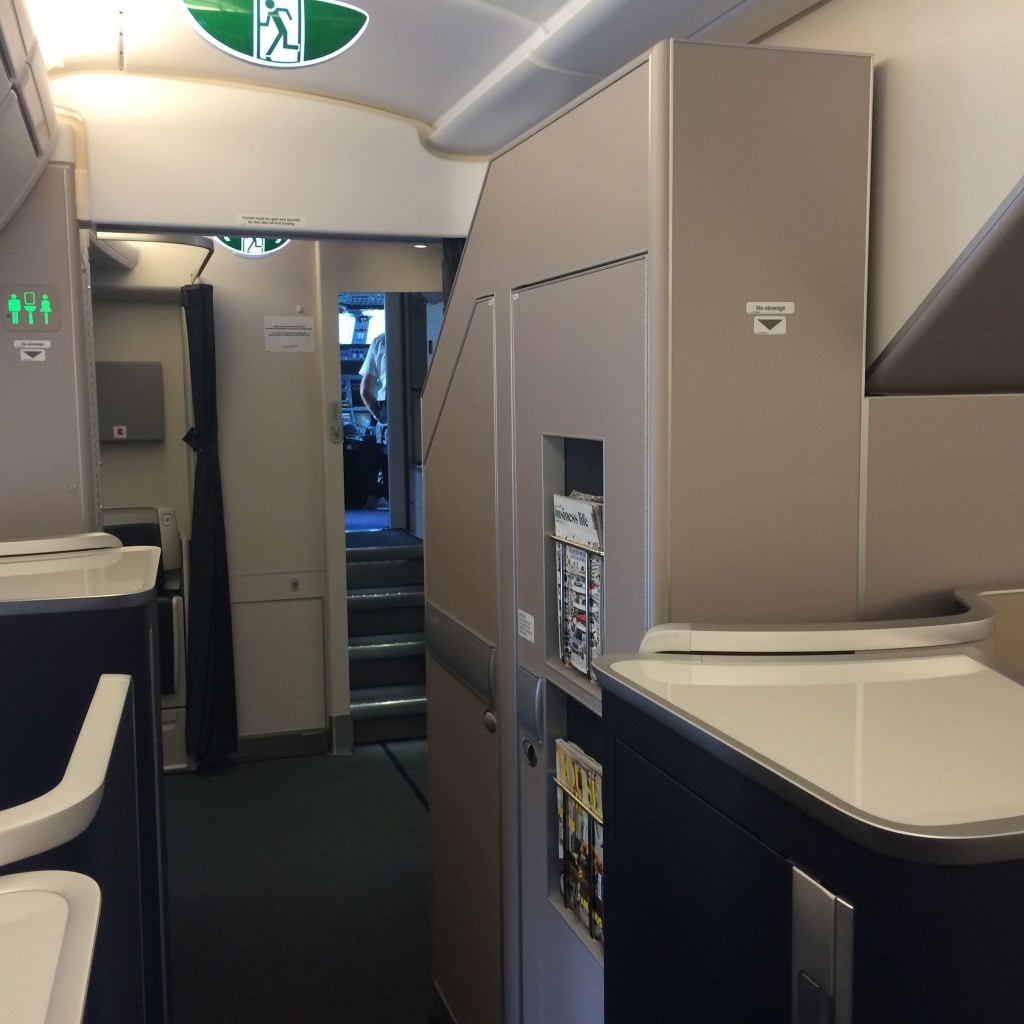 This does leave you feeling a little hemmed in if you are sitting beside the staircase.  Similarly, if you are sitting in the middle rows, you will be looking at the back of the stairs rather than – on a 747 – having a clear view down towards the nose.

You can get a feel for the width of the cabin here: 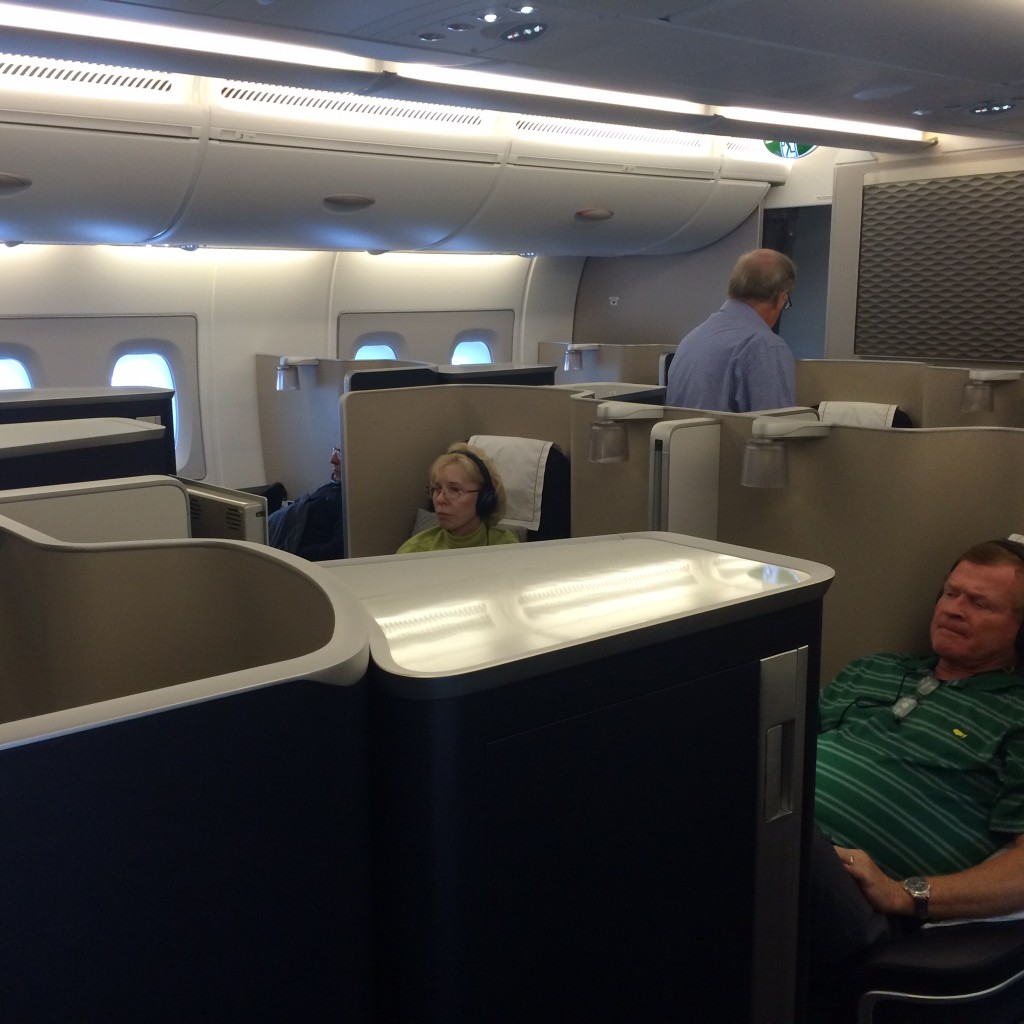 The seats are visibly bigger than those on a Boeing 747 or Boeing 777.  This did bring its own problems, though, as I will explain.

I have become quite sanguine about airline toiletry bags these days – although the 30cl bottle of Ferragamo EDT I received from Singapore Airlines over the Summer is coming in handy at the moment.  Whilst the current British Airways First bag will hardly become a collectors item, and lacks the charm of the previous Anya Hindmarch bags: 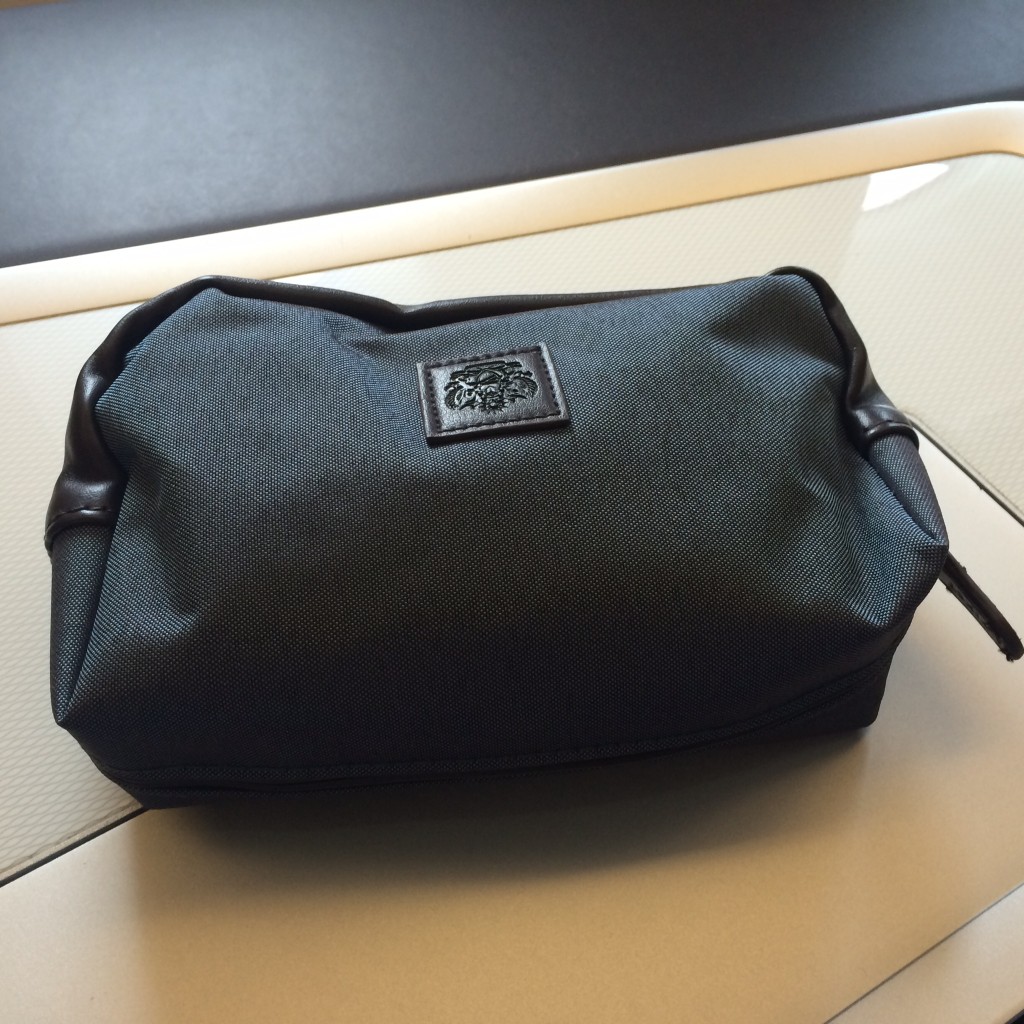 …. it WAS pretty good.  The bag does look classy when you see it in the flesh and the Refinery products represent a good choice of ‘modern’ brand with a design ethos that sits with the BA First ‘look’.  More importantly, the range of products inside did appear to be broader than your typical toiletry bag.

I also got my pair of British Airways pyjamas.  There has been a long running joke on Flyertalk about how badly these fit, but I honestly didn’t have any problems with mine.  I didn’t wear them on the plane (it was a daytime flight, leaving London at 9.40am) but I took them with me and wore them in the Four Seasons! 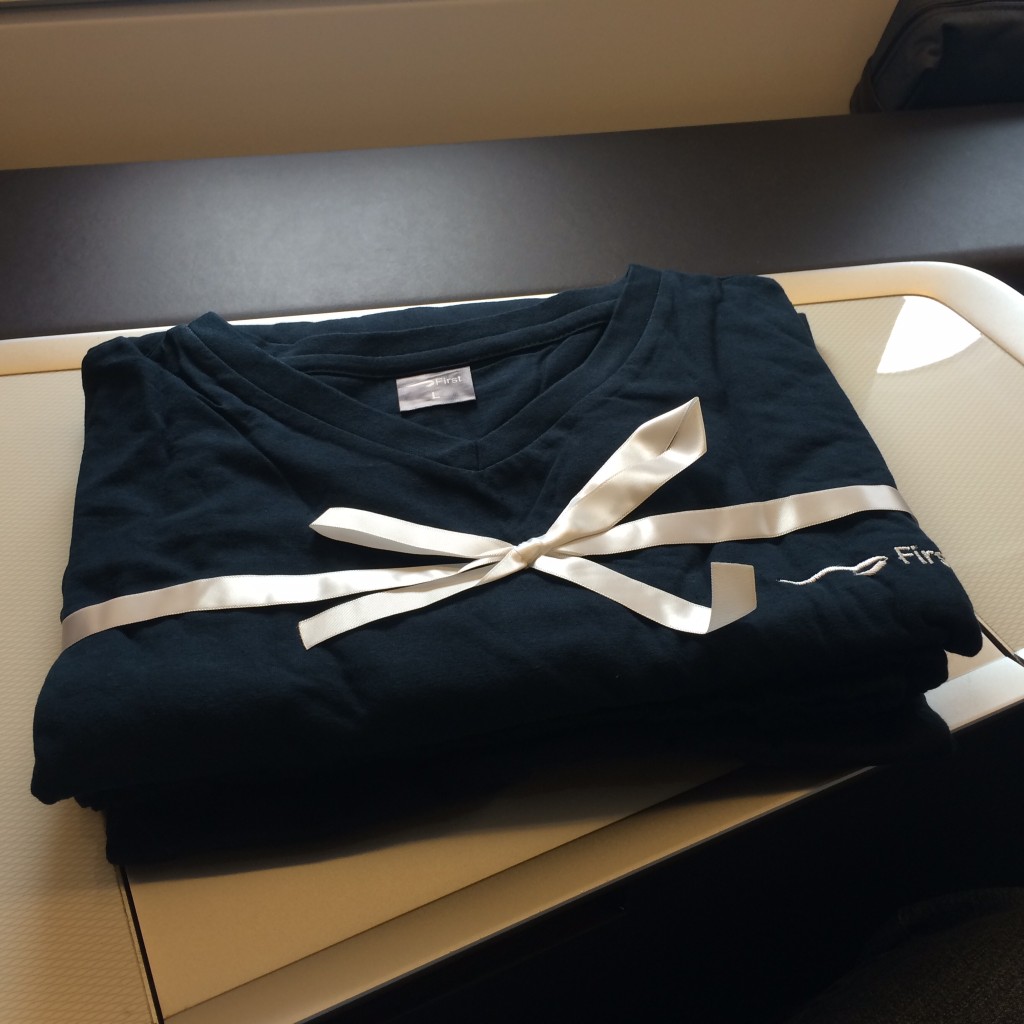 Ah, the seat.  The A380 cabin is unlike the 747 First cabin because it does NOT taper in.   Given the additional width of the plane as well, it gave the designers a little extra space to work with.  You get a more spacious first class cabin than on other BA aircraft.

The new First Class seat is certainly classy.  British Airways has not attempted to go down the Emirates route and that makes perfect sense.  I DO like the navy blue look, and for once the colour scheme does follow through in the colours of the pyjamas and the toiletry bags.

There is a cupboard in your seat to hang your jacket …. 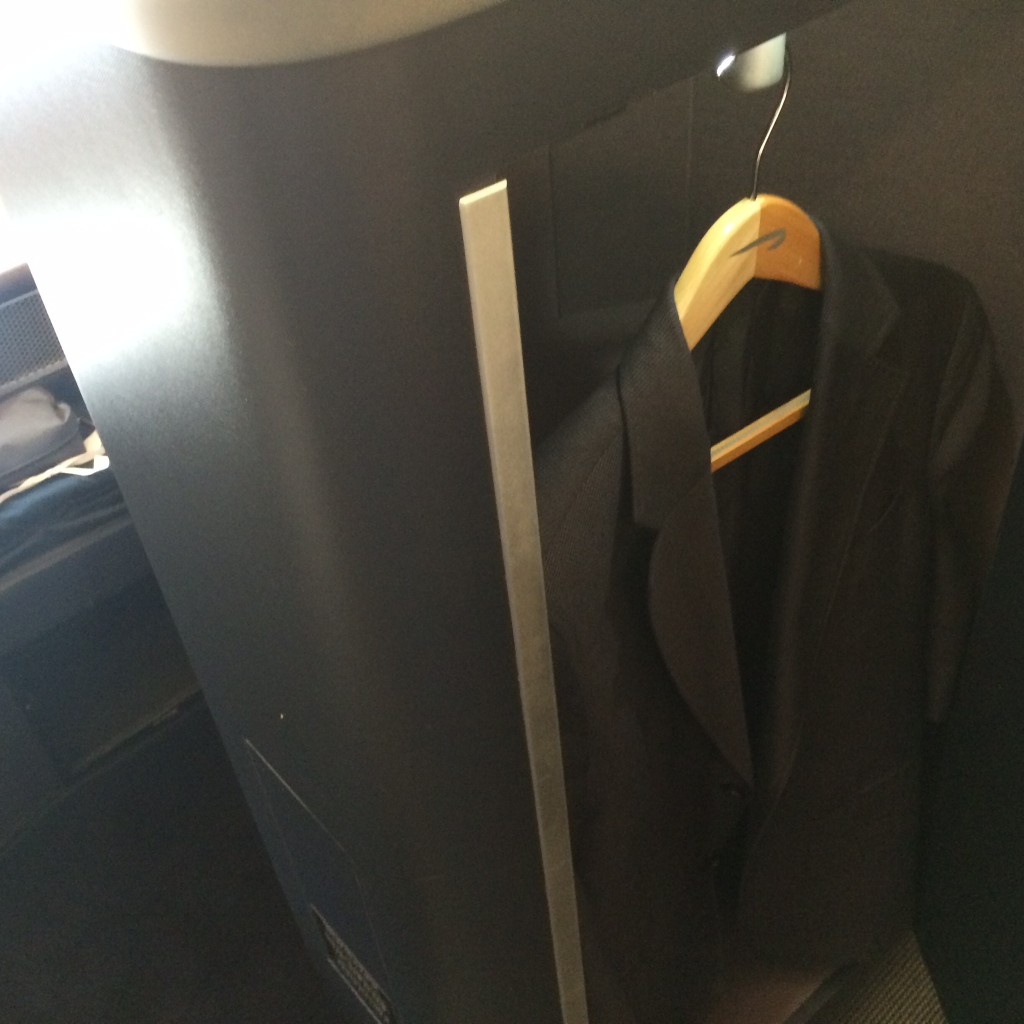 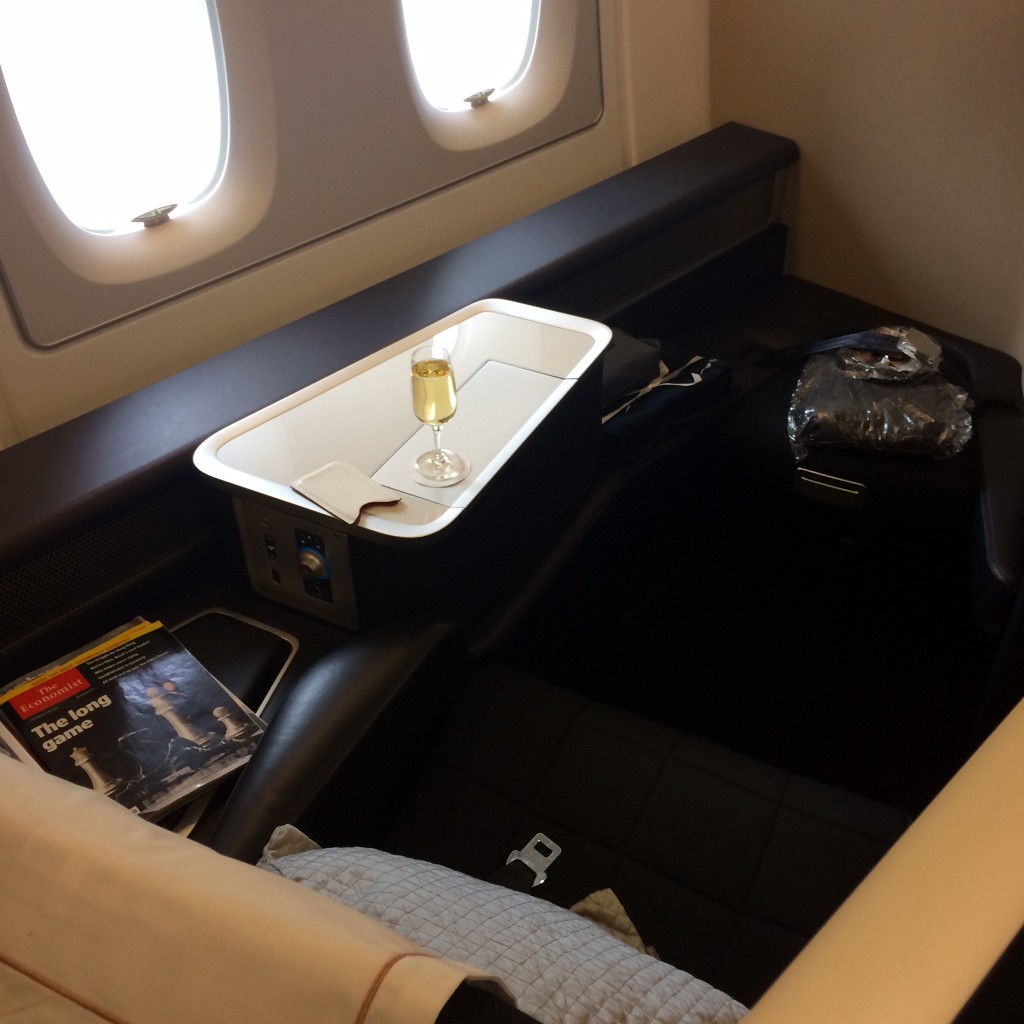 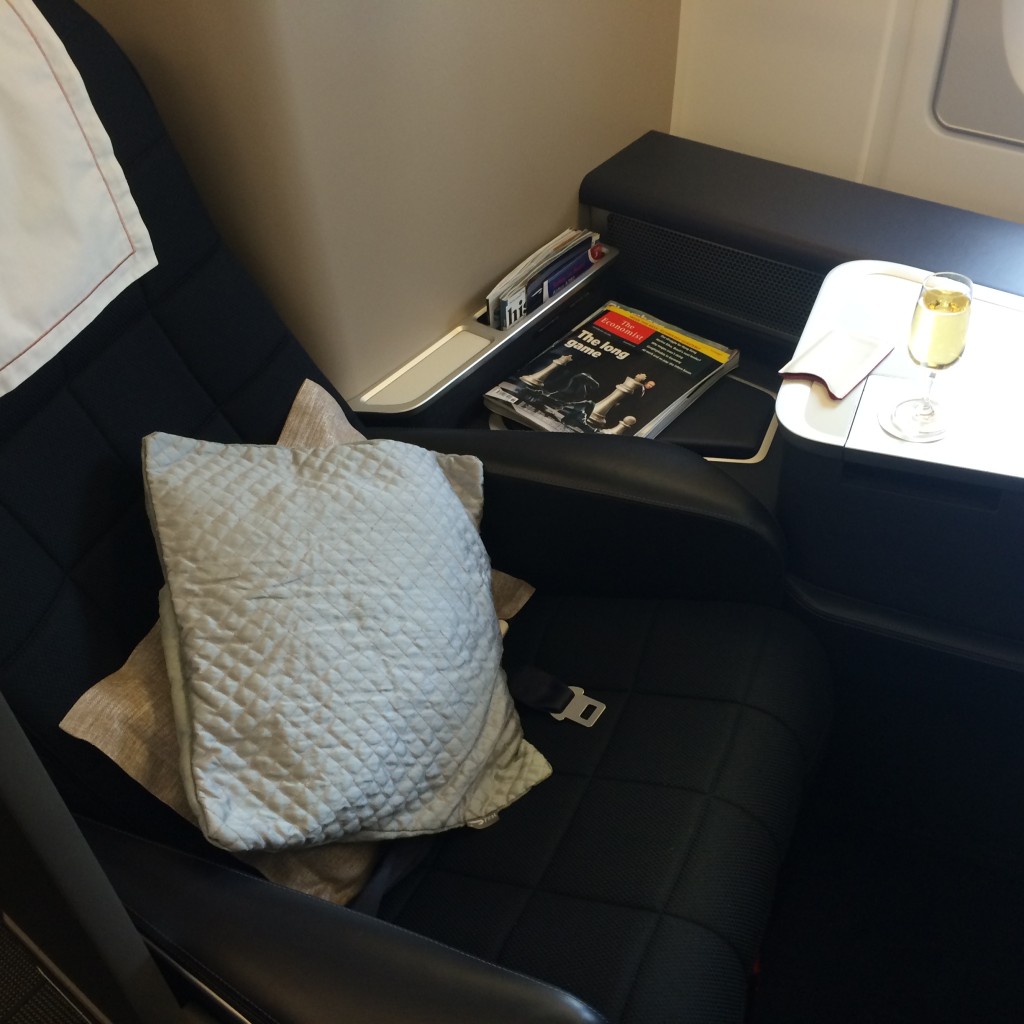 As you can see, your body is angled with your feet nearest the window and your head nearest the aisle.  There was plenty of space for my 6 foot 2 inch frame and, to be honest, I found the seat perfectly comfortable.

Whilst you can’t see it in these pictures, the A380’s do have a decent audio-visual system on board. The TV screen is a fair size – although not in the Emirates league, which is proportionately bigger than many people would have at home! – and the menu system worked surprisingly well.

You can’t complain about lack of content these days with pretty much every airline being able to serve up hundreds of movies and programmes on demand.  (I still remember the days when people would ask on Flyertalk which films BA was showing that month and would consider rebooking if there was nothing on the modest list they liked.)

I had two niggles, and I don’t know if they were personal to my seat or not.  Because the seat is wider than BA’s traditional First Class seat, but your position is still angled, I felt that I was further away from the window than usual.

This had two side effects – firstly, it was difficult to see out of the window despite having a window seat.  Secondly, the overhead light was not actually above my head or chest, it pointed somewhere inbetween my body and the window.  This meant that it was a little tricky to read.

Overall, this is not a bad product.  Compared to the Singapore Airlines First Class private suite I flew in July it obviously cannot compete.  Neither could the food match what I was served in Lufthansa First Class or Swiss First Class over the last 18 months.  If you stop trying to compare it with the market leaders, though, you are left with a classy, spacious product which I was generally happy to have spent 11 hours sitting in.

I believe that this is a mixed fleet route, staffed by the younger crew members who have been hired in recent years under newer, less generous contracts.  Whilst I have had many good experiences of mixed fleet routes, I am still not convinced that you can run the best First Class service this way.

There is no doubt that the mixed fleet crew members were keen to help, polite and enthusiastic.  To be honest, it was a bit of a relief after recent Emirates flights where the multi-national, multi-lingual crew can often lead to confusion and misunderstandings.  However, and I would be the first to admit that we are heavily in the world of ‘first world problems’ here, the cumulative effect of:

forgetting to bring around the US customs forms

trying to serve me a frozen scone and, more interestingly,

…. did add up.  The dessert wine one was, I think, typical.  Dessert wine is typically orangey-yellow in colour and comes in a very small bottle.  However, I was first brought a class of red.  I said I thought it wasn’t the right one.  It was taken away and a different, darker glass of red wine brought to replace it.  On my 3rd attempt – after explaining what they should look for – it was found and served.  It really shouldn’t take two crew members and three goes to get the wine which is officially paired with your dessert.

Overall, I enjoyed my flight.  I was travelling alone, and the ability to get a private seat in First Class is, for me, part of the appeal.  If a couple want to sit side by side in First Class, you need to sit in the middle block – in Club World you can both sit by a window, albeit facing each other.

What you need to remember is the gap between British Airways First and Club World is nowhere near as the big as the difference between World Traveller Plus and Club World.  If you had 200,000 Avios and needed to fly to California twice, you would be crazy to do one trip in First Class and other trip in World Traveller – it would be far more sensible, more enjoyable and more relaxing to do both trips in Club World.