A lot of Head for Points readers earned 1,000 – 1,200 Shangri-La Golden Circle points in a promotion they ran last October.  The reason this offer was so popular is that 1,000 points could be turned into a $100 Shangri-La food and drink voucher and, with Shangri-La due to open their hotel in The Shard in London, it offered a great opportunity for a couple to get $200 of free food and drink.

If you have not already redeemed your points, there is another option – for a limited period only.

Until the end of the year, Shangri-La Golden Circle has reduced the minimum number of points that can be transferred into airline schemes to 1,000.

Even better, there is a 25% bonus on airline transfers into British Airways, Miles & More, Enrich, Asia Miles, Velocity or Phoenix Miles.  BA transfers must be done by the end of November whilst the other five airlines are offering a bonus until the end of December. 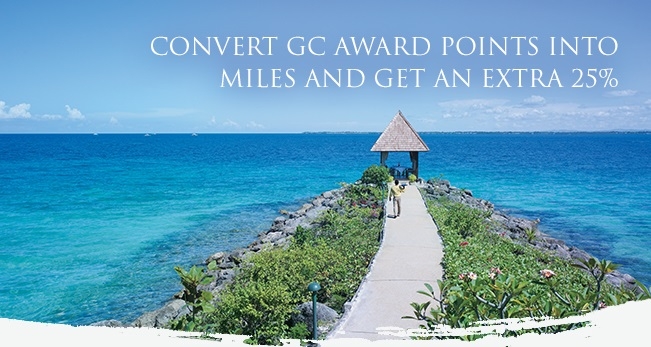 What does this mean?

You now have a choice.  Obviously it is SUBSTANTIALLY better value to use 1,000 Shangri-La points for a $100 food and drink voucher rather than convert them into 1,000 airline miles.

However, if you realistically think that you will struggle to use your points in a Shangri-La hotel before they expire, this offers you a decent opportunity to use them for something else.  Shangri-La is a partner with 27 airlines so you could receive (with the 25% bonus) 1250 Avios, 1250 Miles & More miles, 1000 Virgin Flying Club miles etc.

Here is the small print of the bonus miles promotion:

Eligible Golden Circle members will receive 25% Bonus Miles when they convert GC Award Points between noon (HK Time) of 3 October 2014  and noon (HK Time) of 31 December 2014 into miles of the selected participating Frequent Flyer Programmes (except British Airways Executive Club valid until 30 November 2014) . 3) A minimum of 1,000 GC Award Points is required for each conversion request with additional point conversions made in increments of 500 GC Award Points. 4) Once the conversion is made, no amendment or cancellation is allowed.  The conversion is non-reversible and non-redeemable for cash. 5) The 25% Bonus Miles will be awarded upon confirmation of the conversion request and credited to the selected Frequent Flyer Programmes within 6 to 8 weeks after the completion of promotion.

Do you know that holders of The Platinum Card from American Express receive FREE Shangri-La Golden Circle Jade status for as long as they hold the card?  It also comes with Marriott Bonvoy Gold, Hilton Honors Gold, Radisson Rewards Gold and MeliaRewards Gold status.