Back in October 2013 (yes, 2013) I wrote about a promotion launched by Shangri-La Hotels.  Basically, if you played an online game once a week for six weeks, you would receive 1,200 points in their Golden Circle loyalty scheme.  The most useful redemption was spending 1,000 points for a $100 food and beverage voucher.

At the time, Shangri-La was not present in the UK.  However, I knew that their hotel in The Shard was under construction so I recommended that readers who are often in London should take part. 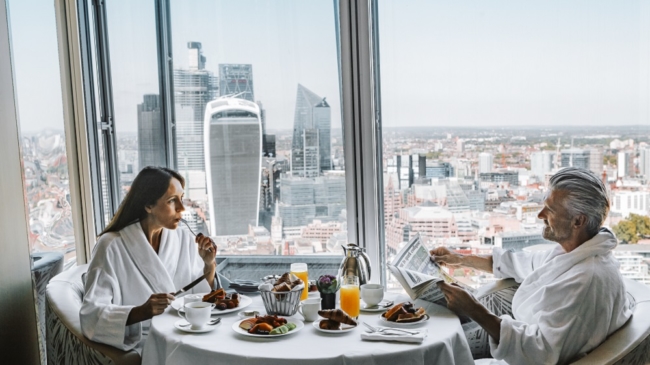 There were ups and downs along the way.  The opening of The Shard was delayed and delayed.  Once it opened, Shangri-La put a temporary block on redeeming Golden Circle points.  Finally, from September-ish last year, redemptions were allowed.

Last Wednesday, my wife and I finally made it along to Ting, their main restaurant.

We were given an excellent table directly next to the windows on the 35th floor.  Service was very formal and attentive, albeit lightened by the clientele – because it is the main hotel restaurant, they cannot easily impose a dress code or keep out children. We had the £49 four course set dinner menu topped off with two glasses of wine.  This is not a restaurant site so I will not discuss the menu, but it was all very well done albeit with modest portion sizes.

With service, we only paid a nominal sum on top of the £122 credit we received from our two Golden Circle redemption vouchers.

Our vouchers were issued swiftly by the hotel reception desk (not the business centre as is normally the case with these vouchers, Cairns works the same way a reader told me) when we arrived.  Despite the warnings about taking photo ID etc nothing was required.  I was even issued with the voucher for my wife even though she had yet to arrive.

To keep with the style of evening, I used some free Uber credit to have a Mercedes S-Class pick us up at the lobby and take us home.

If you haven’t yet managed to redeem your Golden Circle points, make sure you do – it made for a very pleasant evening and was (just about) worth the 435 days wait.

NOW LIVE: Convert your BPme Rewards points into Avios – and get a bonus