This is second of my reviews following my recent trip to Abu Dhabi.  Other articles cover the Hilton London Heathrow Terminal 4 hotel, the Business Class Studio on the new Etihad A380, the Jumeirah At Etihad Towers hotel in Abu Dhabi, the Etihad Premium Lounge in Abu Dhabi and the First Class Suite on the Boeing 777.

This article is my review of the Etihad business and first class lounge in London Heathrow Terminal 4.

I was in Terminal 4 for 6.15am and it was almost deserted.  My brain had not yet engaged, however, and I managed to both forget to remove the liquids from my baggage and remove the coins from my trouser pockets, which is impressive.

The Etihad lounge is opposite Gate 10.  It is directly above the hugely impressive SkyTeam (and Priority Pass) lounge which means you need to take a lift to get to it.  This always makes me think of the BA lounges at Gatwick which is never a good sign!

The lounge was closed over Christmas for a makeover as Etihad looked to upgrade its facilities before the start of the A380 services. 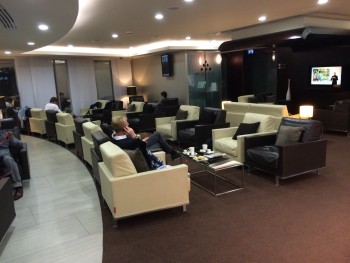 It is not a huge lounge but, given the number of passengers it serves, it is more than adequate.  I would guess it is a bit smaller than the Qatar lounge at the other end of the terminal.  There is no separation between what is offered to First Class and Business Class passengers.

To be honest, things didn’t start well.  Keen for breakfast, I went into the dining area: 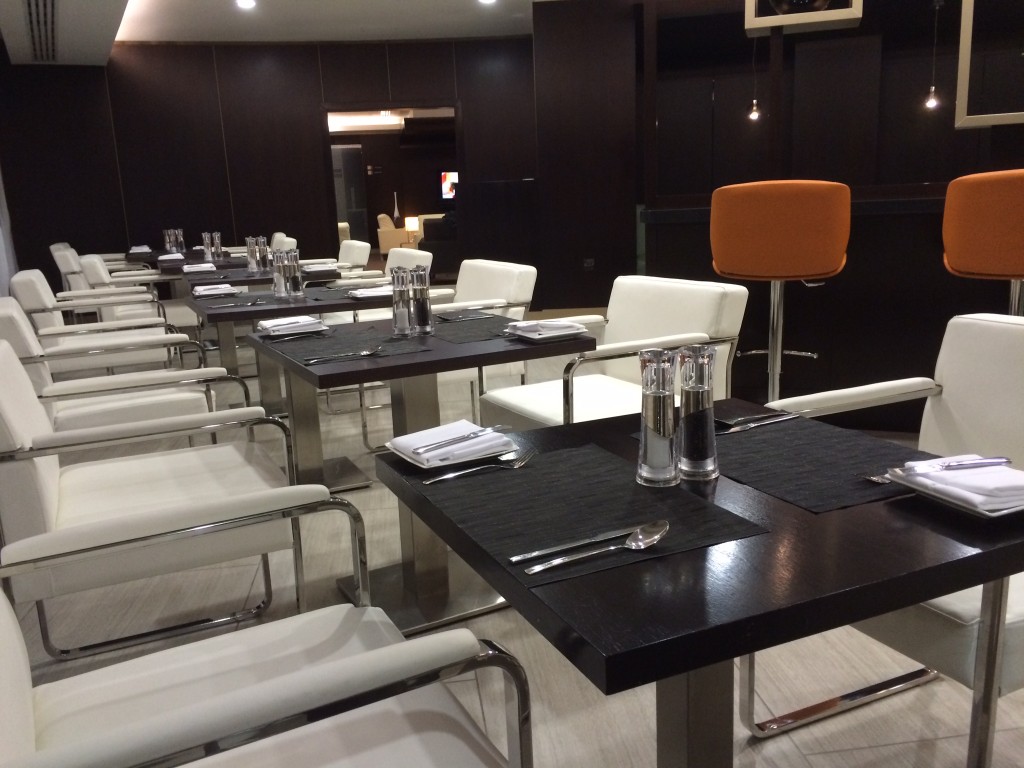 and found myself facing one of the most dismal buffets ever seen.  Slightly thrown by this, I grabbed a yoghurt and headed to a table. 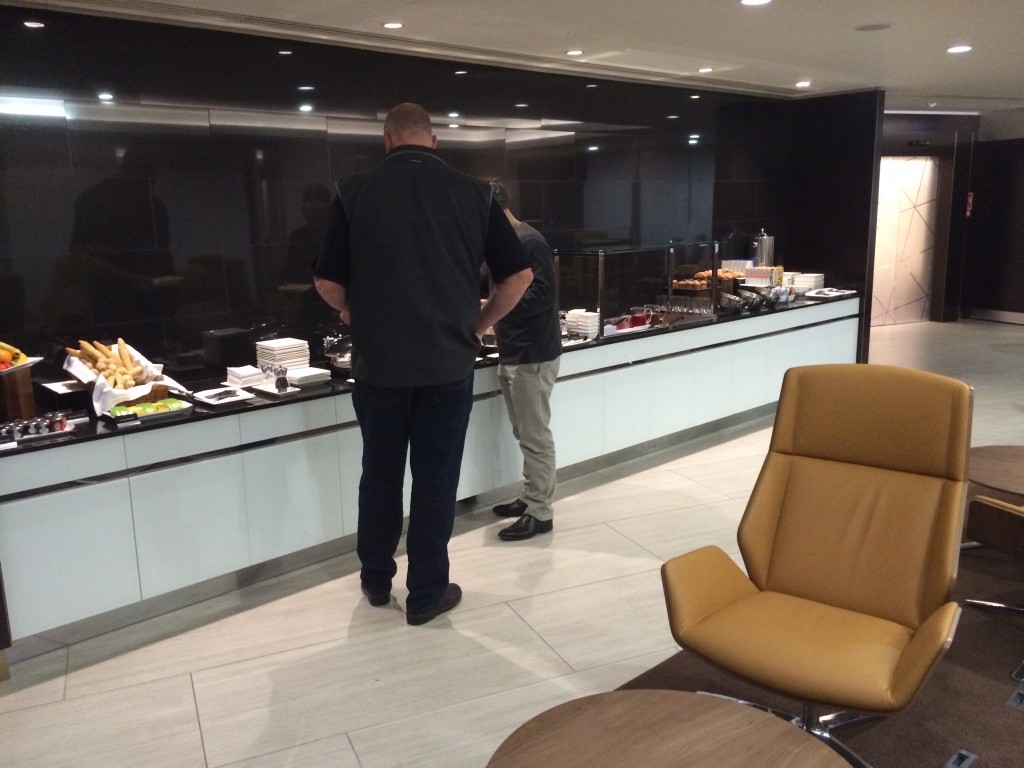 Only then did a staff member pounce on me and give me a menu.  This had a substantial selection of dishes on it, all cooked to order, and my mood improved substantially!  I have no idea why they don’t leave the menus on the table in the first place.

I was immediately offered a smoothie, and an eggs benedict was promptly delivered: 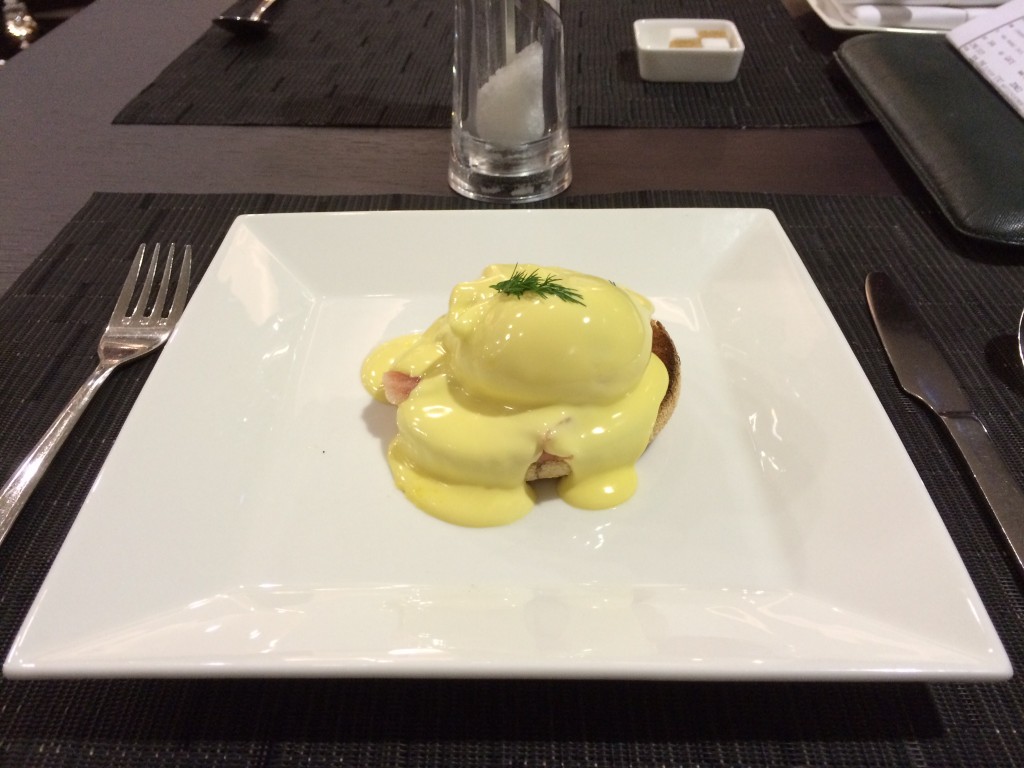 Whilst eating, I was approached by a therapist from the Six Senses Spa.  I hadn’t noticed that the lounge even had a spa.  Unlike the British Airways spa, where it is basically impossible to get a treatment unless you are flying in First Class and pre-book, Etihad had plenty of capacity and were keen that I indulged.

It turns out that they have three therapists working at a time so, with relatively few premium passengers per day and 10-15 minute treatments, you should have little trouble being seen.  An hour later I turned up for my appointment and had a neck and back massage.

Post massage, I retreated to a chair and the newspapers.  It is worth saying that I have never experienced such a high level of service in an airport lounge.  Every 10 minutes someone  would come along to see if I would like another drink or some more food, and this was on top of the pro-active efforts by the spa staff to get you along.  The picture below was taken when I arrived – it got busier as departure approached! 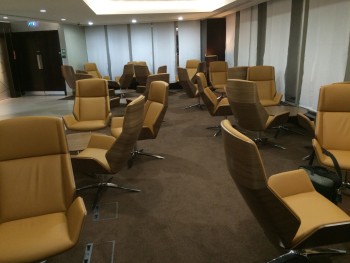 I should also add that if you have kids, the Etihad lounge has a super little kids room which is far better than the one British Airways can muster in Galleries Club: 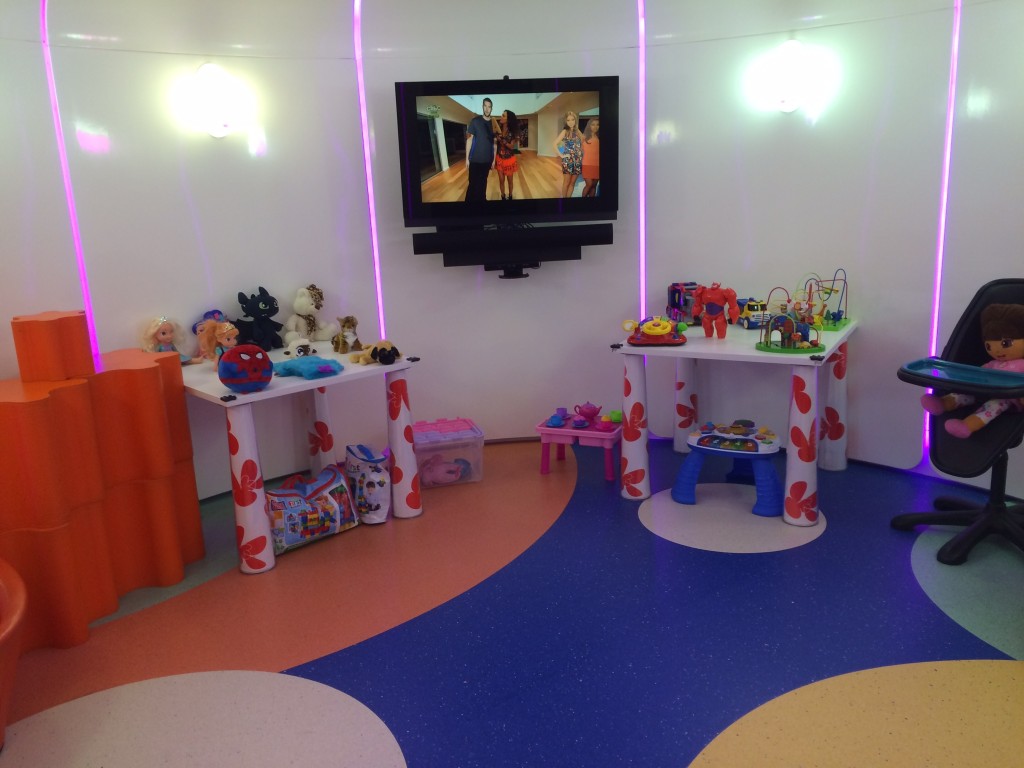 There is also a decent bar, with the level of custom you would expect at 6.30am! 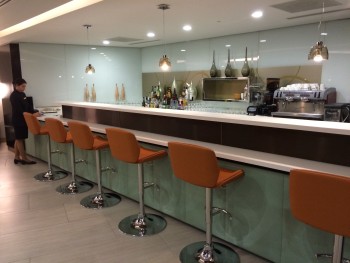 My overall impression is that this is a very well run lounge where the staff will take good care of you.

I didn’t get the sense that it offers the same gourmet dining or high end drinks that the Qatar Airways Premium Lounge offers (see my review) – that remains the classiest lounge at Heathrow in my view.

This could be an unfair criticism, of course, since I was there for breakfast which is not necessarily representative of what is available for lunch or dinner.  The Etihad lounge is a massive improvement on the Emirates lounge in Terminal 3 (review) which has little to recommend it apart from direct boarding to your aircraft.

Etihad planes appear to depart from Gate 10, directly opposite the lounge, so when it was time to board it was a quick trot down in the lift and a 30 second walk to the gate.

Annoyingly, because of the way the windows and the airbridges are laid out, it was impossible to get a photo of the one-and-only brand-new Etihad A380!  Here is a photo taken by a HFP reader on the inaugural day in December – my review is on the way. 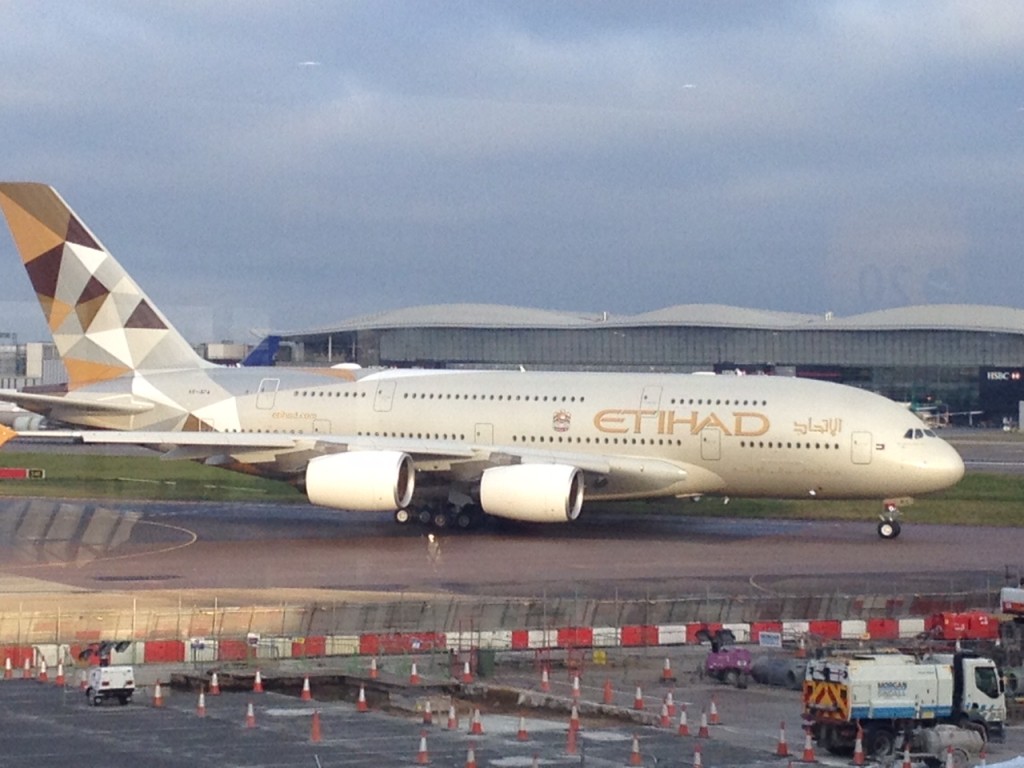 Click here for the next review in this series – the Business Class Studio on the new Etihad A380.

More photographs of the Etihad Premium Lounge at Heathrow can be found on our Instagram feed.