I’ve been following HfP for a while now and accumulated over 800,000 Avios, not to mention various hotel status and points.  With my finances maxed out due to my recent house move, new car and forthcoming wedding I decided a ‘budget trip’ to somewhere sunny was in order for February 2015. 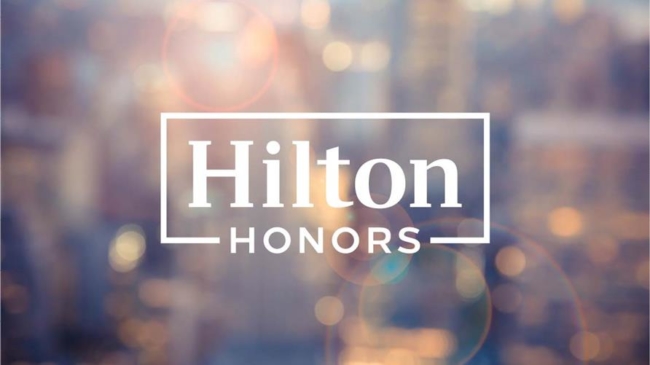 I’d followed with interest the redemption opportunities for Hilton and spotted that there was an interesting opportunity to redeem Hilton HHonors points for a bargain break to the Hilton Salalah Resort in Oman.  This is my review.

Being a Category 1 hotel, but boasting 4 star status, the Hilton Salalah Resort seemed like too good an opportunity to miss.  Back in July I booked a redemption stay for February 2015 for 8 nights at a cost of 34,800 points.  This was even lower than the headline cost of 5,000 points per night due to the discount I received due to my Hilton status.

The trip was prompted by a Qatar Airways sale which offered return fligths from LON-SLL (via Doha) in economy for £355 each.

At the time I booked I still had Cathay Pacific Marco Polo Gold status from my Amex Platinum, which allowed me to book our seats.  In the economy cabin of a Qatar A340-600 you are fairly limited on choice – it was about avoiding the really rubbish seats as opposed to booking the best ones.  Unfortunately as my status expired three weeks before I travelled I was not able to use the lounge.

The IFE was much better than expected; I certainly wasn’t expecting multi channel IFE, which took the edge off the length of the flight and the fact that the IFE ‘box’ took up about 15% of the seat width in front.  Certainly one to be aware of next time when booking seats! The legroom under the window seat was particularly bad due to the curvature of the fuselage.

Once at Doha I was blown away by the size, cleanliness of the airport and was looking forward to relaxing in the Oryx lounge for a couple of hours with my Priority Pass. Unfortunately when I got to the lounge they declined access (they wouldn’t say why) which was a real disappointment since when I checked (admitedly a few months prior) they had been part of the programme.

I whipped out the Amex Platinum and they said they would only give access for Platinums issued in the Middle East.  Feeling a bit tight I decided not to part with $45 each for a 2 hour wait; instead I went exploring. If I had my Marco Polo Gold I could have accessed the Al Mourjan lounge complete with Krug; I’m so gutted I didn’t refer my other half to Amex Platinum to keep our benefit ‘alive’.

The airport was big enough with enough facilities to checkout to keep us from being bored, and before we knew it we were at the gate waiting to board the flight to SLL on QR1143 (Airbus A321). Although a smaller plane the control boxes for the IFE seemed to be tucked away, and the screens smaller so there wasn’t quite so much a problem with the legroom. This plane was full to capacity with the exception of 4 empty business class seats… I was really missing business class now.

Arrival at SLL was not quite straightforward.  Our steward missed out distributing the landing cards to us, so we queued to get to the desk only to be sent to the back of the queue again! 2 hours after landing we were finally able to collect our bags. 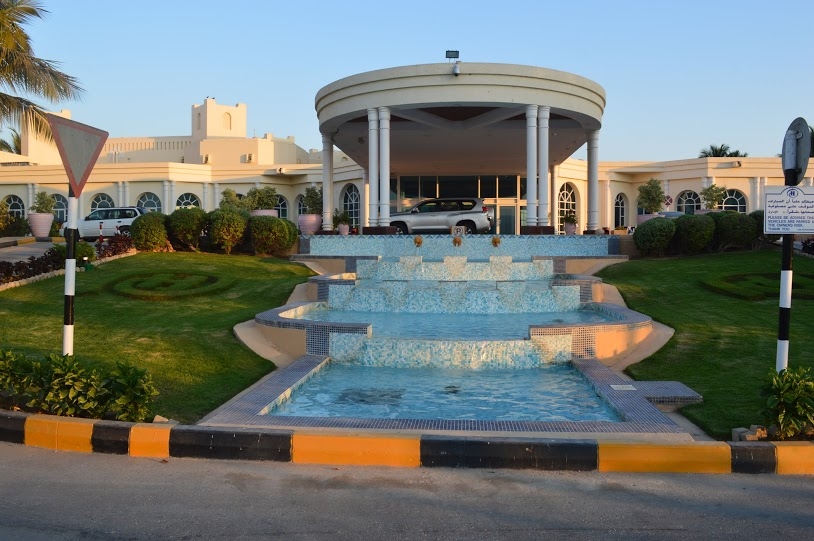 The Hilton driver had other thoughts than waiting which left us to catch a cab to the hotel … this was about 15 minutes away and a fare of about 4OMR (half of what the Hilton was charging).

When we arrived we were greeted as Gold members and shown to our room. We booked a standard room but were upgraded to a huge Seaview Deluxe Room. First impressions were of a large room, little dated decor, but perfectly comfortable – the extended amenities sets were very much welcome as I’d forgotten my razor. 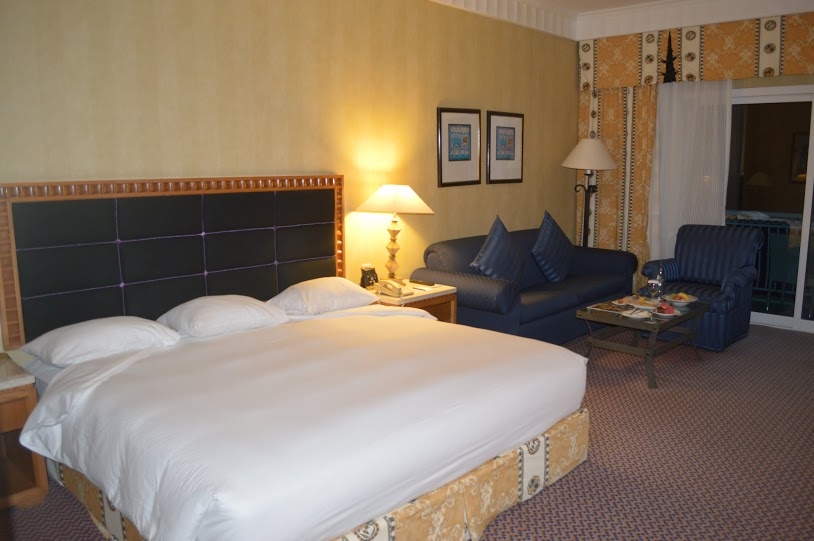 The table in the room was set out with a fresh fruit welcome; a large bottle of sparkling water and a nicely decorated valentine’s cake and some Omani sweets (all complimentary and very well received after a long journey).

The bed was great, about 50% bigger than the UK super king beds and very comfortable; the room included mini-bar a good selection of TV channels and a good sized bathroom with bidet, bath and shower, aircon and heating ; all of which worked. 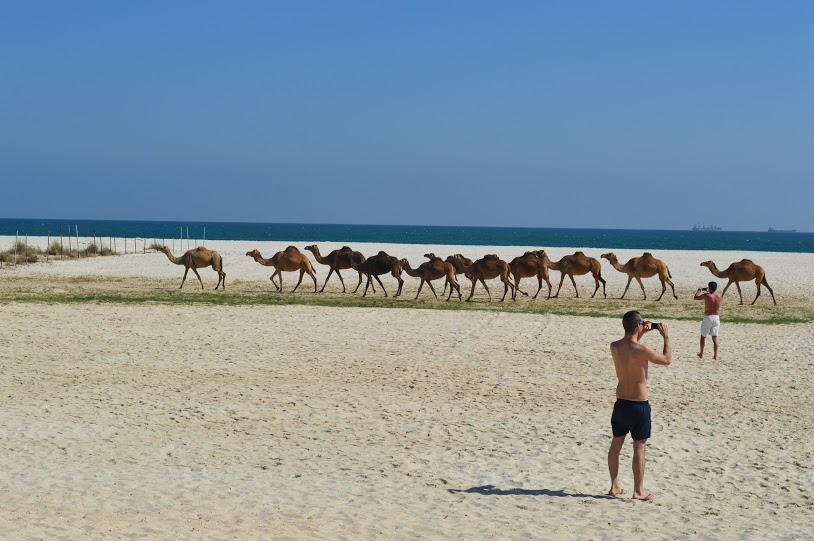 The hotel itself was a little bit dated, but the staff were brilliant, nothing was too much trouble for them. The gym was well equipped but underused and the pool was heated with a waterslide for the kids. The hotel has its own beach which is supposed to be private, but that didn’t stop a heard of camels trooping past and the occassional 4×4 driver exploring the beach area! 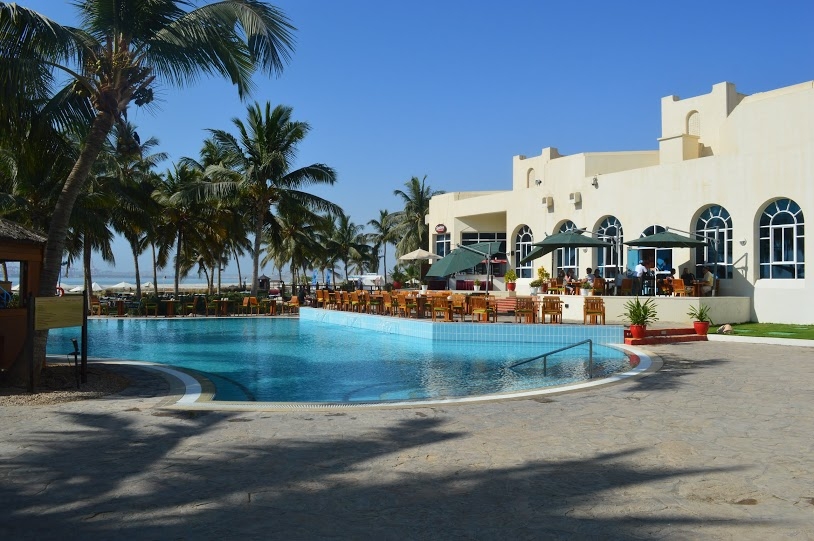 The hotel was well equipped with bars and restaurants (I think four in total) and is one of a handful of places to serve alcohol in the city. Breakfast was served buffet style (being Hilton Gold this was free) with a decent selection of fruits, cold cuts, hot food, porridge and curry! The waiting staff were good and always on hand to top up coffee’s or teas. The chef at the omlette station was kept busy with waffles/ omlettes and eggs any way you’d like them.

The dining options are here.  Lunch was served at all of the restaurants and dependent on the spot there were different dishes on offer including a fixed price buffet.  For dinner there were themed nights on different days; if you go I’d recommend the Barbecue Night; they spent ages setting it up and there was a huge array of food from fish to meats, many different vegetarian options, rice, sushi, curry, salads, humous, dates, cheese, cold meats and a choice of at least 10 desserts that I counted! 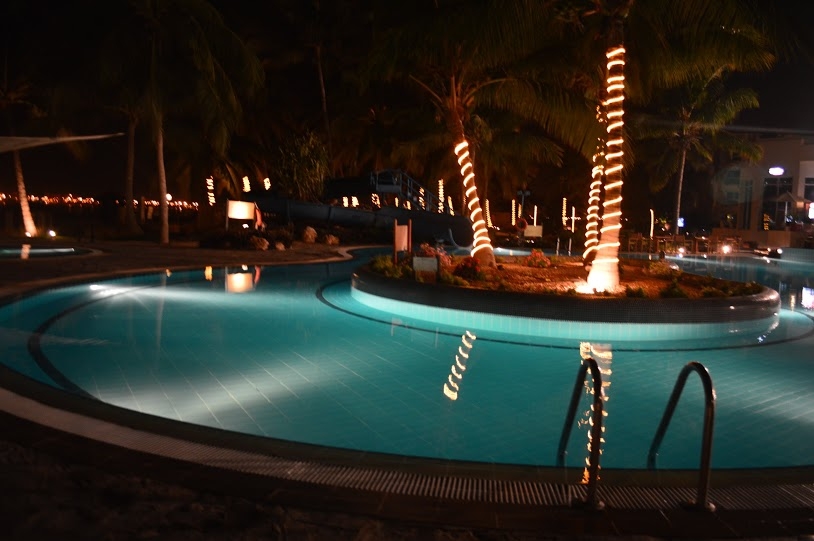 The clientelle of the hotel varied; I would say 60% German, 15% Scandinavian, 15% French and the rest either British, Russian or American. Most of the Americans and Brits there were Merchant Navy on the way to the port of Salalah which could be seen from the hotel. It wasn’t intrusive, but it did make for an ‘interesting’ view. There were some people there who were on all inclusive packages, but they weren’t the beer swigging types that you’d expect to see in the Costa’s and due to the residents being mainly over 50 the whole place was quiet from about 10pm.

For the return journey we were back on a much less crowded A321 (departed at 5am) and then the short (3 hours) back to Doha. We only had 1 hour between flights on the way back so we made our way straight to the gate and got ready to board the A380 back to Heathrow.  Again, we’d booked our seats ahead using the status I had and made my way to seat 62E and settled in for a great flight home.

Would I recommend it?  YES. As a bargain redemption it couldn’t be beaten – however there is a hotel being built next door so be wary of building noise if you book!  Salalah is not an easy place to get to; with no direct flights from the UK it makes senses to change either at Muscat, Abu Dhabi, Kuwait or Hamad (Doha).

Even though our Qatar tickets were non flexible economy we managed to pick up 90 tier points and 1922 Avios for just £355 – plus eight nights accommodation for free.