This is my review of the Park Plaza Westminster Bridge hotel in London.

Regular readers will already know that I checked in to the Park Plaza Westminster Bridge hotel last week on the £27 promotion run by lastminute.com’s ‘Top Secret Hotels’ page.  Despite it being a third-party booking, I received Club Carlson points for the stay.

Why did I come here?  Well, at £27 for two days of office space it was a viable alternative to working out of Regus.  Secondly, this is a very popular Club Carlson redemption – I have redeemed this hotel twice for my brother and his family, although I never visited him there – and so of interest to readers.  (It will become a less popular Club Carlson redemption when it jumps from 50,000 points per night to 70,000 on June 1st.)

The Park Plaza Westminster Bridge sits in the middle of a traffic island (oddly, not a major issue) directly opposite Big Ben and the House of Parliament across the river.  You are adjacent to the London Eye, the London Aquarium and Waterloo station and all of the family restaurants etc that surround those two places.  For a tourists, it is a great spot. 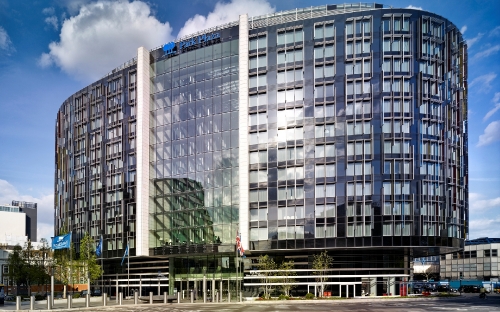 The hotel is round.  This means that the outer rooms are wedge shaped.  There is also a strip of smaller rooms which run through the centre of the building – these obviously have atrium views and presumably little natural light.

As a Club Carlson Gold via my Amex Platinum card, I was upgraded to one of the studio rooms on the outside of the building.  This was impressive and made clever use of the space.  Nearest the window is the sleeping area: 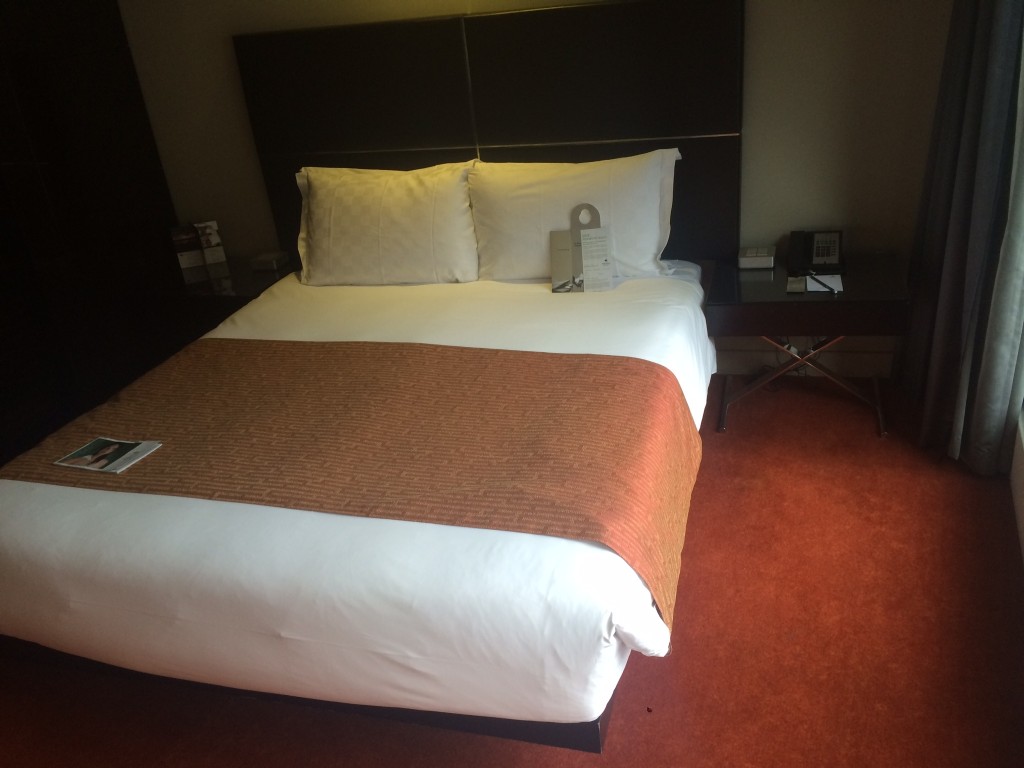 with a very modern wardrobe: 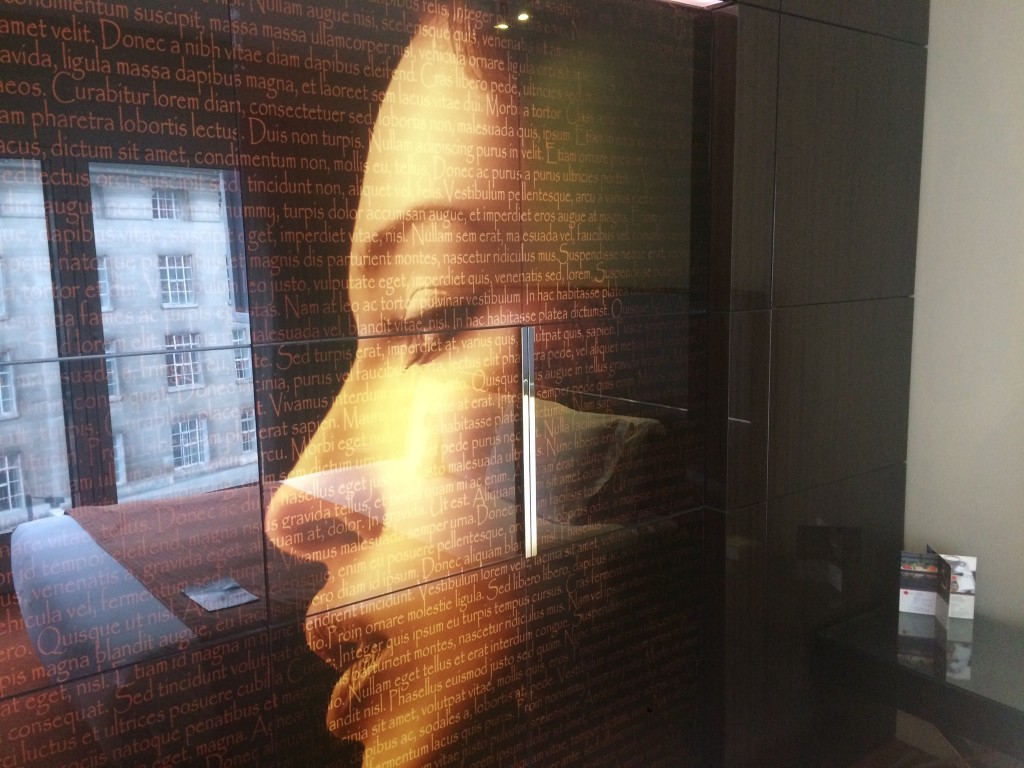 and a TV opposite: 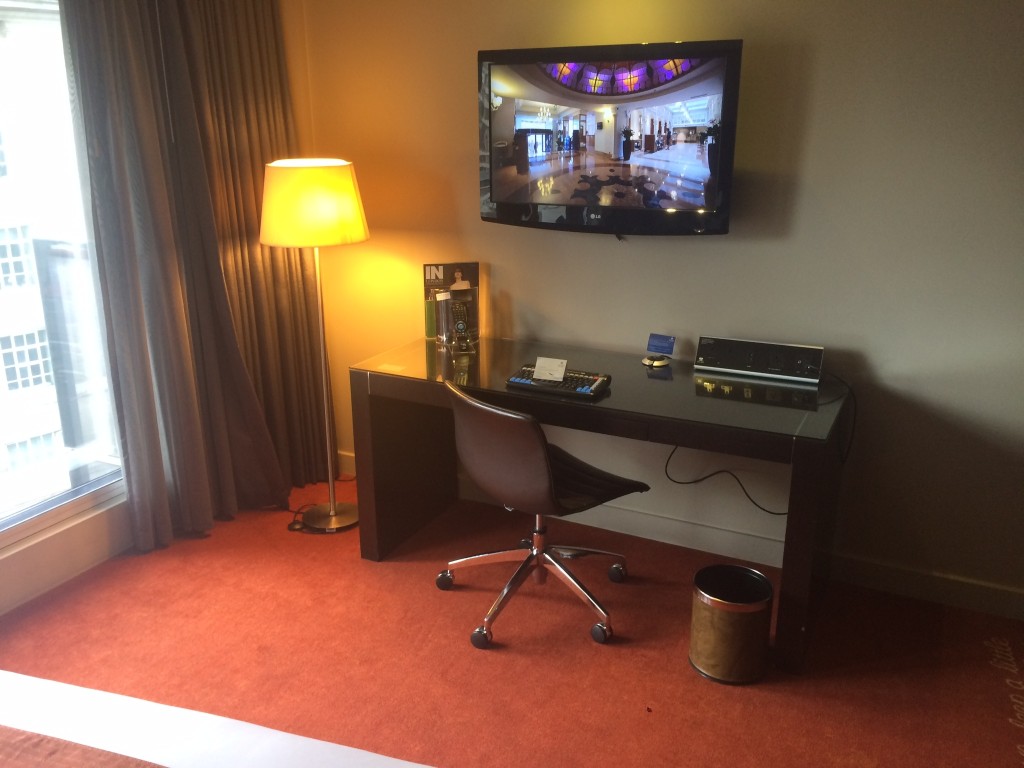 Then comes the bathroom (there is a full size shower as well but it is out of shot).  Toiletries are from Elemis: 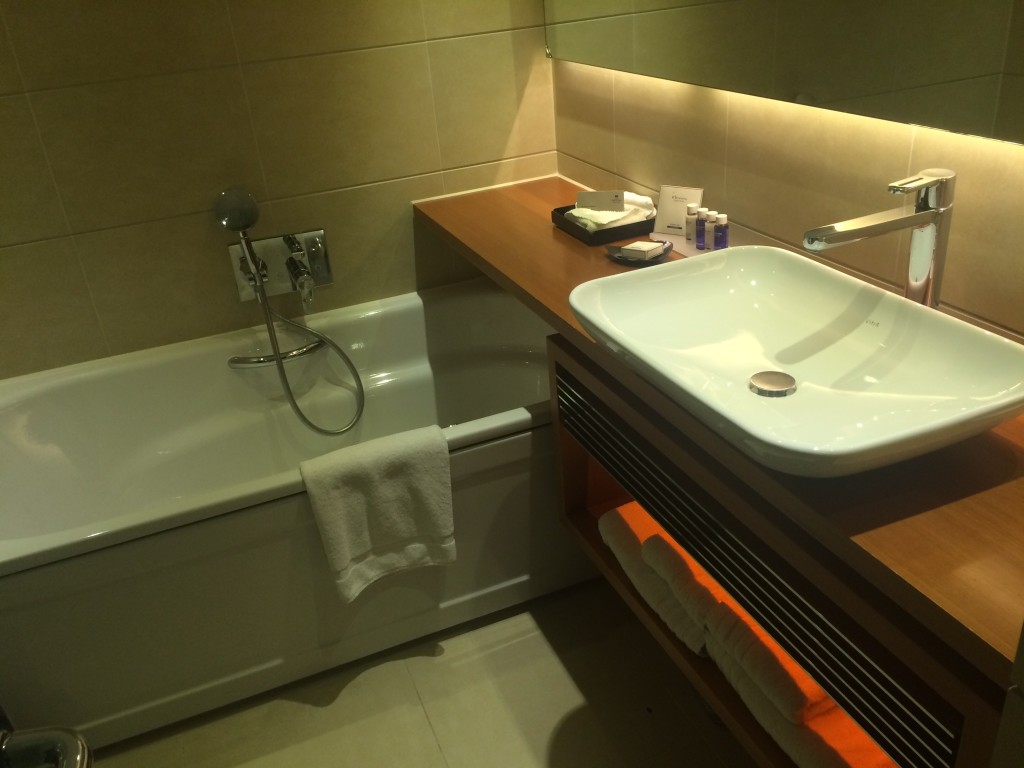 Then, the most interesting bit, a proper seating area: 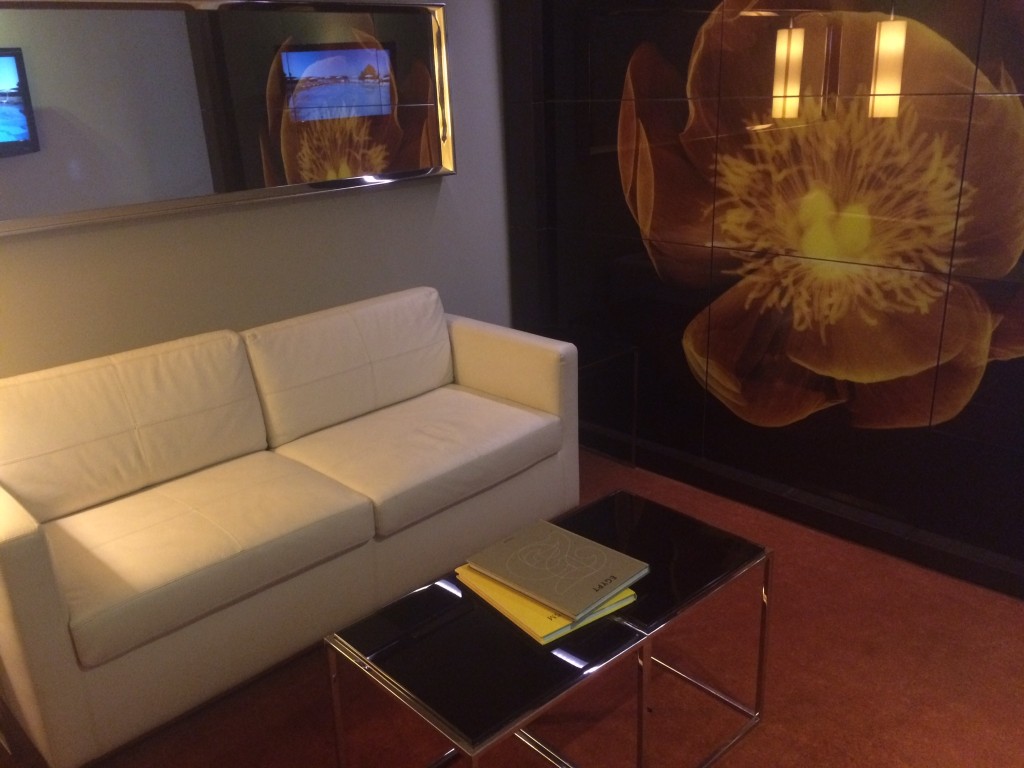 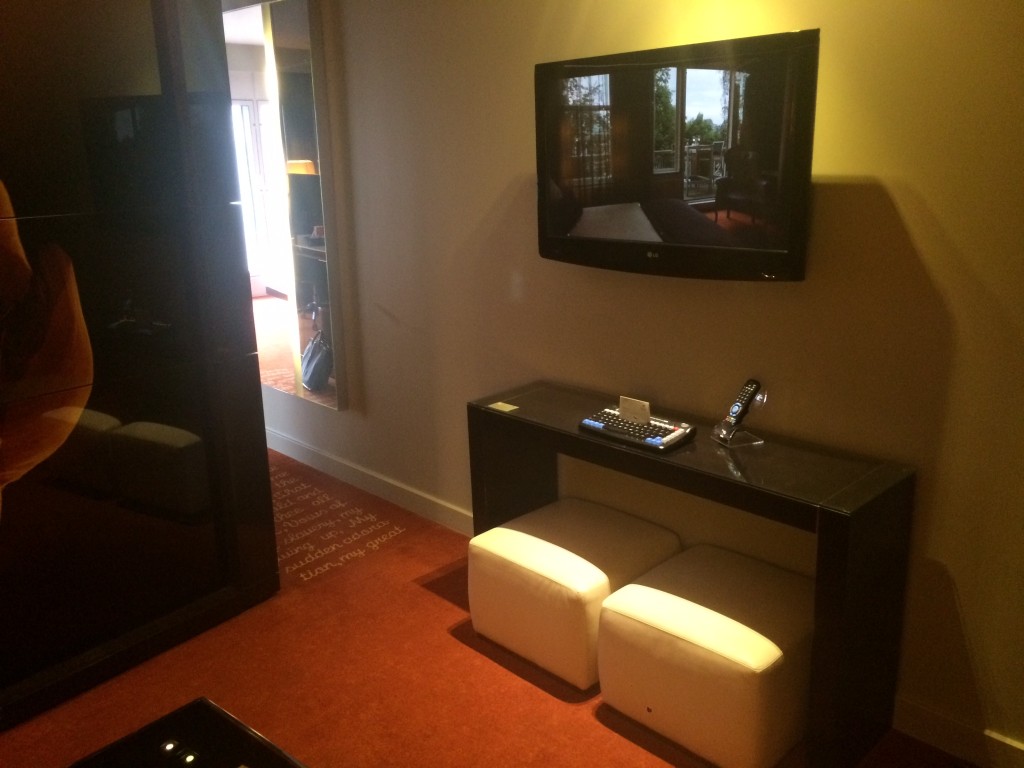 It is quite homely.  The quality of finish is excellent as you would expect from a relatively new hotel.

As I didn’t stay overnight I did not try any of the restaurants.  There is no shortage of options.  As well as a handy café: 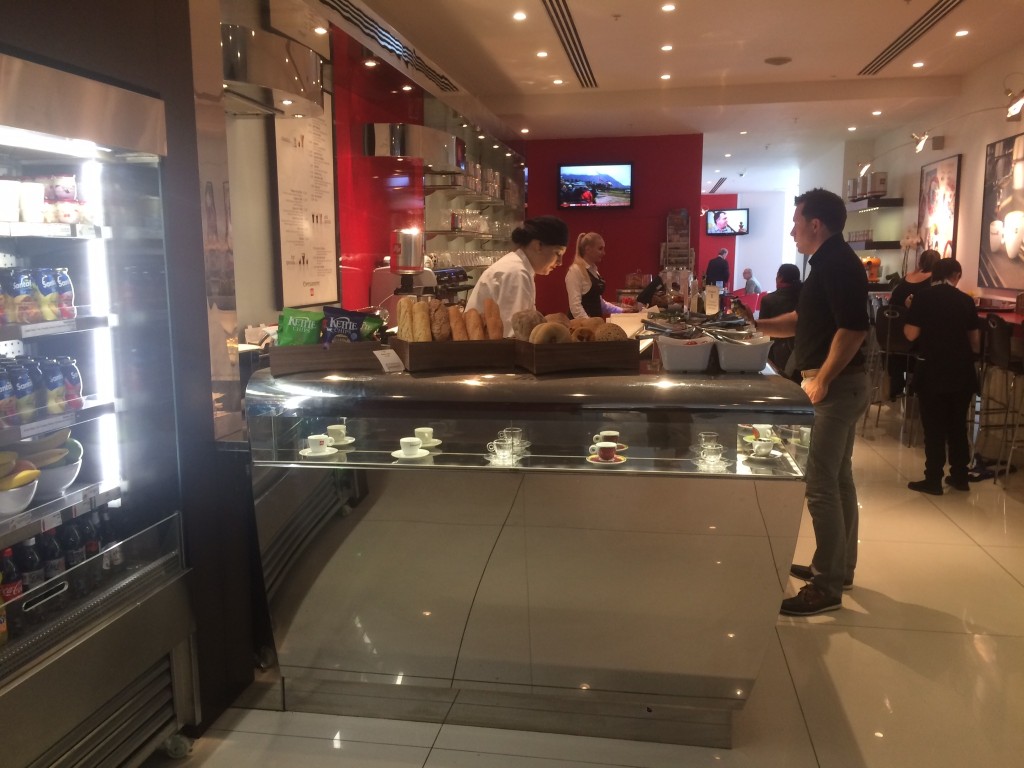 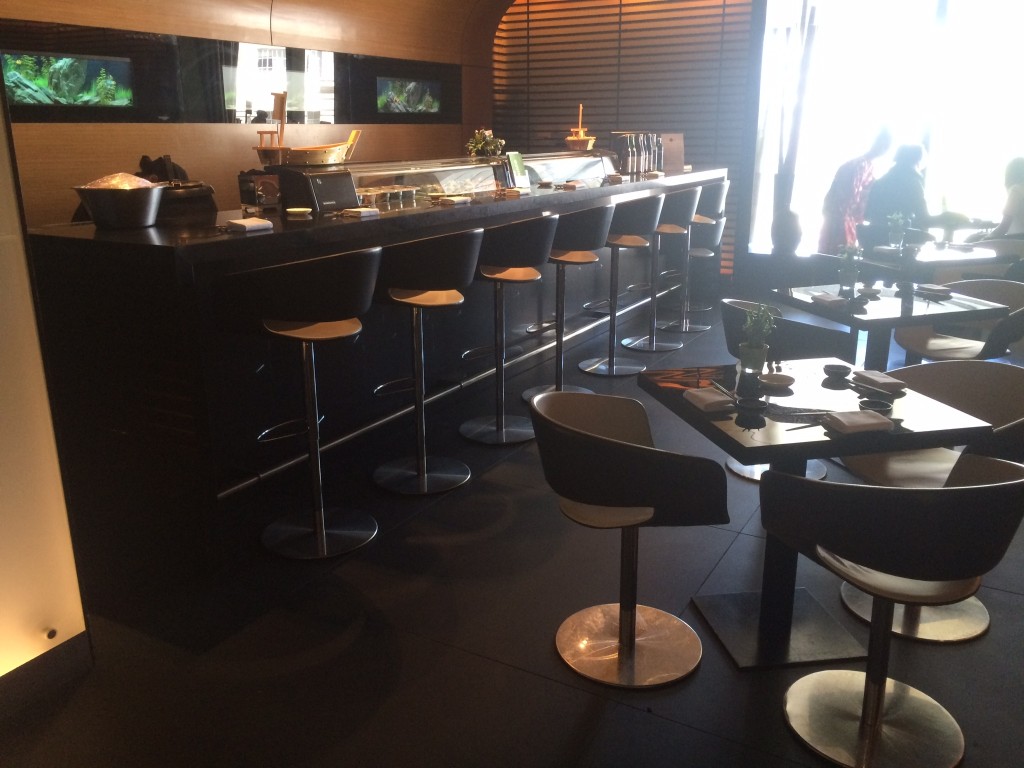 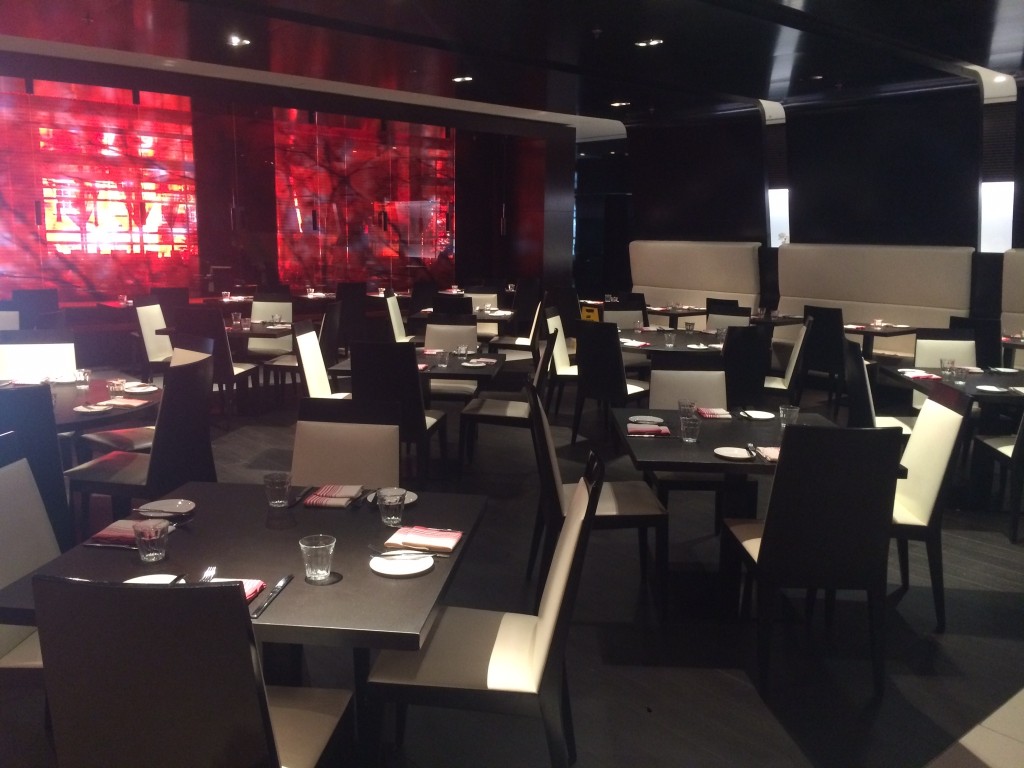 with a big wine selection …. 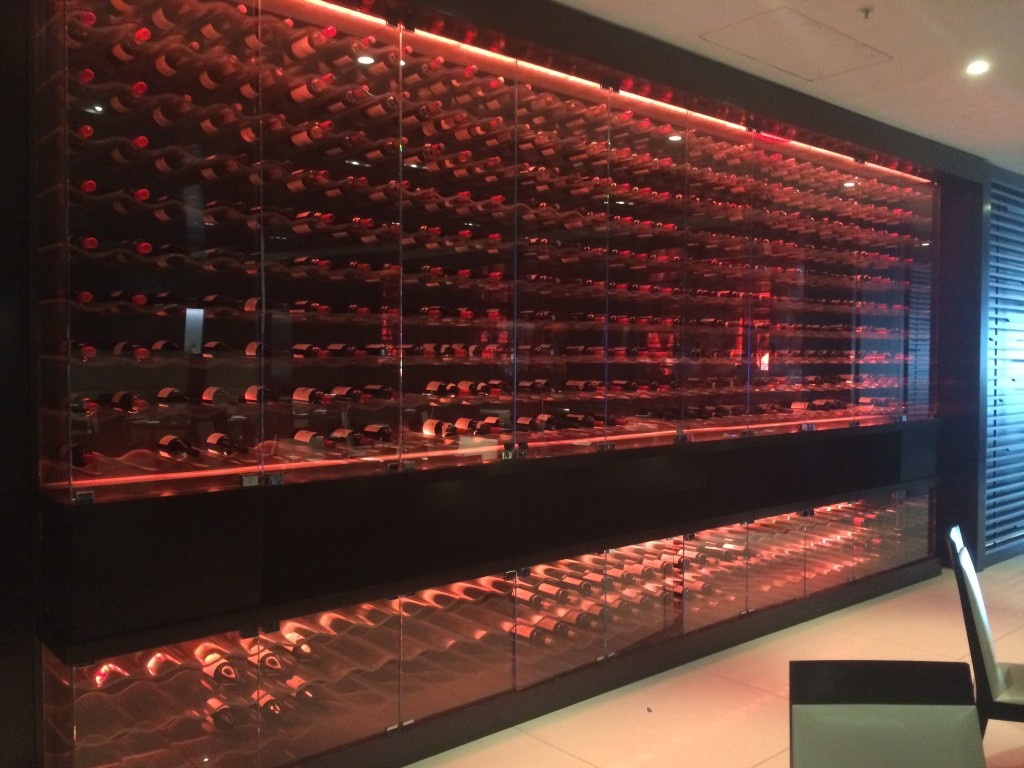 …. and a large main bar.   You are unlikely to go hungry or thirsty. 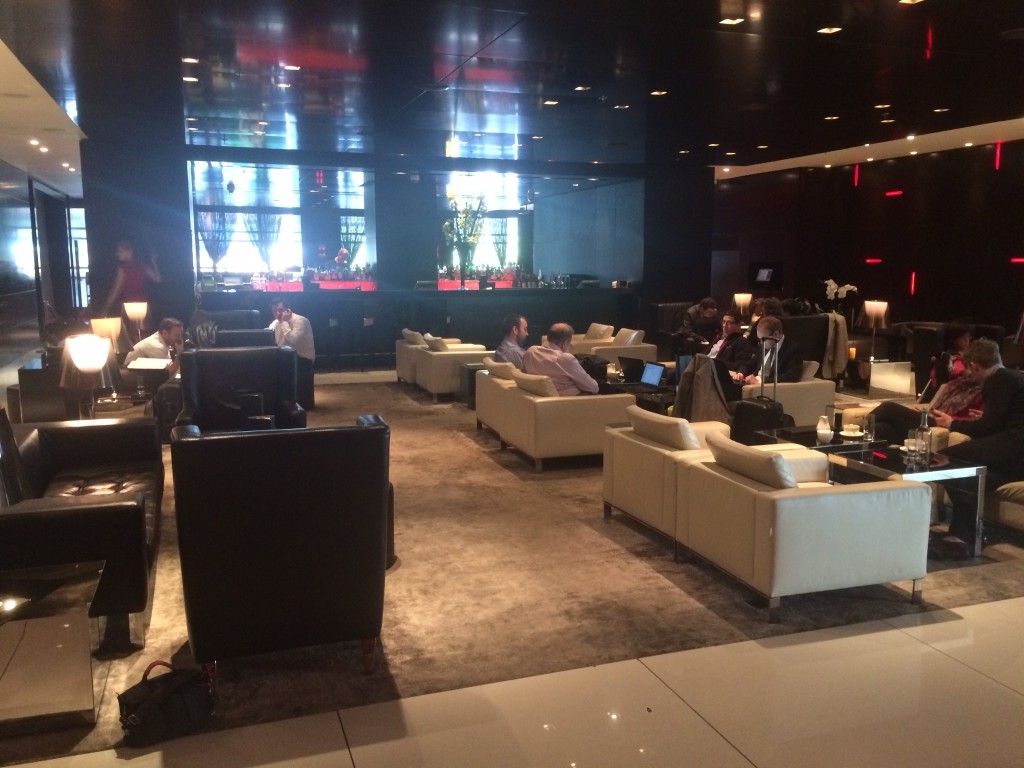 When it comes to leisure, there is an upmarket-looking spa and a swimming pool.  This is a library picture of the pool as there was a ‘mother and toddler’ swimming class on when I went down. 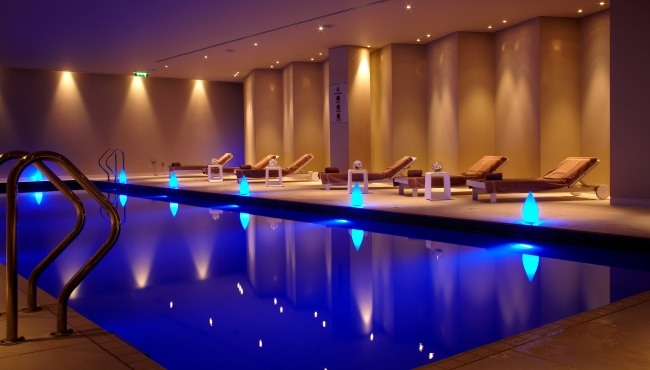 Where the Park Plaza Westminster Bridge fell down, to be honest, was service and the certain issues caused by the design.  For a start, you enter the hotel at ground level but reception is upstairs.  There is no clear signage to tell you this and I had toured the entire ground floor before realising.  This was not a good start and sends an immediate warning that all is probably not well here.

When you reach reception, the three desks are spaced very far apart.  This means that you end up forming three separate lines.  If, like me, you end up behind someone who ends up taking an age to check-in because he wants to discuss all of his questions about London, you are in for a long wait.

The best view in the hotel – a huge multi-storey atrium with a massive glass wall overlooking Big Ben – is used as the club lounge.  This means that this amazing space is blocked off from most guests.  (You can buy lounge access for the day at a supplement if you booked a standard room at a cost of £49 per day for a couple and £33 for one person.  This includes breakfast, afternoon tea and evening drinks and canapés.)

Finally, I had a surreal experience at check out.  With the hotel full for a conference, I couldn’t get a late check-out.  I therefore checked out at noon and casually said that I would pop down a swim.  I was told that this was strictly forbidden, since – as I was checked out – I would no longer be insured.  Fine, I said, give me a late check-out for 1 hour – but you can have the key as I don’t need the room.  No, I was told.  That is strictly not allowed either.  I was warned off going near the pool.

I obviously ignored this advice and headed down there anyway.  The desk was, of course, unmanned so anyone could go in. However, I then found that the pool had been rented out to a toddlers swimming class and hotel guests were banned from using it.  All very odd ….

Despite this, I do recommend the Park Plaza Westminster Bridge if you can get a studio room.  They cost an extra £50 for cash but if you have status in Club Carlson you may well get one anyway.  The extra seating area is good to have, the wide variety of eating and drinking spaces is impressive (including the cheap café) and you get good fitness facilities.  Most of prime tourist London is at your feet and, if your room faces the right way, outside your window.

Post June 1st, the hotel will cost 70,000 Club Carlson points per night.  If you convert American Express Membership Rewards points, that means 23,334 points to be transferred.  Until then, you can lock it down for 50,000 points per night for bookings at any point in the next year.

You can find out more about the hotel, and book, on the Park Plaza website here.