For some reason, Virgin Atlantic is having a one-day-and-a-bit Flash Sale on seats in Upper Class from London to Chicago.

Here is an example for October I got to price easily over at the Virgin website:

Here is the best bit.  You are, in theory, allowed a free stopover in:

A second stopover can be added for £125.

The stopover rules mean that in theory you can use the £995 fare to get to any of those places, and not bother seeing much of Chicago at all!  For example, you could do London to Los Angeles (stopover) to Chicago (must spend a Saturday night in Chicago) to London.

If you choose not to fly directly to Chicago, you will either be doing the entire trip on Delta using Virgin codeshares or on a mix of Virgin Atlantic and Delta.

If you want to stopover at somewhere other than Chicago, you should use delta.com to book.  Under ‘Fare Class’ select ‘Business (Z or higher)’.  When you are shown flights, you MUST only select those marked ‘Business (Z)’ or ‘First (P)’ which will be the cheap ones.

Here is an amazing itinerary which I priced at £896 plus £227 tax (the price goes because of the 2nd stopover).  Note that I spend a week in Atlanta, a week in Chicago and a week in New York! 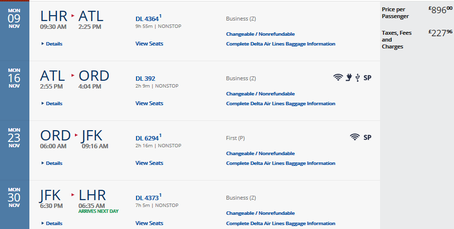 You must book this flight before midnight on Friday 28th August.  You can travel at any point until the end of June 2016, as long as you can find seats.  Remember that you need ‘Z’ in Business Class.

I can’t find any official online information about this deal but it is definitely NOT an error fare.  If you want to learn more about Virgin Upper Class, take a look at their website here.  The Clubhouse lounge at Heathrow is regarded to be one of the top 3-4 airport lounges in the world.

Have a play around at virgin-atlantic.com and see what you can find ….

(Want to earn more Virgin Flying Club miles?  Click here to see recent articles on Virgin Atlantic and Flying Club, and click here for the latest news on earning and spending other airline and hotel points.)