On Tuesday night, I was invited to the Hyatt Games, an quiz event for travel professionals at the Andaz hotel at Liverpool Street.  I am delighted to say that I lead Team 5 to victory after being put forward to represent them in the final solo play-off!  All of Team 5 were the proud recipients of a medal and a $50 Hyatt Gift Certificate!

I’ve been to the Andaz for events before but there was one part I had never seen before Tuesday.  Whilst the building was being converted back into a hotel in 2005, the builders tore down a wall and found a hidden Masonic Temple.  This had been bricked over in 1939 and forgotten about.

Here is a photo I took inside the Temple, which is now being used again: 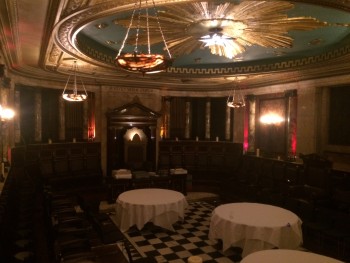 The hotel is running a series of horror movie nights in the Masonic Temple this Autumn.  You can see A Nightmare On Elm Street, The Omen, Halloween and The Exorcist.  Tickets are a bargain at £15 each, including a welcome drink, or £30 to include a two-course dinner in the Eastway restaurant.

If you want something different for a London night out, this may be something to consider.  Booking has just opened up and I was told that, based on last year, tickets are expected to sell out quickly.  Full details are on the Andaz website.

PS.  If you have ever stayed at the Andaz, you may be interested to know that it will be fully refurbished over the next two years.  During the quiet Summer periods in 2016 and 2017, half of the hotel will be taken out of action at a time in order to fully renovate every room and the public spaces with an entirely new look.