Royal Jordanian is not an airline I discuss much on Head for Points.  However, it is a member of the oneworld alliance which means you can redeem and earn British Airways Avios points and tier points with it.

RJ has just launched a great fare to Bangkok in Business Class.  It is not quite as good as some of the Qatar Airways fares we have seen recently, but this flight departs from London and does not require a side trip to Europe!

The fare is £996 return from London to Bangkok, changing in Amman.

You will earn 560 British Airways tier points for the trip according to the ba.com tier point calculator.  That is over 90% of the way to a British Airways Executive Club Silver card, although don’t forget that Silver also requires you to have taken four British Airways flights as well as earning 600 points.

Royal Jordanian is flying new Boeing 787 Dreamliner aircraft on both legs of this trip.  Their 787 Business Class is fully flat and looks decent as you can see below: 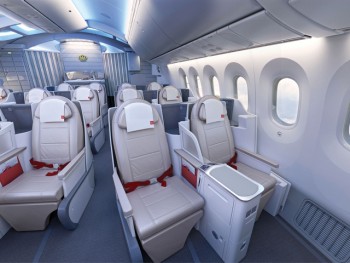 The airline is not dry on long haul routes, before anyone asks – only on intra-Middle East routes as I understand it.

Here are the fare rules:

No outbound travel between 15th December and 27th December

No inbound travel between 2nd January and 10th January

No stopovers are allowed

The fare is not available every date, but the Royal Jordanian website allows you to search via a calendar grid which clearly shows the days it is there.  You can book via the RJ website here.