It is now three weeks since the first British Airways Boeing 787-9 Dreamliner started commercial service between Heathrow and Delhi.

This is the longer version of the 787-8 and, unlike the smaller aircraft, features First Class.  BA has also ordered the forthcoming 787-10 series which will be even larger.

I am due to fly one of these next Easter.  However, since it would be a shame to wait that long for a review, I was pleased when HFP reader Alan sent me his thoughts on one of the first flights as well as some photographs.  As usual, I have edited his article and any mistakes are probably mine.

“Flying to New Delhi on 28 October with British Airways, I discovered from the seating plan that it would be Day 3 of BA’s first Boeing 787-9 Dreamliner service.

This was the first commercial flight of our aircraft.   Everything was squeaky clean and with that unusual new carpet smell.  The new fuel efficient engines also make the Dreamliner QUIETER.  Bliss.  The cabin altitude equivalent is considerably lower than a Boeing 747 and more comfortable for passengers.

The 787-9 boasts the new First pods (just eight) with more privacy than the earlier design, iPhone dock, large screen IFE and improved space and storage. First was full and passengers I spoke to after landing at Delhi were impressed. Good news for British Airways

(Raffles edit: potentially bad news for Avios collectors, since the new eight-seat First cabin is replacing the 14-seat 777 version on many routes.  This will make reward seats harder to find.)

This is the new First seat: 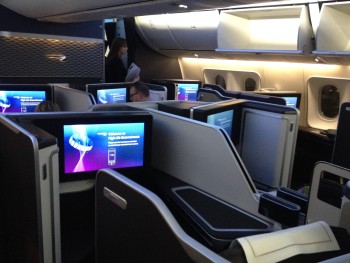 In Club World, nothing discernible has changed. On the 787-9, the 42 Club seats are split into two cabins: the front cabin is best, with just two rows of seats in a 2-3-2 configuration facing each other as usual. I was at the front in 6A. Aft of the galley is a larger 4-row Club cabin followed by World Traveller Plus (32) and 127 in World Traveller.

The crew were excellent.  The had originally trained on the 787-8 so had little time to sort themselves out with the new layout before boarding passengers. It’s not a crew friendly aircraft, apparently, due mostly to restricted space.

BA had a chance to rework their Club World offer on these new aircraft, but we still have such irritating features as:

– passengers in window seats have no direct aisle access, so clamber over sleeping passengers to get out
– hard armrests
– nail breaking table release mechanism
– shoulder dislocating reading light adjustment
– not enough storage space (just a drawer below the table

What is wrong with a herringbone layout used by other airlines?

Here is a photograph of the Club World front cabin: 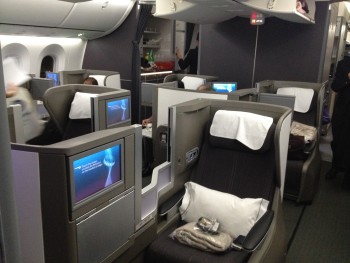 On the plus side, the in flight entertainment is much improved with a better screen and easier selection of content. I didn’t bother with the seat-to-seat “chat” facility but it could be fun (call 1A in First?)

Window blinds are replaced with ingenious touch buttons that “dim” the new, larger windows. “Mood” cabin lighting is also improved, though the bright BA logo blazes through the night on the front wall!

The meal service was spirited and fun with an enthusiastic crew. But on an 8hr+ night flight it still took 3 hours to complete the meal service and dim the lights. Galley issues?

What happened to the Club Kitchen? It’s now reduced to a sad pile of confectionery and crisp packets and a few bananas. No chilled sandwiches or salads (fruit or otherwise), let alone an ice cream! Someone slashed the budget. Shame.

(Raffled edit: there was ice-cream on our 777 flight from Dubai recently as my kids ate it!)

Six of the Club World seats wouldn’t recline properly (it’s brand new, Boeing!) so the cabin services director and crew were crawling around on the floor with a torch and tools to get them working. Not totally successfully, I heard. Mine worked perfectly.

Thanks Alan.  You can learn more about the British Airways 787-9 fleet on this special ba.com page.