This is my review of The Airport Hotel, situated inside Hamad Airport in Doha.

I think I am safe in saying that this is the only hotel in the world where you can look out of your window and see a 23 foot high teddy bear: 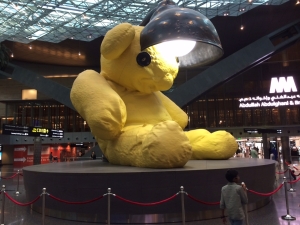 However, as I doubt you choose hotels on the basis of whether or not they have views of 23-foot tall teddy bears, I should probably tell you some more about The Airport Hotel!

I decided to stay here because my flight to Paris departed at 7.55am.  I wasn’t arriving in Doha until 7pm and it seemed relatively pointless to leave the airport – especially as I would have to pay the visa fee.  This is despite the fact that there is a Crowne Plaza nearby (Crowne Plaza Doha – The Business Park) and I could have used another night towards my Accelerate target.

I was also one night short of triggering my Hotels.com Rewards free night and The Airport Hotel was bookable through them.  Hotels.com appears to be the easiest place to book this hotel

Here is the first thing you need to know – despite being literally in the middle of the terminal, this hotel is incredibly hard to find.  It is not just me who has this problem as it crops up in many reviews.

There is only one lift to the hotel.  However, the lift is tucked behind a wall behind the bear.  There is a big sign saying ‘Airport Hotel’ and pointing in the right direction.  However, as you don’t know that there is a lift hidden behind the wall, you follow the sign.

And you follow it, and you follow it.  The problem here is that Hamad International Airport is, I think, the largest freestanding building in the world.  When a sign sends you the wrong way and you set off walking, you walk a long way before you give up and turn back.

Don’t bother asking the airport staff.  They don’t have a clue.

It took me literally 30 minutes to find the hotel after clearing incoming security.  I could have done it in 2 minutes had the hotel being signposted.

Once I got there, I was pleasantly surprised.  The rooms are not huge but are very attractively furnished: 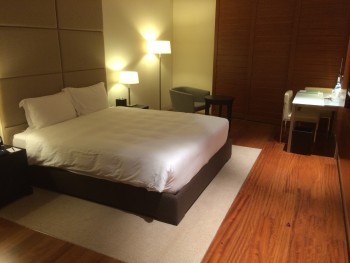 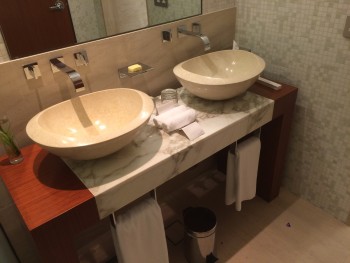 There is a swimming pool but I did not have the time to visit.  This is a library picture: 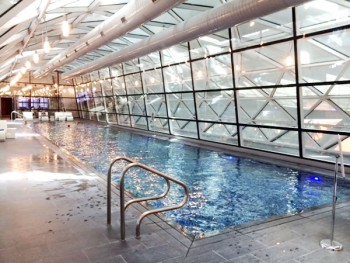 …. which looks hugely impressive (for an airport!).

Overall, once I found it, I was very happy with my 10 hours in the Airport Hotel in Doha and would stay there again.

The only downside of this hotel is that it is not cheap.  I paid roughly £160.  Once you factor in the visa fee and a taxi to the Crowne Plaza and back, however, it simply made no sense to go elsewhere.

After all, I was going to be getting up at 5am.  I didn’t want to miss any time in Qatar’s allegedly astonishing new First Class lounge before my 8am flight …..

If you are looking to book The Airport Hotel, I recommend doing what I did and using hotels.com – this lets you collect a Hotels.com Rewards credit which effectively gets you 10% of your spend back.

UK to close ALL travel corridors from Monday