This is my review of the ME Milan Il Duca hotel, operated by Melia Hotels International.

If you’ve been to Milan before, you know that this city is a popular weekend break destination with a number of high end hotel options, including a Four Seasons, Park Hyatt and the new Armani Hotel.

Last year, just in time for EXPO 2015, another luxury hotel opened its doors – the ME Milan Il Duca.  London-based readers are most likely to know the ME brand from its Norman Foster-designed property on The Strand which has a popular rooftop bar.

I (Anika, not Rob) flew to Italy for a weekend to have a look at the hotel.  With American Express Platinum cardholders now receiving free Gold status in the Melia Rewards programme, the chain is worth considering more closely.  This is especially true for weekend breaks where the guaranteed 4pm check-out for Gold members would be handy.

You can also earn Avios points via Iberia Plus for Melia stays.

Long term readers will know that Head for Points has worked closely with Melia on a couple of projects, including a major competition in 2014.  Melia provided HFP with two free nights at ME Milan Il Duca but we paid all of our other expenses including flights and incidental hotel charges. 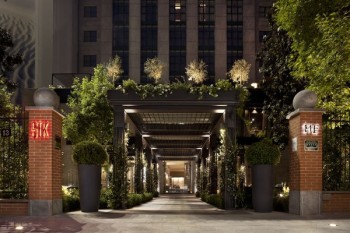 Where is the ME Milan Il Duca hotel?

The ME Milan Il Duca is right at the Piazza della Repubblica, one of Italy’s largest squares which was originally built in 1865 to accomodate Milan central station. In 1931 the station was moved 1km north but is still only about a 10 minute walk from the hotel. The ME Milan is just around the corner from the fashion district and the Porta Venezia area with Milan’s biggest park, planetarium and the Natural History Mueum. The Duomo di Milano is about 2km from the hotel and the yellow metro line takes you there within 10 minutes.

The hotel has got 132 rooms including 34 suites, a steak restaurant and two bars.  The flair of the hotel is very young, fresh and modern without trying too hard – imagine a more civilised version of a ‘W’.

I flew into Milan Linate and was told at the airport that a taxi to the hotel would be €75.  Not keen to wreck the HFP expense account, I decided to take the bus into town (€1.50) and then the tube.  On my way back I took a normal taxi from the hotel to the aiport and only paid €21.  Don’t be fooled by the fixed price taxis at the airport as even with traffic they seem to be overpriced.  Another tip, if you don’t speak Italian, is to not use the first cash machine in the arrival area as this machine does not speak English. Walk a bit further to the right and use that ATM.

Checking in was quick and efficient. A receptionist explained the operation of the lifts (first choose the level on a touch screen then scan your card for approval), showed me my room and told me how to use the aircon.

Rooms at ME Milan Il Duca

My room was on the 8th floor with a view over the city of Milan.  The category was Mode, which is the 2nd room category up. I got to have a look at all of the other categories and took some pictures as you will see later in this review.

This was the view from my window: 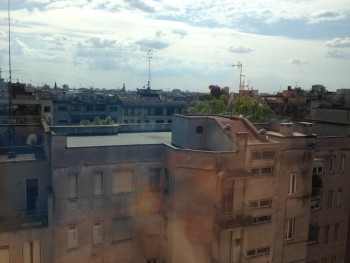 The room was very bright during the day. Don’t forget to shut the blackout curtains before you go to bed if you want to have a lie in!

The round table in the picture below (topped with delicious cupcakes when I arrived) was the only table in the room, which wasn’t ideal for working.  ME Milan has joined the ‘no desks’ trend unfortunately.

The ‘socket situation’ was not great. There was one at the bottom end of the bed but in order to charge my laptop whilst using it I had to move the table. The other socket was next to the TV which would have required me to climb over the cable.  More handy were the sockets next to the bedside tables which were handy for charging my phone overnight.

The wifi speed was OK and definitely not as slow as at the SLS Beverly Hills. I didn’t check Netflix (I simply forgot) but You Tube videos were loading just fine.  Some hotels – not this one, I should stress – need to realise that there is no point designing a property for the ‘young or young at heart’ generation and then putting in slow wifi. 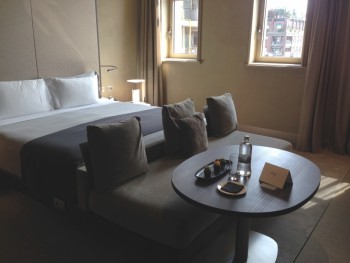 The TV had lots of international channels with the English ones being mainly news. If you want to find out what German TV is like – and I do not recommend this – you can choose from one of the 10 channels which are especially awful from around midday until early evening.  There was also an option on the TV to listen to music playlists, of which I very much enjoyed the Alternative one, and a USB port which lets you connect your own devices to the screen. 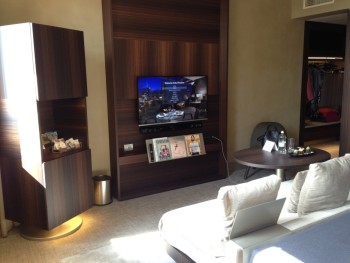 The bathroom had a sliding door which could be opened completely to connect the bathtub and sink with the rest of the room. Open bathrooms seem to be a thing these days. However I can see the advantage of the sliding door as it doesn’t take up any space in the room. 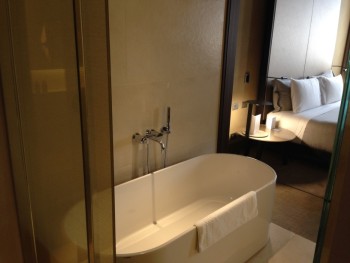 The toilet and bidet were behind a separate door opposite the shower. 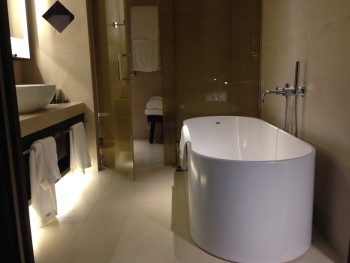 I liked the toiletries but the smell may be a bit too smell intense for some. 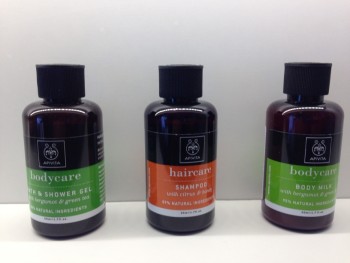 The room had no kettle but an espresso machine, which is way more important!  The capsules were by Illy and, whilst very strong, the coffee was good. 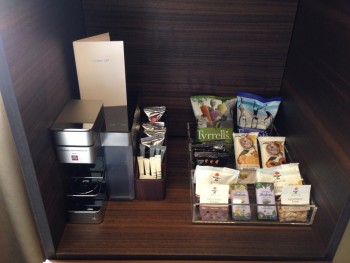 The mini bar had everything for those evening and midnight cravings but I recommend checking out the hotel’s bars instead (more on that in part two of my review). 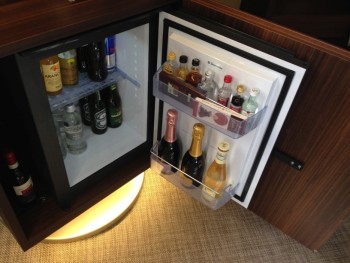 The open wardrobe had a good amount of hangers but no closed space as the two drawers were taken up by the safe, hair dryer, slippers etc. This meant that most of my clothes had to stay in the suitcase throughout my stay. 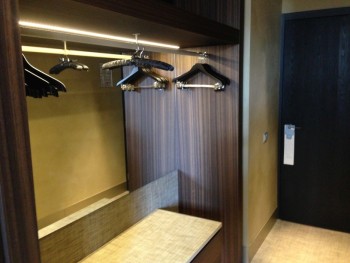 What about the other room types?

ME Milan Il Duca has 5 different room categories: Aura, Mode, Chic Suite, Personality Suite and ME Suite, of which the lattter combine to form the Presidential Suite.

I was given a tour of the different room options.  Here is a picture of the standard room, Aura.  Aura and Mode differ only slightly in size as the Aura doesn’t have a sofa. 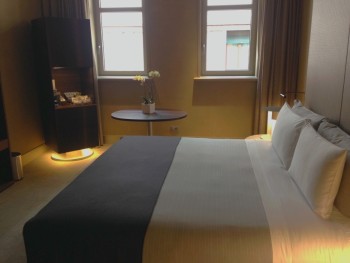 This is another room in the Mode category. As you can see the bed, sofa and table arrangement is exactly as in my room. 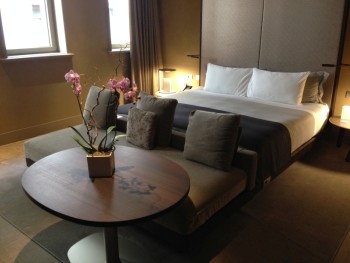 ME Milan Il Duca’s junior suite is called the Chic Suite and has got a room divider between the living and sleeping area. 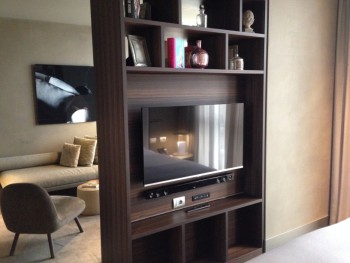 Unlike in the first two categories the bathroom in the Chic Suite is made of marble: 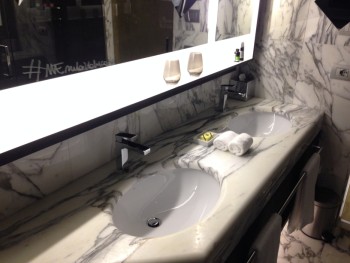 This is the living room area of the Personality Suite: 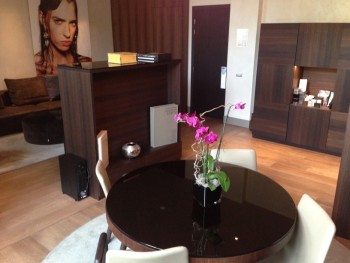 This is the suite’s private terrace. 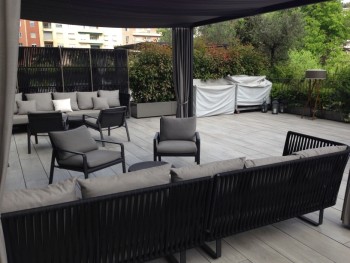 The ME Suite is bigger than the Personality Suite and has got a pool table and also a private terrace. 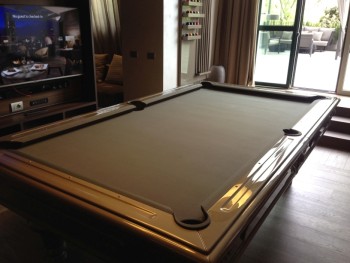 If Melia is looking to target the millennial market with the design and style of its rooms then it did a good job – at least with this millennial.  Everything within the hotel seemed in perfect harmony.

The restaurant and bar were great fun – more on that in the second part of my review of the ME Milan Il Duca which is also published today.

If you want more information on ME Milan Il Duca, the official hotel website is here.