A reader dropped me a line last night regarding Reward Flight Saver.  Her question was:

“Has the text describing RFS on ba.com changed?”

It currently says this on the booking page (click to expand): 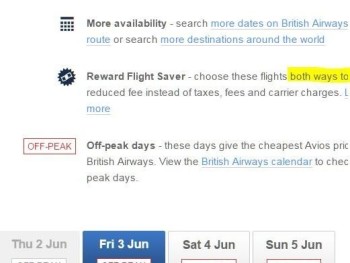 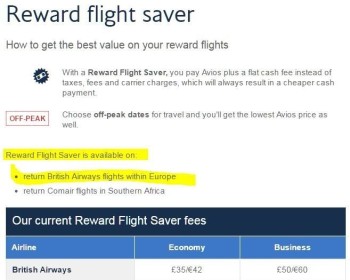 Now, this could just be ambigious wording, especially with the first image.  Nowhere does it says “one way redemptions are no longer valid for Reward Flight Saver”.  This does appear to be the implication of the text in the second image, however.

Don’t bother looking in the British Airways Executive Club terms and conditions because they are unchanged since January.

At present, RFS flights are still pricing up as they always did – ie £17.50 one way in Euro Traveller and £25 one way in Club Europe.

Regular HFP readers will know that, ever since BA dropped fuel surcharges on short haul flights, many European RFS redemptions are cheaper booked as 2 x one-way flights rather than a return.  This is because a one-way from a European airport which doesn’t charge a departure tax will only have nominal fees, usually less than £17.50 and certainly less than £25.

A one-way from Luxembourg to Heathrow, for example, only has £3 of charges.  In this scenario a Reward Flight Saver ticket defaults to the cheapest option so you only pay £3.

British Airways may have decided that it has had enough of people paying £20.50 instead of £35 for return flights to Luxembourg by booking it as 2 x one-ways.

(If you think that is petty, note that crew have reportedly just been told flowers will be removed from the loos in First Class in order to save money.  They were removed from Club World some time ago.)

There is another possible explanation.

One quirk of Reward Flight Saver is that you only pay the reduced taxes figure when you choose British Airways for all legs.

If you mix BA with another airline on the same ticket, you pay full taxes on the BA flight.

At present, this is only really a problem via ba.com on one route – London to Madrid.  Booking BA one way and Iberia the other way triggers full taxes on the BA flight.

However, if we assume that Aer Lingus availability will soon be bookable online, as well as the fact that Royal Air Maroc is about to become an Avios partner, it will be cropping up as an issue more often.

The ba.com wording may just be an attempt to clarify the fact that you need to book both the outbound and return on British Airways, and not mix in Iberia, Aer Lingus or Royal Air Maroc, to get the discount on the BA flight.

For clarity, as I mentioned above, ba.com still shows the standard pricing for RFS tickets and nothing has changed.