There are, I suppose, some people out there who consider a mini bag of crisps (average content – 4ish) to fulfil the dictionary definition of a ‘snack’.

For the rest of us, the ‘free food and drink’ offered by British Airways in Euro Traveller has been an embarrassment for many years.  Many of us remember the happy days of the Gate Gourmet catering strike a few years ago, when a lack of food on board meant that status passengers could pick up a (pretty impressive) ‘tuck box’ in the lounge for free to take with them.

A number of speculative articles in the press over the last couple of days suggest that BA has now decided to axe free food and drink in Euro Traveller.  I first heard about this from crew gossip a few weeks ago but there has been nothing in writing, and it still appears to be based on rumour – albeit that BA would presumably have jumped on the story when it first hit the press if it were untrue.

Even if it does happen, it will be at least 12 months away.  There is nothing happening at even the most high level cabin crew / management discussion groups.  More importantly, it would be difficult to implement with less than 12 months notice because passengers with tickets issued before any change would have a contractual right to free food and drink.

It may all be nonsense.

Not that I’m suggesting Simon Calder (who started the rumour) is getting his information from social networking sites but ….

easyJet make this model work successfully with, generally, four cabin crew.  Two prepare and deliver food orders whilst the other two sell drinks and ambient snacks from the trolley.  This works well.

It is not impossible that this would work, but it would require a bit of dexterity.  On a busy short flight like Amsterdam it would be virtually impossible to serve a full cabin.  You would probably need to make everything paid-for (ie no free drinks either) in order to reduce the number of orders to a manageable level. 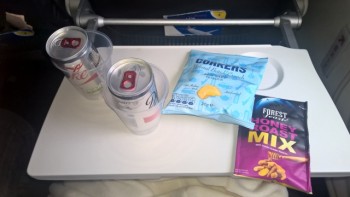 Is it a bad idea per se?

I had a toasted ham and cheese sandwich on my easyJet flight to Paris last month and it was perfectly fine.  I think I ended up paying £6.50 for a meal deal which included a coffee and, forced on me because it was effectively free, a jumbo Kit Kat!

I think the majority of hungry passengers would prefer a toasted sandwich to the free BA offering (example pictured above).  Drinks are different, of course.  All that happen here is that you would be going from free wine to paid wine – a clear drop in standards.

You are also left with the question of what will happen to Club Europe.  Will they simply be offered a free item from the paid menu (which at times would be an improvement and an other times a big cut) or would they get a ‘take it or leave it’ meal for free whilst Euro Traveller gets a totally different buy on board menu?

At the end of the day, BA’s obsession with competing with low cost carriers is pointless.  Most flights operate from Heathrow and Heathrow is not served by low cost carriers.  Airlines operating from other airports have a head start on costs due to airport fees (the Heathrow Passenger Service Charge is now £29.81) so fighting on price will never work.

The risk, as with the cut in Club Europe leg room last year, is that you start to lose high yield long haul business class passengers because they refuse to fly your short haul product for the final leg.

Finally, it is about time that BA stops the myth that short haul flying is unprofitable.  The new On Business programme is a revenue based, as we have discussed before.  If you look at how long haul flights with a short haul connection are treated, the points awarded for the short haul are pitiful based on a couple of examples I’ve seen.  Logically, this must be the £ number that BA uses for its internal accounting – a number which bears no relation to the value of that short haul flight.