Regular readers may remember that, back in May, I wrote about an Avios redemption I had booked which was – by a large margin – the most lucrative I have ever done.

I thought it only fair that I conclude the story with a review of the flight itself.

Back in Spring, my wife booked us into a family focussed hotel in the Dolomites near Innsbruck for a week.  I am there as I type this and it is genuinely astonishing in terms of how they have combined a luxury hotel with more kids facilities than you can ever imagine – all set in a picture-perfect Italian hillside village.   It has won various awards for the best family hotel in the world.  (The hotel website is here.)

Because she wanted a two week break from the office, she wanted to add a week in Mallorca beforehand.  This meant that we needed to get from Mallorca to Innsbruck on a fixed day in August.  You can imagine, when I typed that request into Expedia, I wasn’t very hopeful.

Amazingly, such a flight exists.  NIKI, the Austrian low cost airline now owned by airberlin, flies it during Summer.  I couldn’t believe it.

I then saw the price.  €331 per person, one way.  Impressive pricing for a low cost airline but it was a peak time flight on a Saturday in August.  And I didn’t have many alternatives.

airberlin, of course, is a oneworld alliance member.  This means that I can books its flights with Avios points on ba.com.  More out of hope than anything else, I went onto ba.com to see what was available.  Amazingly, there were SIX economy seats available for Avios on the flight. 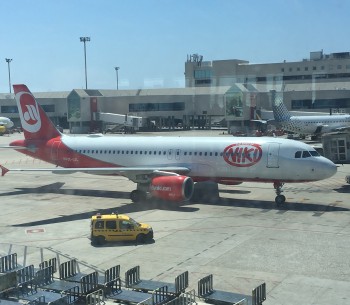 After booking, airberlin was keen to charge me for a seat reservation.  However, I rang their call centre and they were happy to book us into Row 14 for free because of my British Airways status.

Row 14 is the first row they will allocate for elites.  The first 13 rows they try to sell for an additional cost.

This actually worked out well for us.  Rows 12 and 13 were the emergency exits which sell for an even higher premium.  Demand was so low that there was a row of three emergency exit seats empty directly in front of me in Row 13, so I switched after take-off.  Three seats to yourself in an emergency exit row is not bad!

Sadly my wife had to remain in 14 A/B/C with the children as kids cannot sit on exit rows! 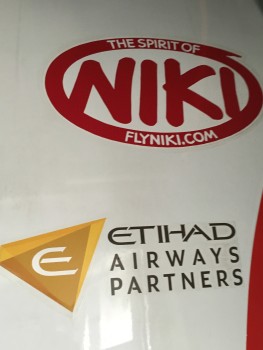 airberlin is the biggest airline operating out of Palma.  You can imagine the scene at the check-in queue on a Saturday in August – it was horrendous.

Luckily, directly opposite, was a premium check-in desk.  This had a grand total of one person queuing at it, which was at least 199 fewer people than were in the main queue.   A quick wave of my British Airways card via the BA smartphone app and we were allowed in.

We were not charged for our three suitcases.  There are two potential reasons for this:

we were let off due to my British Airways status

I’m not sure which applied in our case.  In any event, I was deliriously happy to have skipped a massive queue and not paid for our luggage.  We also got Fast Track security due to our status. 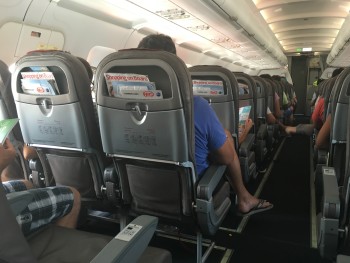 There are two Priority Pass lounges in Palma but neither was on the C concourse.  We didn’t have too much time so we just took a seat and bought a sandwich.

The crew looked about 16 years of age.  I’m sure they weren’t, but we had a 16-year staying with us recently and he looked just as old as the male crew member ….  His female colleague looked about 19.  Both were wearing jeans.

airberlin is soon to start charging for all on-board food and drink.  At present, you still get (half a) salami or cheese sandwich and a cup of coffee.  The salami ran out on Row 14 – my daughter got the last one.  Alcoholic drinks are available if you pay. 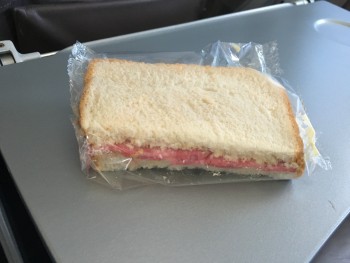 There isn’t much more to say.  Seat pitch in Row 14 was officially 30 inches but seemed more generous than the 30 inch pitch on British Airways – the seat (a Recaro slimline one) may have been thinner.  I am 6’2′ but my knees still had a small gap between the seat in front.  Once I moved to the empty emergency row 13 I had lots of space. 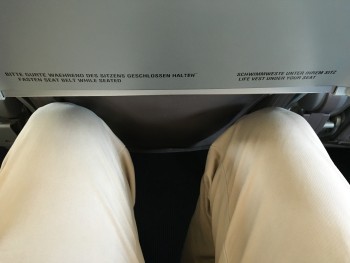 There is some IFE – a TV programme was played on the overhead screens.  It seems that you had to bring your own headphones and it was almost certainly in German anyway: 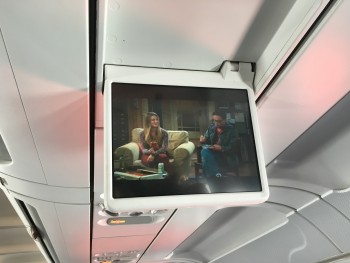 The flight itself was uneventful, except for the round of applause given by the passengers on landing ….

Innsbruck is a tiny airport.  It was a bit odd to walk straight out of the airport with no passport check!  The luggage belts are literally 10 metres from the entrance to the terminal from the tarmac – it couldn’t be easier.

It is worth taking a look at some of the obscure routes flown by airberlin as there are some interesting options.  Anika needed a flight out of Split on a particuar date next month, for example.  BA wanted over £400 one way (economy) and there was nothing for Avios or On Business points.  The problem was solved with an airberlin flight on Avios from Split to Vienna and then a connection to BA.  ba.com isn’t very good at throwing up connections like this so you need to do your homework with the route map on the airberlin website.