British Airways has a new lounge in Copenhagen

A new lounge opened at Copenhagen Airport last week – “Eventyr”, operated by Menzies.  British Airways has adopted this as its lounge instead of the “Aviator’ facility which is still open.  A photo is below.

The new lounge is by Gate 26, in the non-Schengen area, very close to where the BA flights usually depart.  A reader who was there just after it opened reported that it is “small and nicely appointed” (it is advertised as having 200 seats) with – in the morning – a small bar selection, scrambled eggs and sausages, pastries and fresh fruit.  The reading material on offer was limited to “Eurowoman” and “Euroman” however …..

According to this airport press release, entry is available to anyone on payment of a DKK 250 fee. 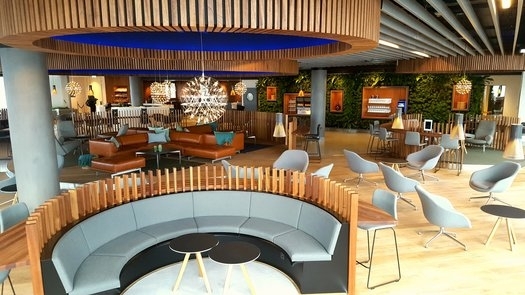 The new ‘Diamond status extension’ feature is live as of yesterday.

This is the second of the changes which kicked in last week with the major restructuring of their redemption system.  Frankly, ‘Diamond extensions’ are a very tiny dessert course (more like the free mint with your coffee) compared to that.

This is the new benefit – eligible Diamond members can extend, one time only, their status for one year, no questions asked, if they are unlikely to requalify under the standard nights or points rules.  You can apply via this page here and the deadline is 31st March.

Not many people will be able to activate this.  It only applies if:

have stayed at least 250 nights or earned 500,000 base points since you joined Hilton Honors

This is definitely a feature worth having, but not something worth making a big song and dance over in my view.

Where we’re going this week

Don’t turn up at our office this week for a coffee because we won’t be there.

The review trips we do on HfP usually need a few things to come together to justify the time.  We can’t give up 3-4 days for a single flight or hotel review unless it is somewhere one of us really wants to visit.  We have a list of hotels we’d like to try and flights we’d like to do and we look for ways of weaving them together.

Three things came together for me this week:

Jumeirah Zabeel Saray (above), a beach resort on The Palm in Dubai, offered me a few free nights for a review.  As we’re off to Asia at Easter this year instead of the Middle East, I could justify the trip.  I stayed at Zabeel back in 2012 just after it opened, for cash, and reviewed it here with mixed feelings.  A lot has changed since then and I’m keen to take another look.

I had quite a few Etihad Guest miles heading towards expiry – so it made sense to top them up via some Amex points and book myself a one-way Etihad A380 First Class Apartment down to Abu Dhabi.  I have flown this before but I’d be mad to turn down the chance to do it again.

To top it off, I’ve used Amex Membership Rewards points to book myself Emirates First Class back.  I have flown this before but not since 2008 – before I started the site – so I’ve never reviewed it.  I might even try the showers this time.

Meanwhile, Anika is off to ITB in Berlin.  This is the world’s biggest travel trade show, making World Travel Market (which I think is the biggest trade show held in London) look like a school fair.  I’ve never been because hotel rates tend to get very steep, but Anika has a sofa bed to crash on.

More on all this over the next couple of weeks – the ITB news should be up promptly but my reviews may take a while to get finished.