This is my review of The Ritz-Carlton Kyoto hotel.

As with my other Asia reviews this month, it is less comprehensive than usual.  We were not on a review trip, we did not get a hotel tour, we did not see other rooms apart from our room and, as we had small children with us, we didn’t eat in any of the hotel restaurants apart from breakfast.  You should get a good feel for the hotel though.

The official hotel website is here if you want to find out more.

During the peak March / April tourist season, hotels in Kyoto are ludicrously expensive.  The Ritz-Carlton Kyoto was selling for £1,100 per night during our visit and was full.  And we needed two rooms!  This was exactly the right time to get some hotel points into use.

70,000 Marriott Rewards points per room per night – equivalent (as the points came from Starwood) to 23,333 Starwood Preferred Guest points per night – have never been better spent.   If I had transferred these across from Amex, I would have used roughly 45,000 Amex Membership Rewards points for a £1,100 room.

Is this the best The Ritz-Carlton?

If you’re as old as me, you will remember when Four Seasons and The Ritz-Carlton were on a par as the leading upscale hotel groups.  Back in 1995, however, Marriott acquired The Ritz-Carlton and the brand began its descent.  It became a bit like Conrad or Waldorf Astoria or InterContinental – you got the impression that they would put The Ritz-Carlton brand above the door as long as the owner spent £x on interior design, irrespective of service quality.

The Ritz-Carlton Battery Park in New York is endemic of this, in my view.  The hotel has virtually no public space – there is basically a reception desk and lifts to the rooms when you enter.  (It does have a decent bar overlooking the Hudson.)  Where is the luxury in this?  It felt as if the hotel was only there so that Marriott could sell The Ritz-Carlton-branded apartments in the same complex for a premium price.  The Ritz-Carlton Boston where I have also stayed suffers from similar issues.

My last visit was Penha Longha just outside Lisbon.  This was, frankly, poor, particularly the pool.  The hotel was a neglected adjunct to a golf course.

The buzz surrounding The Ritz-Carlton Kyoto since it opened three years ago had been impressive, however.  As we never ate in the restaurants or used the spa we didn’t get the full experience, but what we saw impressed the heck out of us. 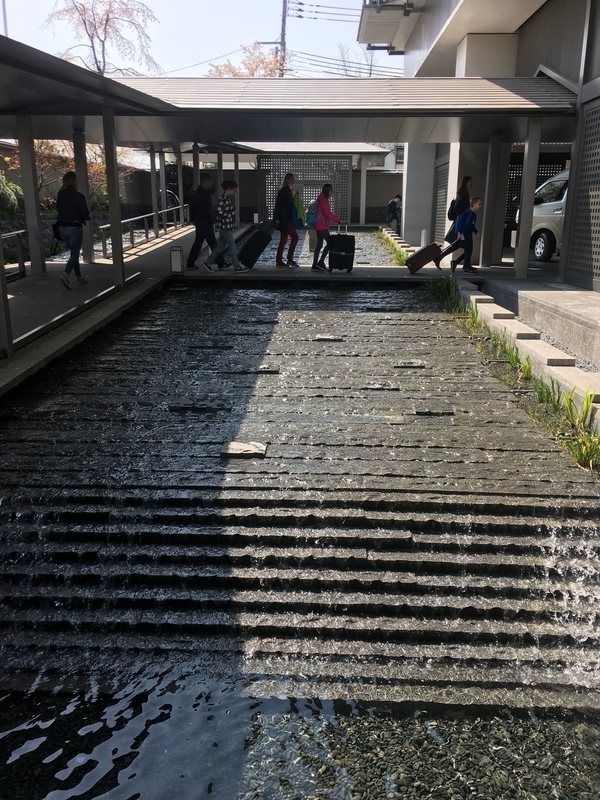 Where is The Ritz-Carlton Kyoto?

The Ritz-Carlton Kyoto is on the edge of the city centre in a riverside spot.  It is a 10 minute taxi ride from the bullet train station which is on the other side of town.  I initially thought that the station was in the centre, but it turns out that The Ritz-Carlton is actually in a great position and you are literally 2-3 minutes walk from the very low key centre.

Here is a library shot of the exterior: 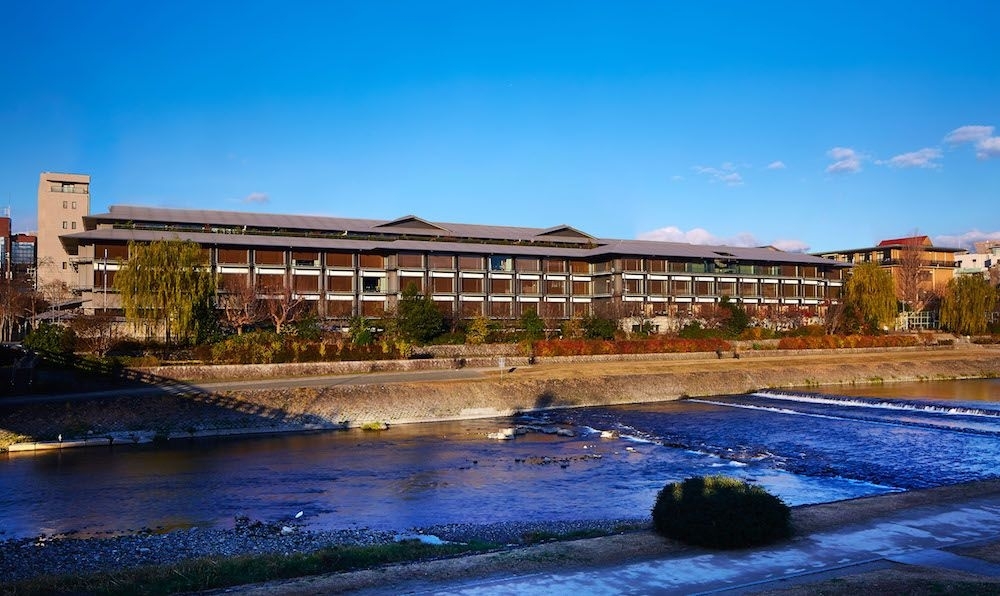 Photos alone don’t really do justice to the interior.  It is, effectively, a stage set.  Things happen purely for effect.

You walk into the entrance through black sliding doors which close behind you.  You are in a small atrium with some armchairs and a concierge desk.  For no practical reason, there is a 2nd set of black sliding doors in front of you which open to reveal the amazing lobby.  As a visual effect it works incredibly well. 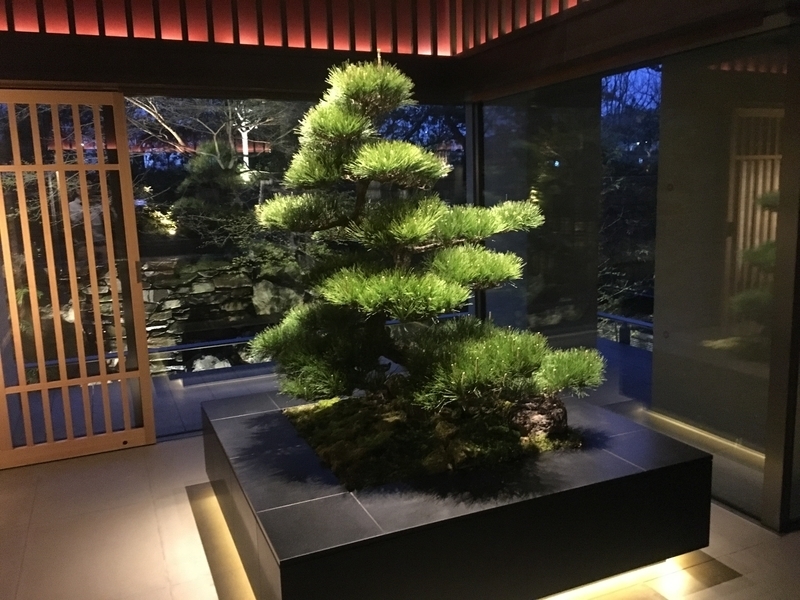 The footprint is rectangular.  As you enter the lobby, you see that a third of the space is filled with a wide beautifully lit staircase taking you down to the basement where there is a spa and bridal salon (but no standard gift shop).  Most hotels would have stuck in a lift. 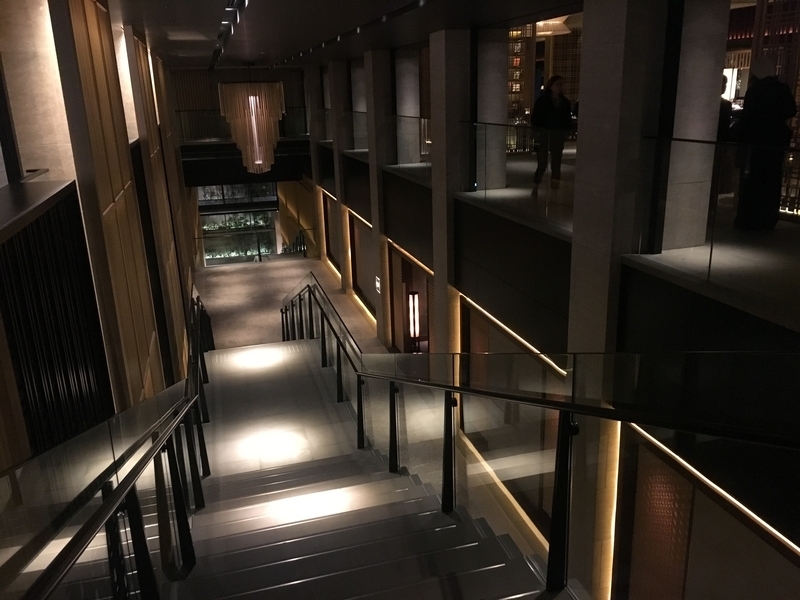 To get to reception you must pass the Pierre Herme Paris patisserie.  Whilst there is a reception desk, formalities are done on sofas nearby.

This is where it went a bit wrong.  Despite a 3pm check-in time, our rooms were not ready at 3.45pm when we arrived.  After some gentle prodding, the hotel agreed to comp us afternoon tea in the impressive lobby lounge: 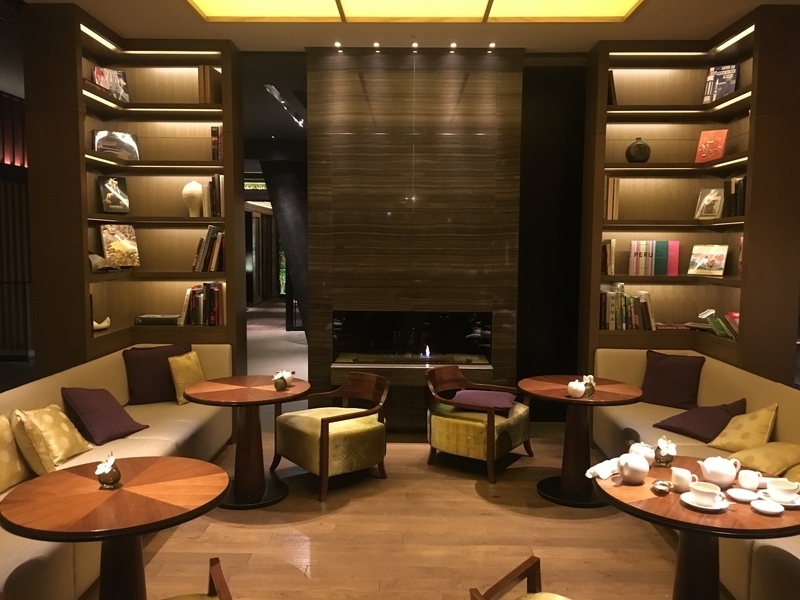 Ironically service was slow and our room was done before our tea and cakes had arrived but they were happy for us to continue.  The hotel also waived the extra bed charge for our children.

More impressively, though, when we left The Ritz-Carlton two days later we ordered a taxi through the hotel to take us to the bullet train.  The receptionist insisted that the hotel pay for this because of the check-in delay we suffered 48 hours earlier.  This was a kind gesture which impressed us far above its monetary value (£10).

After our relatively cramped Conrad Tokyo room, it was a relief to get a large space at The Ritz-Carlton Kyoto in what was still a standard room.  Our view was nothing to speak of (it faced a neighbouring office building) but with people paying £1,100 a night you can’t argue if the hotel gives them the riverside rooms. 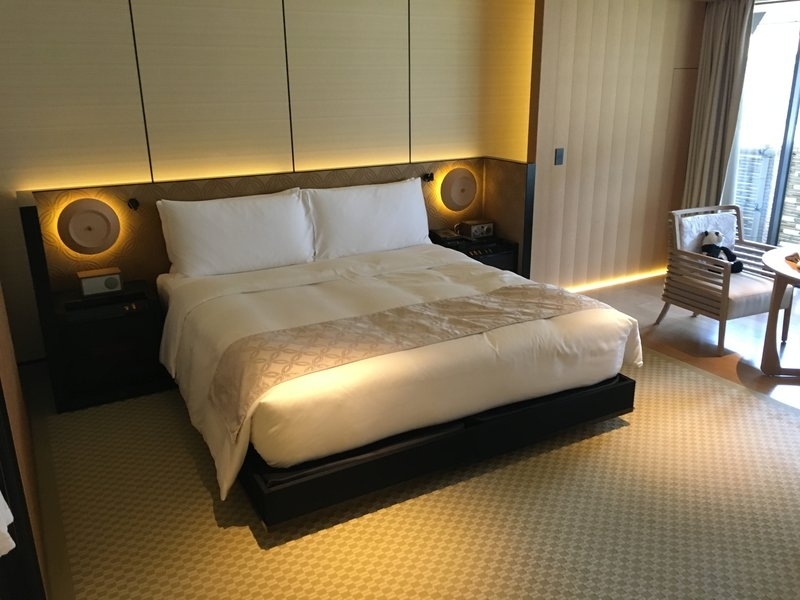 The rollaway bed for our son fitted nicely into the dining area by the window which meant that we didn’t lose any floor space, impressively.  The photo below was taken before they brought his bed up: 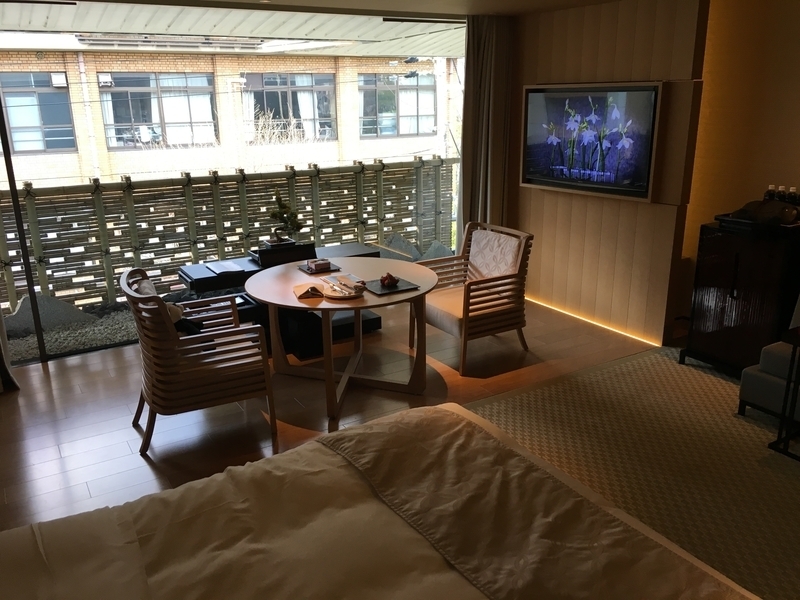 The room was beautiful with every little detail taken care of.  The wetroom / shower / bathroom had a slatted wooden floor which was novel. 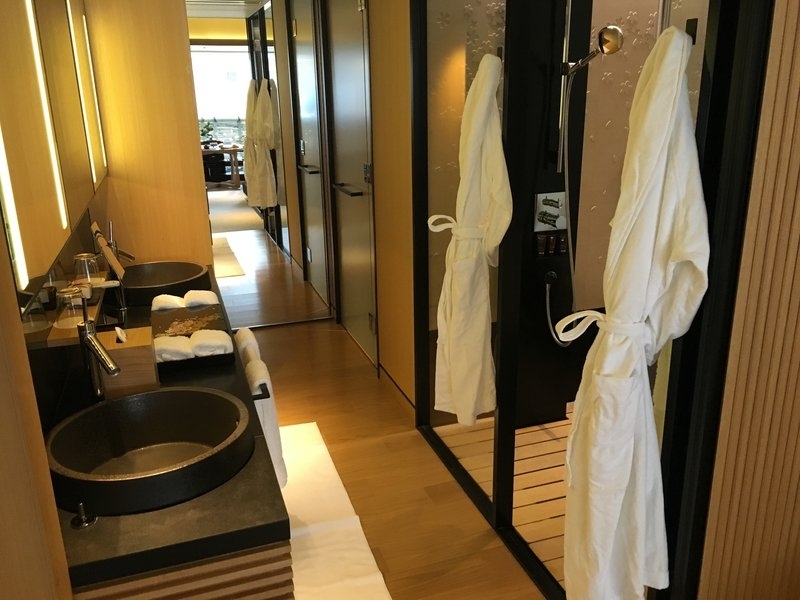 The bath was huge. 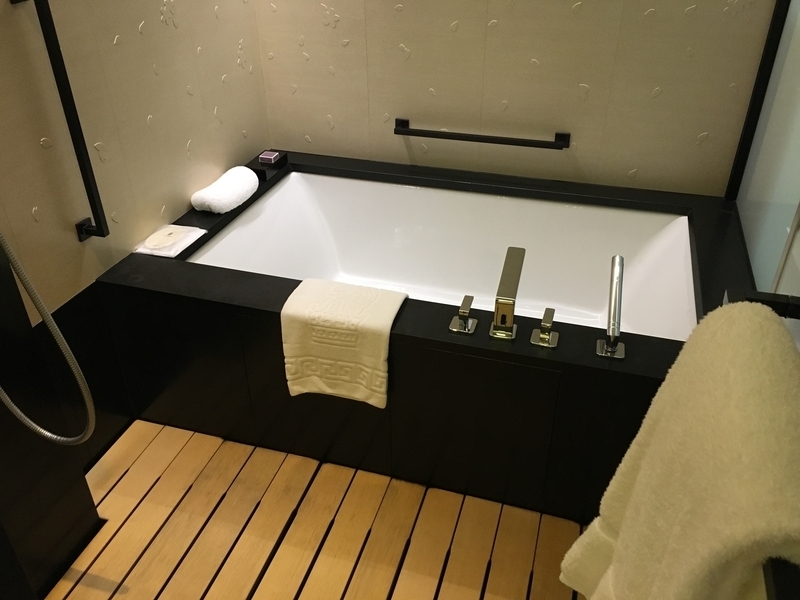 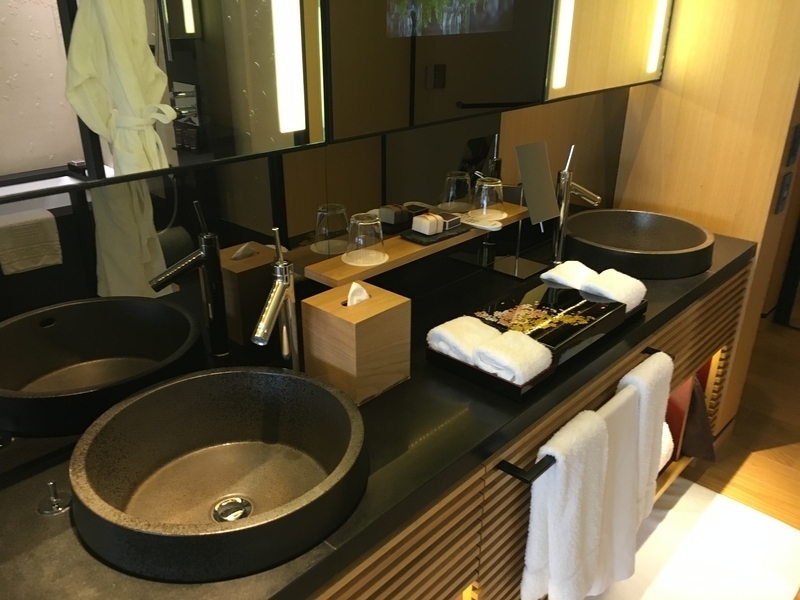 Like Conrad Tokyo, The Ritz-Carlton Kyoto has a long narrow – and fairly shallow, as is normal in Asia – pool and sauna complex.  Whilst at basement level, the use of stones outside, which have water running down them, gives it an impressive feel. 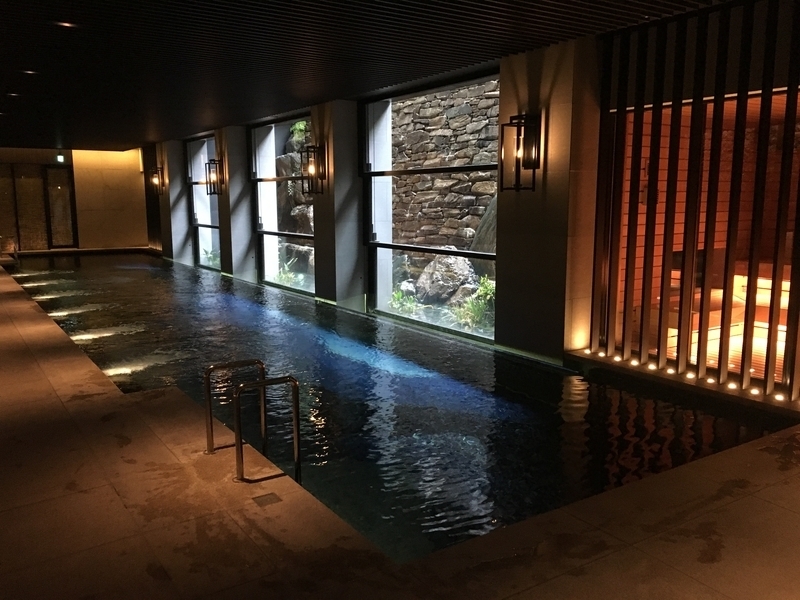 Breakfast is served in the main restaurant but, again, nothing here is done entirely normally.  The food is split across 5-6 stations using every available surface.   The bar is covered in food, but so is the wine room and a room where pieces of meat hang in cupboards!

Only one aspect jarred.  Various breakfast items, such as the muesli and a mango yoghurt, were marked as being ‘created by Pierre Herme Paris’.  This seemed a little OTT.

The restaurant contains a traditional Japanese house built at the start of the last century and which contains wood from the 19th century.  The house was reconstructed in the restaurant and is used for private dining function.  It sounds crazy, but it works. 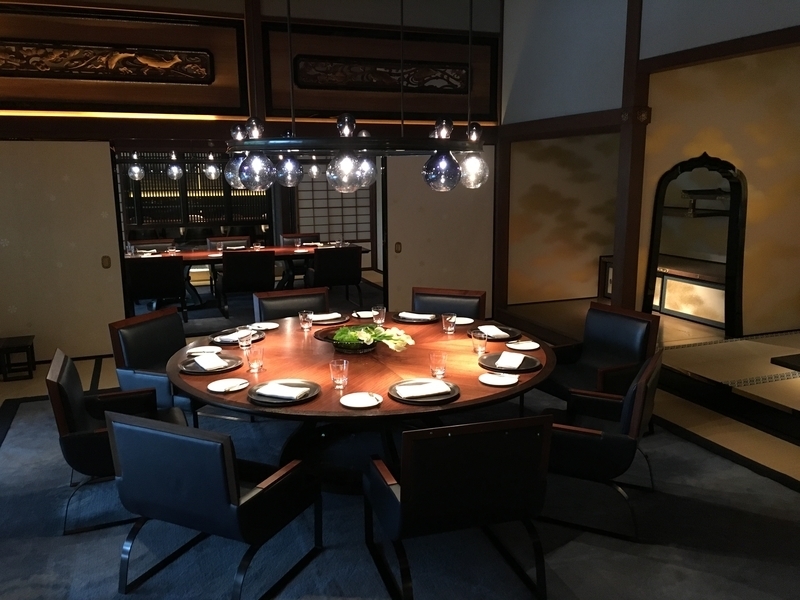 We’ve only really touched the surface in this review of what is a fantastic property.  The amount of thought that has gone into every little detail at The Ritz-Carlton Kyoto, together with the hugely positive attitude of the staff, gave our entire stay a sense of theatre.  It is hard to think of a better use of Marriott Rewards points.

The Ritz-Carlton Kyoto website is here if you want to find out more.

I ran an extra article today with photos from Kyoto.  Click here to see our Kyoto photographs.